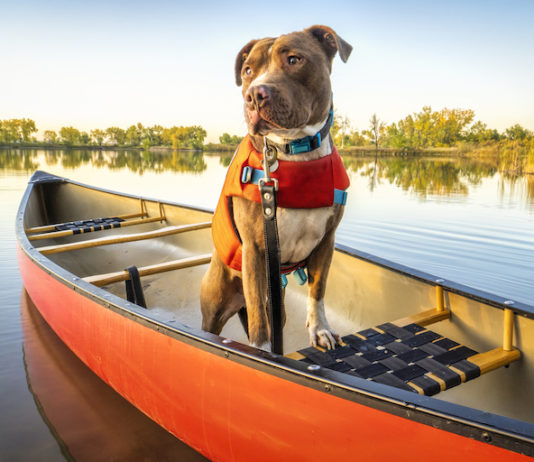 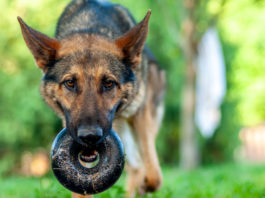 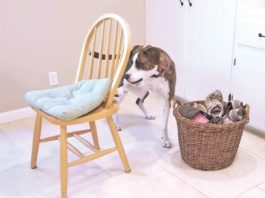 How to Play “Search Me!” 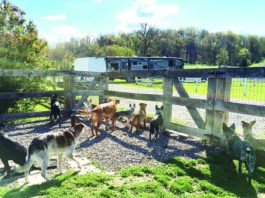 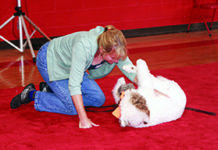 Tricks, Games, Sports Stephanie Colman
0
The team glides across the obedience ring with the precision of Olympic synchronized swimmers. As the handler strides into the 180-degree about turn, the dog remains in perfect heel position. There’s an obedience title at stake, and so far, the team is on-course to qualify. And then it happens: the dog misses an exercise. The team has just been disqualified. There are two extreme alternate endings to this scenario.

A Strong Recall is Critical During Your Dog’s Water Play

Tricks, Games, Sports Stephanie Colman
0
No matter how strong your dog’s recall may be (and we recommend it be quite strong if you’re considering letting your dog off-leash at the beach, lake, or river), it’s important to remember that the excitement of being in the water, coupled with the potential desire to swim out for a toy or chase a flock of ducks, could result in his recall falling on deaf ears. Prior to fun water play, consider brushing up on your dog’s recall with the following... 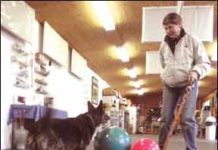 Tricks, Games, Sports Pat Miller, CBCC-KA, CPDT-KA
0
but so are any dogs that like to play with balls and dogs that enjoy shaping games. This is Kula 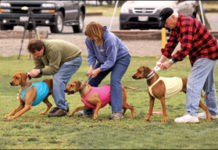 Get Your Dog Involved In Some Form of Sporting Activity

Tricks, Games, Sports Terry Long
0
We have had great fun over the past year and a half, taking a look at 16 different canine sports. The breadth and diversity of activities people undertake with their dogs is truly amazing. Activities that started out simply as something fun to do with your dog have been turned into formal sports complete with rules, regulations, and ribbons. You can swim to boaters' rescue, pull a load of freight, toss plastic discs high into the air for your buddy to catch or, if the mood strikes, dance with your dog. Some sports involve dogs and humans working closely together toward a mutual goal while others provide the dog an opportunity to work independently. 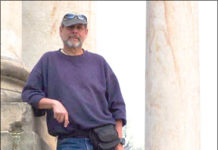 Tricks, Games, Sports Terry Long
0
Depending on who you talk to, “hunting dog” means very different things. The only thing in common may very well be that the human end of the leash historically toted a gun in pursuit of some type of “game.” The game in question was not after-dinner parlor entertainment, but the entree on your dinner table. That might be pheasant, duck, or squirrel. Through hundreds of years, the real-life pursuit of food for one’s family has morphed into a competitive sport for people who rely upon Safeway to meet their nutritional needs. 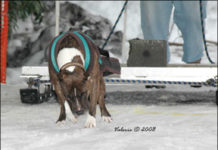 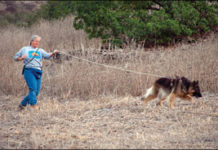 Tricks, Games, Sports Terry Long
0
The sport of American Kennel Club (AKC) tracking started out as a stepchild to its competition obedience Utility Dog (UD) title. Although you needed to pass a separate tracking test to earn your UD title between 1936 and 1946, tracking garnered a one-paragraph description in the rules and regulations of the time. Fans of tracking pushed for changes in the rules as a result of increased understanding of scent work and, in 1947, tracking became a separate class. The Tracking Dog (TD) title was the only tracking title available until 1980 when the Tracking Dog Excellent (TDX) title was added. 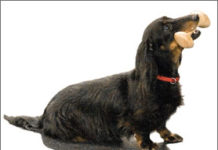 Tricks, Games, Sports Terry Long
0
You could hear a pin drop. The bleachers and chairs are jammed with an audience holding its collective breath as the handler-dog team on the floor completes their final exercise in the American Kennel Club's (AKC) National Obedience Invitational, an annual event that tests the best in the sport. The team that wins this final round has competed for several days in multiple classes, demonstrating the mental and physical stamina, as well as the training chops

Tricks, Games, Sports Terry Long
0
The curly brown dog stamped his feet and stared at his handler. He had retrieved the plastic dummy countless times. Now what? Something as simple as that look is all it took to start Kathryn Monroe of Mahtomedi, Minnesota, on a quest. It would ultimately take her across the country in search of the knowledge and skills to train her Portuguese Water Dog, Gaucho, to do what his breeding dictated. Work. Water work, specifically. Like many people, Monroe had gotten involved with a breed because she was looking for a dog with an affinity for something she loved. Monroe is a boater. When asked if she had water sports in mind when she chose a PWD, she said, Water sports? I hate water sports! I don't swim

Tricks, Games, Sports Terry Long
0
Fetch. Drive. Flank. Come-bye. Go-bye. Way to me. Outruns. Flight zones. Pressure point. That'll do! The sport of herding has a unique vocabulary that distinguishes it from all the other canine sports. In addition to basic obedience cues such as sit, down, stay, and come, dogs are trained to respond to cues that tell them when to start moving livestock, in which direction to move them, when to stop moving them, when and how to move them into pens, and how to use their physical presence to pressure the stock to move but not to scare them into running or stampeding. There is dirt, there is dust, there is livestock that can break bones and bruise a body, and there is livestock poop. And herding teams love it all. 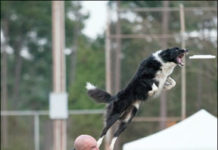 Tricks, Games, Sports Terry Long
0
The cattle dog-mix races across the turf, his claws digging into the ground, pushing hard into his next stride, building momentum, faster, faster, faster. With a final turbo blast powered by his rear legs, he pushes off the ground and vaults into the air, seemingly weightless as he stretches his neck into the sky. A sudden twist of shoulders propels his torso and hips 180 degrees as he changes direction midair and snatches the prize from the air - a simple, round plastic disc. Eyes alight with the thrill of the chase and the kill (catch), he lands nimbly and races back to his handler. Can we do it again? Can we, can we? Yeah, we can. This is the sport of disc dog. It's been around since Frisbees became popular in the early 1970s and the players' dogs chased the players' errant tosses. When a bad toss resulted in a disc rolling on its side, that was fine by Fido.

Tricks, Games, Sports Terry Long
0
Agility is probably the most popular and best known of all the sports for canine athletes. It's easy to see why. Your dog gets to do what dogs like to do: move around, jump, run, climb on things, and play! Agility is a high-speed sport in which the handler directs her dog through an obstacle course of jumps, tunnels, weave poles, teeter-totter, and other obstacles. The goal is for the dog to complete the course without exceeding the standard course time" and without incurring any "faults." Faults include knocking jump bars
1234...7Page 3 of 7