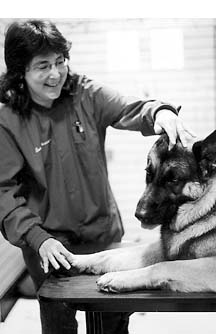 Those of us who like dogs can’t help but touch them. We are irresistibly drawn to adore them with our hands, to pet them, stroke them, rub their ears, and get lost in the ecstasy of dog beneath our fingertips. Dogs pull not only our hearts but also our hands into a companionship of touch, a relationship we hope is mutually satisfying.

Caressing a dog can be a direct line to nirvana, calming nerves, lifting mood, relieving suffering, a spiritual experience that soothes the soul.

Touching a dog feels so good because our body responds with a release of the neurochemicals of pleasure that have positive physiological effects as well.

During the past couple of decades, science has proven what we canine lovers have always known: petting a dog is good for you. Studies have shown it lowers blood pressure, decreases cholesterol levels, and reduces the risk of heart disease. Alzheimer’s and AIDS patients, autistic children, and nursing home residents often improve when they have contact with a dog. Pain, grief, stress, depression – the list of studied situations where petting a dog has proven beneficial to humans is lengthy.

“When I got my dogs, I wanted to touch them,” says Kathy Diamond Davis, author of Therapy Dogs: Training Your Dog to Reach Others. “I have rheumatoid arthritis and when I touch them, it relieves the pain.”

But what about the dogs? Are there benefits for them?

Until quite recently, these questions were seldom considered and studied even less. Mostly these experiments evaluated the impact of researchers on laboratory animals, or, the effect of lack of touch on long-term personality development.

“There has been little research looking at the effects of dogs interacting with people,” says Rebecca Johnson, PhD, RN, and director for research at the Center for the Study of Animal Wellness at the College of Veterinary Medicine, University of Missouri, Columbia. “Now we are interested in the animal side of the equation.”

The Chemistry of Touch

Dr. Johnson and her veterinarian colleague, Richard Meadows, DVM, began an ongoing study in 2002 that involves people, dogs, and a robotic dog. Although the study is looking for new means to treat human illnesses such as depression and cancer, it’s also geared to determine if beneficial chemical changes occur in petted dogs.

In a quiet room, participants are instructed to pet their dogs; in some iterations of the test, an unfamiliar but friendly dog or a canine robot is used. Prior to beginning, blood is drawn from both the human and the dog, and their blood pressure is monitored continuously. After both the human and dog experience a 10 percent decrease in blood pressure, the experiment is stopped and blood is drawn again.

“The dogs are like sponges in enjoying the petting,” Johnson says. “Their blood pressure goes down, no problem. But the humans take longer.” Some dogs have even gone to sleep.

In future studies, the researchers hope to explore the impact of quantity of touch on dogs as this may help to further explain the chemical changes that occur during petting. Says Dr. Johnson, “We are always trying to uncover answers on how the human-animal bond works.”

Released in response to gentle touch, neurotransmitters affect bodily functions in a positive manner. “Petting has broad physiologic effects on the cardiovascular system of the dog,” says Franklin McMillan, DVM, DACVIM, coauthor of the forthcoming book, Unlocking the Animal Mind.

In “Exploring the Bond,” Dr. McMillan cited data from recent studies describing the physiological, health, and emotional effects of touch on animals.

One study found that as a result of touch, a dog’s coronary artery blood flow increased to the same level as during intense exercise. The heart rate of dogs increased when a person joined them in a room, but would drop dramatically within one or two seconds of being stroked.

In another study, whenever dogs were exposed to a stressful stimulus such as pain or fear, their heart rate and blood pressure decreased significantly if they were petted.

Neurotransmitters associated with positive touch also affect behavior and emotion. Observed animals who were routinely touched were found to be more resistant to stress. In addition, their separation anxiety was diminished, they displayed less fear, and their learning capabilities were enhanced.

Researchers at the Biofeedback Institute in Boulder, Colorado, discovered that stroking horses (also humans and one dog) had a measurable effect on brain waves. The wave patterns were those often associated with optimal brain function, creativity, learning, or relaxation.

The way in which we touch our dogs is important.

“I have video that I show veterinarians on how to correctly pet a dog. The same dog goes from relaxed to ‘on guard’ then back to relaxed again in about two minutes, just based on petting,” says Karen Overall, VMD, PhD, DACVB, and research associate in the Center for Neurobiology and Behavior at the University of Pennsylvania Medical School. “Fast scratching or rubbing makes dogs aroused, while slow, firm petting calms them down.”

In studies where touch produced beneficial results, the contact was “gentle” or soothing. Davis has noticed that dogs prefer to be petted by someone with “knowing hands” – an assuring touch by those who understand dogs. “Some people pat dogs, hard, on top of the head. I don’t think that does much good,” comments Linda Tellington-Jones, creator of TTouch, a specialized therapeutic touch. “However, there is a difference when you put your hands on an animal and make the connection with care.”

Grooming or even just running our hands over our dog’s bodies to scan for physical problems can qualify as beneficial touch.

With practice, anyone can use massage to relax or reassure a dog. In a quiet, comfortable place, lead into massage with soft petting. Let your dog guide the technique. Feedback that you’re giving a good massage may include “power” tail wagging, doggy grins, drooling, leaning or sprawling against you, and flopping belly up. Massage can elicit a “glorious, incredible response,” says Ballner.

According to Tellington-Jones, TTouch goes beyond massage to augment training and improve behavior. “Massage is wonderful for dogs; it relaxes them,” says Tellington-Jones. “TTouch relaxes but also makes them alert and heightens their senses in a non-anxious way.”

TTouch is an extensive series of circular movements or gentle lifts, using the fingertips on various parts of the body. Rather than relaxing muscles, the technique is designed to activate cells and neural pathways.

In tests, says Tellington-Jones, massage was found to produce alpha brain waves, while TTouch caused both hemispheres of the brain to be activated, resulting in the activation of beta (used for logical thinking) and two additional brain waves, as well as the release of stress-reducing neurotransmitters.

Tellington-Jones has taught TTouch practitioners to help dogs alter aggressive behavior, reduce nervousness, and as a training method for competition. “We’re interested in working with animals in a way that increases their intelligence,” she says. “We allow the cells in our hands to talk to the animal’s body and remind them of their potential and function.”

The emotional benefits of petting to our dogs may be more important than the physical. “Most animals are tactile and need to be touched; they like it,” says Allen M. Schoen, DVM, author of A Kindred Spirit: How the Remarkable Bond Between Humans and Animals Can Change the Way We Live. “Touch stimulates healthy socialization. The more you touch a dog, the more easily he is socialized.”

“Dogs are a social species, and humans have developed such a degree of social dependency in them, that their need for touch is critical,” agrees Dr. McMillan, “If they are not touched, they suffer emotional pain.”

Touch may also ameliorate the angst that accompanies healthcare for many dogs. When Dr. McMillan did the research for his article, he sought information on how human contact could improve veterinary care and promote healing.

“Whether touch actually improves health beyond the elimination of stress, we don’t know,” says Dr. McMillan. “But we presume it benefits health because of the beneficial physiology. Perhaps touch blunts, eliminates, or counteracts the adverse effects of stress, and thus aids recovering and healing.”

Dr. Schoen encourages owners to visit or even stay with their dogs while they are in the hospital. Dogs left alone or not petted commonly become depressed and in serious situations may even “give up” if deprived of contact with their people.

As part of their education, veterinary students must take a surgical course and perform operations on dogs. Retired veterinarian Robert Houston recalls that in his senior year, he had to learn 14 different procedures over a period of 16 weeks. Normally students would have access to 14 dogs, one for each procedure. After discussions with his lab partner, they decided for humane reasons to limit the number of dogs on which they would operate to one.

Houston operated with as much skill as possible and followed up with good nursing care. He and his lab partner alternated visits, so that the one of them visited the dog every two hours. During this time, they talked to the dog and stroked him. “While it was sometimes heartbreaking, our dog survived every procedure,” says Dr. Houston, now retired from the Air Force Veterinary Corps. He gives a lot of credit for the dog’s survival to the caring contact they shared.

A new trend in specialty clinics is to have a place for clients to stay with their animal overnight. “It makes a big difference in their recovery,” says Dr. Schoen.

Dr. McMillan hopes to see more veterinary clinics move in this direction. He also feels it is helpful to have owners present during medical procedures. Technicians note that pets receiving chemotherapy seem to experience less discomfort and accept treatment more calmly when they’re held and stroked while the drugs are administered.

“The more human contact during any kind of illness or recovery, the better,” Dr. McMillan says.

Scientists have barely begun to look at why loving touch can positively effect healing, but Schoen believes it’s because “love is the greatest healer and touch is a great expression of love.”

The use of touch can be effective in training, too. “When I train my dogs, I use touch to guide them into position,” says Kathy Diamond Davis, who trains therapy dogs.

Touch can also be the means for expressing complex emotion.

“Touch is one of the most critical ways of connecting with all other living beings,” says Dr. Schoen. “Touch is a powerful connection that can have a negative or positive impact. It’s our responsibility to relate to our dogs from the most positive perspective possible.”

Maryjean Ballner, author of Dog Massage, writes that touch transcends every other way of communicating with our animals. Touch is not egocentric, but altruistic. When we pet our dogs, it should be from a place of integrity and with the message of unconditional love.

-Lexiann Grant is a member of the Dog Writers Association of America and an eight-time recipient of the Maxwell Medallion for excellence in dog writing. 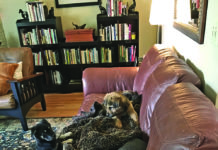 Fostering Dogs: What You Should Know 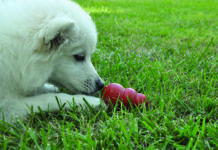 Nancy Kerns
0
Do any of you work in a veterinarian’s office or shelter? If so, what are the words that you wish you could...