It’s really a safe and simple procedure; one that most dog owners can easily learn to perform on their dogs. I have done it to my own dogs since I was a little kid. So it never ceases to amaze me when I ask my training classes how many owners clip their own dogs’ toenails and an average of only one out of eight raise their hands. That means the other seven either neglect this important procedure, or spend hundreds of dollars over a dog’s lifetime to pay someone else to do it.

Because young dogs often wear their nails down naturally by running on hard rough surfaces, we tend to overlook the importance of teaching them to accept nail trimming. Then, when the dog ages, slows down, and needs help with those nails, the procedure is seriously traumatic. Shelter workers and veterinarians tell horror stories of elderly dogs unable to walk because their nails have curled around and grown through their pads.

It is vitally important to teach your dog to accept nail trimming as part of his regular grooming routine. If you start with a puppy or a young dog, wait until she is resting quietly on the floor after a play session, gently clip off the tip end of one or two nails, feed her tasty treats and tell her what a great dog she is, she will grow up thinking that nail trimming is a wonderful thing.

There are several common mistakes that dog owners make when trimming nails. The first is clipping a nail too short (or “quicking” the dog) which causes pain and bleeding and immediately teaches the dog that nail trimming is not fun. This happened to a young puppy of mine, and it took more than a year of desensitization to convince him to accept his pedicure calmly again.

The second major mistake is trying to trim all the dog’s nails in one session. This is fine once the dog learns that nail trimming is a positive thing, but until then, physically restraining a flailing, panicking pooch while insisting that every nail is clipped only makes matters worse. Take the time to do nails one or two at a time, using treats and games to make it fun.

To help you with equipment choices, WDJ tested four different nail trimmers on four relatively willing subjects who were accustomed to having their nails “done.”

These scissors were advertised for use with small to medium breeds, and our “WDJ Approves” rating applies to small dogs only.

These scissors are made of nickel-plated steel. They appear solid and well-made and are affordably priced. They work just like a pair of scissors. But while they clipped my eight-pound Pomeranian’s nails easily, they required more force than I liked to cut through the nails of my 25-pound terrier mix.

I like the solid construction and simplicity of these scissors, but their application would be limited to cats and very small dogs. I was also disappointed that the packaging the scissors came in was a plain plastic sleeve with no instructions for use. If your dog is 15 pounds or less, you could give these a try. For anything larger than a Lhasa, keep reading.

I purchased the medium size clipper, and found it perfectly capable of cutting the nails of my 75-pound Australian cattle dog mix. While advertised as having “heavy steel blades,” the clippers did not appear as well constructed as the previously described nail scissors – in fact the plastic handles appear downright cheap; I doubt they would stand up to heavy use. The instructions on the back of the package are well-illustrated, clear, and easy to understand, and include that all-important warning: “Avoid cutting off too much at one time.” The safety stop is an interesting feature, and may inspire confidence in the nervous, first-time owner/clipper, but would just get in the way for a more experienced nail trimmer. (Fortunately, it can be removed.)

My biggest complaint about these clippers is that the blades don’t line up tightly against each other, so they tend to leave ragged edges on the clipped nail. I suggest you skip this one; there are better clippers available at better prices.

These are the old stand-by nail clippers that many owners are familiar with. The ominous “guillotine” name comes from the fact that the dog’s nail is inserted through an opening and the blade slices down to chop it off. Without a “safety stop,” the owner must control how much of the nail is inserted through the hole (not an easy task with a wiggling dog). And, as the package instructs, it’s important to slice off only a small amount at a time in order to avoid quicking the dog.

This has long been my favorite nail-trimming tool. It gives a better view of how much nail I am cutting than does the scissors-style clippers. The tool fits solidly in the hand and is easy to grasp and hold. The price is right. The snug blade fit allows for a clean cut. And, best of all, the blades are replaceable. When you start to find ragged edges on your dog’s newly trimmed nails, it’s time for a new blade.

This is the tool for the connoisseur of nail trimmers. It is routinely used in the dog-show world to achieve the nub-short nails in vogue for the show ring. It is available in electric and cordless models, and works like a charm, effortlessly grinding away unwanted nail material. Effortlessly, that is, if your dog will allow you anywhere near with the grinder turned on!

Two of my four test dogs tolerated the tool with some initial resistance that was overcome by the liberal use of liver treats. Both dogs were tense about the procedure, and it would take additional desensitization to get them as relaxed about this tool as they are with guillotine clippers. The results of the trim were beautiful – short, rounded nails – shorter than I had ever been able to trim them with the guillotine clippers.

However, my other two test dogs wanted nothing to do with the noisy, vibrating machine. They would stay close for liver bribes when the machine was turned on, but feeling the vibrations against their nails was more than either could tolerate. For these two, a serious desensitization program would have to be implemented before we could successfully grind their nails.

One last caution. Don’t count on the package instructions to help you put the Grinder together. After a good bit of struggling, I finally took it to my husband. In typical male fashion he ignored the instructions and managed to put the grinder together by pushing and prodding until the right parts were in the right places. 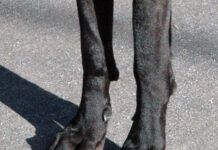 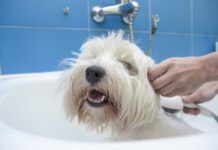