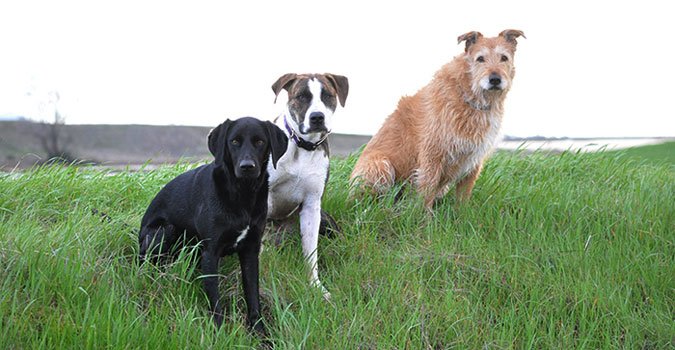 Yesterday, I had a long list of things that I needed to do and had committed to doing – things for myself, my job, my husband, a friend, and the shelter where I volunteer. The list was so long that just contemplating it made me feel tired.

Not even on my list, but in the back of my mind, was the knowledge that the dogs haven’t been out for a good long run in days and days. Nine-year-old Otto can cope with that; while he loves going out for off-leash runs, his behavior doesn’t really change if he doesn’t have that opportunity.

But Otto’s counter-point is one-year-old Woody, whose behavior gets increasingly gravity-defying with each day that goes by without a run. The carpet runners in my hall start piling up at either end, as he finds he can no longer walk through the house; he has to dash down the hall and slide into the room at either end. He starts greeting guests with airs above the ground. Wooden things (like the redwood bench on my deck) start getting chewed anew.

My son’s three-year-old dog, Cole, who is staying with me for a couple weeks while my son travels, is somewhere between my two. He can maintain good behavior when he’s not getting daily runs, but his neuroses start increasing. (Like a lot of coonhounds, he’s a sensitive soul and inconsistently demonstrates weird behaviors, such as spinning before mealtime, trembling and panting while riding in the car, hiding if anyone raises his or her voice, especially if another dog is getting reprimanded).

So when I realized that the sun was going down on a rain-free day  – and we haven’t had many of those lately – I gave up on the thought of ticking off a few more of the things on my to-do list in favor of taking the dogs out for a run in our favorite place.

This particular place will close to off-leash dogs in just a few days, and stay closed until the end of June, for the nesting season. It’s a “wildlife area” – not a “wildlife refuge,” as several of my friends have mistakenly called it – but an area that is nevertheless managed by the state fish and wildlife department for recreation and hunting.  Migratory ducks and geese nest there, as do native pheasant, quail, doves, and countless other non-game species of birds. All the so-called “game birds” are hunted there in specific seasons, but from March 1 through June, the birds get a break from predatory humans and their off-leash dogs, to lay eggs and hatch their babies. So this run was probably the last one that my dogs will have in the tall, green, open fields until next year. (They can run there again when the grass is all California summer brown, and the birds are all back in the air.)

They needed it – the chance to stretch out and race each other across the fields.

All the dogs had a good time running, but none more than Woody. He runs and ducks and swerves and does these great kangaroo bounces, seemingly for the simple joy of doing them. It looks like he’s chasing a rabbit or running a race, but mostly, while Cole and Otto are munching on the tender spring grass or sniffing the small game trails, Woody is doing these great, looping laps of the field, all by himself, running for the joy of running.

As much as Woody and the others needed a chance to race around outdoors, what I remembered once we were out there, and I was laughing so hard I nearly peed myself at Woody’s antics (and couldn’t concentrate on making sure my camera was taking proper exposures), was that I totally needed it, too.

After the past week of pressure from the rain and the constant threat of another evacuation or flooding, and helping with evacuated shelter dogs who are being housed by half a dozen of my friends, on top of my own work and family obligations, I didn’t realize how tense I was, how shallowly and tightly I have been breathing all week. As I walked outside under a wide open sky, through the deep, wet, green grass, surrounded with birdsong and geese calling each other overhead, and led by three vibrantly healthy, exuberant, responsive dogs, I felt my tiredness float away. I felt my lungs start to work again; I breathed deeply, taking in all that color and oxygen and joy.

If it hadn’t been for the dogs – for trying to get the dogs tired – I’d still be exhausted! But that walk filled me up, and I’m happily plowing through my to-do list again, even as they sleep.

For the millionth time, thank you, dogs!