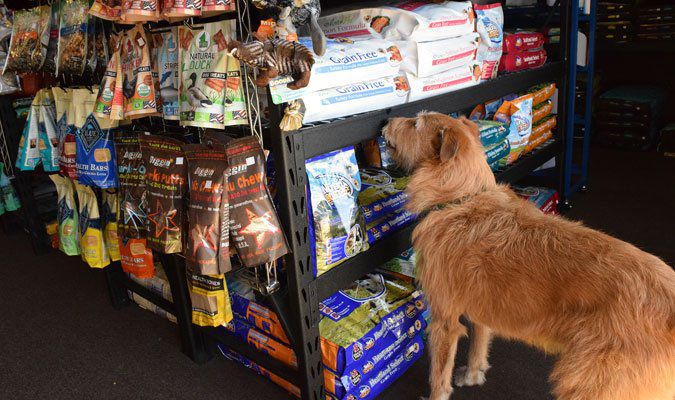 I was in a chain pet supply store the other day, looking for a higher-quality food for some foster dogs from my local shelter who are a little chubby. For this reason, I was looking for a product that was not too high in fat.

I was a bit surprised to realize that grain-free foods have sort of taken over the shelves in the section of the store where the higher-quality foods are stocked. Many of the companies whose products appear in the “natural/holistic” or “premium” section seem to offer only grain-free foods. I had to go through several aisles before I found a product from a company that I like offering a food that contained grain and had a lower fat content.

For example, one whole aisle was devoted to Merrick, and only Merrick’s grain-free foods were being sold. Most of these foods contain a minimum of 38 percent protein and 17 percent fat. At home, I saw that Merrick still offers a “Classic” line of foods that contain grains, and these contain slightly less fat (15 percent) but also less protein (25 percent in the case of the lamb variety, and 30 percent for the beef and chicken varieties).

The marketing of foods has also gotten very focused on grains, whether pro or con. Merrick highlights the Classic line as containing “ancient grains like quinoa.” Quinoa is a favored ingredient in dog food advertising, perhaps because no one has yet launched a campaign against it. Never mind that quinoa appears fairly low down on the ingredients lists of these foods. For example, in Merrick’s Chicken variety, it appears 10th on the ingredients list, well below peas (3rd), brown rice (5th), and barley (6th).

Some dogs do better on grain-free foods than on a diet that contains grains, but this isn’t true of all dogs. I wouldn’t give grain-free foods a blanket recommendation for all dogs; I don’t think they are a superior diet, except for dogs that have a specific problem digesting grains. Other dogs might have difficulty digesting the carbohydrate sources that are in the grain-free foods!

How about you? Are you feeding grain-free? If so, why? Have you seen any changes in your dog’s health or digestion since using these diets?

Note: We published a great article on the issue of grain-free foods in 2010. Check it out!