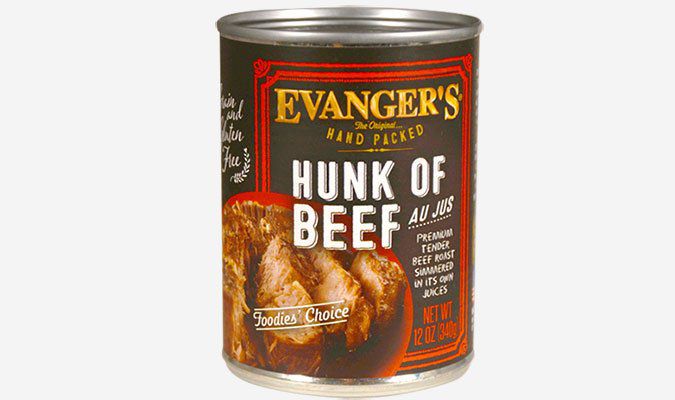 This article was originally published in early Feb. 2017. Updates are in bold below.

On February 3, 2017, the FDA announced that Evanger’s Dog & Cat Food had recalled five lots of its canned Hunk of Beef dog food, for a “potential contaminant,” pentobarbital. One dog has died after eating the food, and three others were sickened. All four dogs belong to the same family, and ate food from the same can of food. [Note that various media outlets, including the original television broadcast with the owner on camera, have reported that the family brought four dogs to the veterinarian and one died. The FDA has been reporting that the family brought FIVE dogs to the vet and one died.] The dog that died was necropsied, and some food from the open can of food was tested. The results: both the dead dog’s stomach contents and the open can contained pentobarbital, a drug commonly used to euthanize animals.

Given that the Hunk of Beef food – an incomplete diet meant for supplemental or intermittent feeding – contains nothing but beef chunks, Evanger’s is blaming its supplier of the beef used in the batch of contaminated food. The company has announced a voluntary recall of that batch of food, as well as four other batches of food produced the same week with beef from the same supplier. [UPDATE: Evanger’s also makes a food called “Against the Grain,” which is not overtly labeled as an Evanger’s product. The “Pulled Beef With Gravy” variety of Against the Grain has since been recalled by Evanger’s.]

The company says it has terminated its relationship with the meat supplier for both products, despite a 40-year history of doing business together.

No other reports of dogs being sickened by this or other Evanger’s products have emerged.

But this is a weird tale, and I suspect it’s going to take a long time for all the details to come out – if they ever do.

Weird thing #1: The owner of the dead dog has exchanged only one brief communication with Evanger’s.

The dog that died and the others who were sickened belonged to a single owner in Washington State. They were all Pugs, who were fed a single can of Evanger’s Hunk of Beef food as a “topper” on their usual dry food on New Year’s Eve (Saturday, December 31, 2016), as a treat. The owner of the dogs claims that within 15 minutes of the meal, the dogs began acting strangely, acting dizzy or “drunk,” and falling over. She took all the dogs to an emergency veterinarian, where all of them were treated, but one dog died.

We have not yet contacted the dog’s owner to verify the exact chain of events, but it would seem that the owner published a post on Instagram some time on Sunday, January 1, blaming the Evanger’s food for her dog’s death.

It would appear that on Monday, the owner posted an account of her story on the crowd-funding site YouCaring, asking for help with her dog’s vet bills. Evanger’s, still trying to contact the owner, paid the full amount that the owner was asking for on the YouCaring post, and asked the owner to please contact them.

A local television news station, KATU, interviewed the distraught owner discussing the event and picking up one of the surviving dogs from the veterinarian on Monday morning. This report was broadcast on Monday evening, January 2.

To date, Evanger’s says it has had only one direct communication with the dogs’ owner, a single short email.

The YouCaring page has been taken down. The dog owner’s Instagram page is now private.

Weird thing #2: Meat supplier is as yet unidentified.

Neither the FDA nor Evanger’s has revealed the name of the company that supplied the meat in the recalled lots of food.

In the case of most food-based recalls, whether the product is meant for consumption by humans or pets, if a specific ingredient in the food is suspect, the ingredient is generally traced to its source. What if the adulterated ingredient was used in other food products, elsewhere?

We contacted the FDA and asked why the meat supplier involved in this case has not been named. FDA spokesperson Anne Norris responded: “FDA’s investigation is ongoing, and the agency is committed to providing additional information as it becomes available,” and promised that she would be in touch when she is able to provide us with additional information.”

UPDATE: On February 17, the FDA released the following statement:

In its recent press release announcing a limited product recall, Evanger’s Dog & Cat Food Company, Inc. stated that the beef for its Hunk of Beef product came from a “USDA approved” supplier. However, the FDA reviewed a bill of lading from Evanger’s supplier of “Inedible Hand Deboned Beef – For Pet Food Use Only. Not Fit For Human Consumption” and determined that the supplier’s facility does not have a grant of inspection from the United States Department of Agriculture’s Food Safety and Inspection Service. The meat products from this supplier do not bear the USDA inspection mark and would not be considered human grade. USDA-FSIS regulates slaughter of animals for human consumption only. Testing by USDA-FSIS of Evanger’s Hunk of Beef confirmed that the meat used in the product was bovine (beef).

The investigation by the FDA is ongoing and includes examination of the suppliers of beef to Evanger’s and Against the Grain to determine a possible cause for the presence of pentobarbital. The FDA is also coordinating with the USDA to address any possible areas of shared jurisdiction at the suppliers.

A site I would describe as a conspiracy theory pet-food blog seems to have been in contact with the dog owner, and has been publishing highly inflammatory posts about the case. The site also published the necropsy report for the deceased dog, thanking the dog owner for supplying the report and allowing her to publish it.

Further, the blogger published an “updated” (yet undated) post claiming to have received information from a fellow blogger that she “received confirmation from an [unnamed] FDA spokesperson” that FDA testing carried out in the agency’s Veterinary Laboratory Investigation Response Network (Vet-LIRN) detected pentobarbital in “closed cans of food collected from the dog’s owner and from the retail location where the food had been purchased.” There has not yet been what we would consider credible evidence that this is true, nor has the FDA confirmed this.

UPDATE: In the press release on February 17, the FDA stated for the first time publicly that “unopened cans of the product from the pet owner and retailer that sold the products (from the same production lot), were tested by FDA’s lab. All of the samples tested positive for pentobarbital.” We have to ask: Why, if this information had been released to a pet food blogger some time ago, could this not have been confirmed and made public sooner?

Most important weird thing (#4): The presence of pentobarbital in a pet food.

The conspiracy theory bloggers and the pet owners who believe them are convinced, despite any credible evidence to the contrary, that euthanized dogs and cats are used as ingredients in pet food, and that any pentobarbital found in pet food proves this.

Pentobarbital is, in fact, commonly used as a euthanasia agent in pets and horses; it is also sometimes used to euthanize livestock – not on commercial food animal production facilities, but on family farms. I, myself, had a veterinarian euthanize my family milk cow with pentobarbital when it was “her time.”

However, no animal euthanized with pentobarbital should wind up in any facility that makes any product that will end up in pet food. There are Federal food safety laws that do not permit dead pets to be rendered in facilities that produce fats, meat meals, or bone meals that will be sold to pet food makers.

Pentobarbital has been detected in dry pet food in the past. The FDA’s Center for Veterinary Medicine began looking into the issue in 1998, and conducted tests on pet foods that year and again in 2000. The FDA issued a “white paper” about its findings in 2002, concluding that euthanized cows and horses that had (illegally) found their way into pet food, but that the levels of pentobarbital found in some pet foods were so low, that they would not pose a risk to the health of dogs and cats that ate those foods. The FDA also stated that every food in which pentobarbital was detected was subjected to tests looking for dog or cat DNA, but none was found.

Off the record, old-timers in the pet food industry will admit that more than 20 years ago, euthanized pets probably were occasionally used by unscrupulous pet food producers as a source of “meat and bone meal.” However, every industry source we have interviewed claims that this could not happen with today’s food safety laws and oversight. Any company that risked such a thing would be setting themselves up for swift financial suicide.

Cows or other food animals (pigs, sheep, chickens, etc.) that die before they can be killed at a slaughtering facility are, by Federal law, not allowed to enter the slaughtering facility, but must be diverted to a rendering plant that makes ingredients for non-food products, such as fertilizer, biodiesel fuel, soap, and candles.

If an animal that was euthanized with pentobarbital was slaughtered and its meat sold for pet food, it would be a serious violation of Federal food safety laws.

Pet food companies are technically liable for ill effects caused to an animal by their products, but in point of actual fact, any pet food company whose product harmed an animal will be trying to determine if someone else was at fault. Start the clock on the filing of lawsuits, counter-suits, and finger-pointing.

When a company’s food is actually made by a contract manufacturer, it’s likely that the company whose name is on the label will try to blame the co-packer, saying, “We did not authorize that ingredient/source to be used in our food…it was used without our knowledge.” And the co-packer will shoot back, “The company absolutely knows what we put in their food; here are the ‘run sheets’ that they signed off on, proving they know what was in the food…” They typically sue each other, and then settle out of court, with the case sealed so that the public never learns who was truly at fault, the company whose name is on the label, or the co-packer.

In this case, the food was made by the company whose name is on the label. Evanger’s makes its own food in its own plant – and the food (according to its label) contains nothing but beef. What could they do but blame their meat supplier?

We’ll continue reporting on this story as it develops.