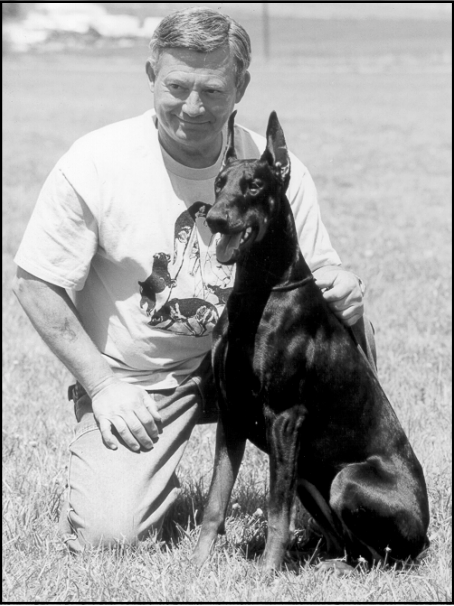 The name Ray Carlisle is synonymous with Doberman Pinschers. A breeder and exhibitor for 40 years, a show judge for the last 20 years, and a former president of the Doberman Pinscher Club of America, the United Doberman Club, and the American Working Dog Federation, the New York resident travels the world on behalf of his favorite breed. “I vaccinated my dogs for many years,” Carlisle says, “but they all had chronic health problems, and many died of cardiomyopathy at age five or six.”

As he looked for ways to improve his line of dogs, Carlisle met breeders of Dobermans, Great Danes, and other breeds whose dogs lived well into their teens. “Some of them hadn’t used vaccines for years,” he says, “and they used remedies I had never heard of. Their dogs were so healthy and in such excellent condition, I slowly started to reduce my vaccinations and improve my dogs’ diet.” Today they eat large amounts of raw meat supplemented by PHD dry food and occasional raw green tripe.

Since 1978, Carlisle has used what he calls “field vaccinations.” In each new litter, he gives one puppy a combination vaccine and places it back in the whelping box. Vaccinated puppies do “shed” the virus in the days after vaccination, and close contact with vaccinated littermates can stimulate an immune response in the unvaccinated pups. Carlisle has faith in this approach; whenever he has tested their titers, all of the littermates, vaccinated and unvaccinated, have shown identical results.

“It’s an interesting coincidence,” he adds, “but in the last 25 years, the only puppies that developed health problems were the vaccinated ones. I save these puppies for people who believe in vaccination. One went to an obedience competitor whose brother is a veterinarian. Following his advice, she had the puppy fully vaccinated, and it died of cancer at age two.”

For three generations, Carlisle has taken puppies from unvaccinated parents and exposed them to everything imaginable during their first eight weeks. “This is the exact opposite of what most breeders do,” he says, “but I’m convinced that exposing puppies to the world protects them, while keeping them in isolation makes them weaker.” In the past 25 years, Carlisle has bred more than 400 unvaccinated puppies, and until last summer, none of them had ever contracted parvovirus, distemper, coronavirus, or other serious contagious illness.

Four years ago, Carlisle kept a puppy who became his favorite companion. UDC Champion Cara’s April Fool, Schutzhund I, was born to a mother who had received only one vaccination and a father who was never vaccinated. “April traveled all over the world with me,” he says, “and she was never sick a day in her life.”

In August, she accompanied Carlisle to his Spring Valley office, then to a large dog park in New York City, and to an obedience class. “That’s where we were when I learned my mother had died, and I spent the rest of the day rushing home, packing, and taking the first flight out.”

April stayed home with Carlisle’s wife. The next morning, she wasn’t hungry, and later that day, she had a small amount of diarrhea. By the next morning, April was severely ill with what her veterinarian called the heaviest case of parvo he had ever treated, and she died the following day.

“I was shocked,” says Carlisle. “She was only three years old, had never been bred, and had her whole life in front of her. She was also one of the strongest, healthiest dogs I’ve ever known. It was unbelievable. This happened almost a year ago and it still hurts.”

Despite this unfortunate incident, however, Carlisle has not changed his aversion to using vaccines. “My attitude about vaccinations hasn’t changed. In a breed that has been steadily declining, my dogs live almost twice as long as they used to, and they’re in excellent condition. Cardiomyopathy, which used to be a major problem for my dogs, has disappeared. There’s absolutely no question in my mind that the benefits of not vaccinating far outweigh the risks.”