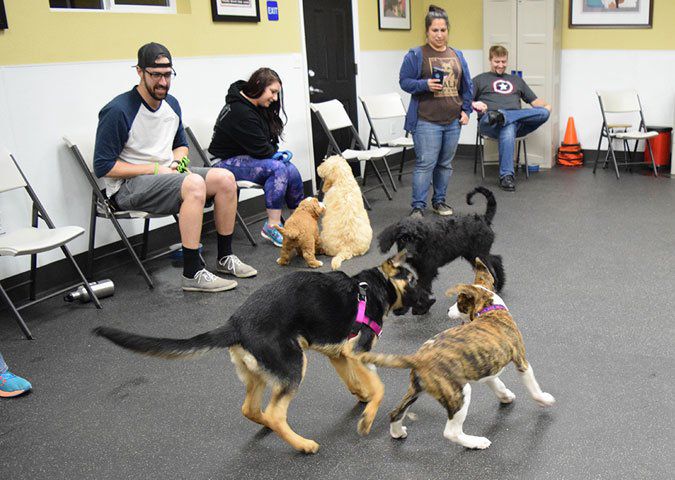 I’m a big fan of “puppy socials” – a classroom-type setting to which people bring their puppies for socializing with pups of a similar age. It’s a powerful opportunity for the puppies, especially the ones who are being raised with no other dog at home to learn basic canine social skills from – or the ones who DO share their homes another dog, but the dog is super grumpy about puppies.

I first learned about puppy socials from my good friend Sandi Thompson, owner of the famed Bravo!Pup (dog and puppy training) in Berkeley, California (bravopup.com). Sandi was lead trainer for Dr. Ian Dunbar’s pioneering business, Sirius Dog and Puppy Training, for many years, before striking out on her own. Due to the value to the puppies and the popularity among the puppy owners of the “Go play!” breaks within her puppy training classes, Sandi decided to offer the participants in her classes a separate weekly session of “just” playing and socializing. During the sessions, she helps the owners identify and reinforce healthy puppy play, and teaches them how to gently interrupt potentially problematic puppy play. She also prompts the owners to occasionally interject moments of practicing training exercises that they learned in the puppy classes, and then powerfully rewarding the puppies for their compliance in such an off-the-charts distracting environment with the best possible reward: “Go play!”

Ten years ago, I moved from the San Francisco Bay Area, where I was surrounded by wonderful and highly educated dog trainers (including Sandi), to the relative dog-training desert three hours north. But thank dog, there was ONE wonderful and highly educated dog trainer close to me: Sarah Richardson, of The Canine Connection in Chico, California (TheCanineConnection.com). That’s who I sought out for modeling for WDJ articles when I moved here in 2006, and whose training classes I attended with Otto when I adopted him as an adolescent shelter dog in June 2008. And whose puppy training class and puppy socials I am attending with my new pup Woody!

Like Sandi, Sarah offers the owners in her puppy training classes a separate session each week that is devoted to puppy socializing and play only, separated from the training classes – although she guides the puppy owners in reinforcing their puppies’ healthy social interactions and gently but proactively stopping them from practicing any sort of bullying or defensively aggressive ones. The super shy or anxious puppies are given opportunities to come out from under their owners’ chairs and explore while the more assertive and/or brave pups are reinforced for restrained on-leash behavior on the sidelines. And then the strongly social pups are given a chance to run, play, and practice introducing themselves to other puppies in manners both weird and wonderful. They learn what physical body language prompts potential playmates to engage in play and which body language triggers another puppy to take defensive action upon their own person – in other words, it’s a safe place for the little pups to learn kindergarten social skills in a group that is safe from “big kids” or grumpy grownups.

That’s not to say it doesn’t take a certain amount of management to make sure it’s safe for everyone. My friend Leonora, who fostered a litter of six TINY puppies for my local shelter recently, ended up adopting the tiniest one in the litter, Samson – all two pounds of him. I adopted the largest puppy in the litter that I fostered over the same time period, Woody, and we are commuting together to bring both pups to Sarah’s puppy training classes and puppy socials. The puppies get along famously, but they can’t yet be permitted to play together unfettered; one playful gesture of Woody’s can mean a concussion or broken leg for Samson. In Sarah’s puppy social sessions, there may be 20 or more pups of various sizes and play styles, and Samson’s stature and social needs are considered alongside of the big, exuberant puppies. Unfortunately, because all of the puppies present in our first session were so large, Samson did some of his socializing from behind a protective exercise pen, and some on leash, so that Leonora could swoop him to safety, if need be. As he grows a bit, and the pups get more accustomed to the play sessions, we hope he can “Go play!” in a more unfettered fashion.

A side note: I think the people who have big, rowdy puppies are the most likely to avail themselves of these social sessions, because they can clearly see their developing dogs need to play. But this is one of the many reasons that so many small dogs grow up with poor social skills: because their exercise needs can be met readily through less-strenuous outlets, and their owners don’t recognize that ALL dogs need time with other dogs to practice their own “language.” My friend wants Samson to be comfortable with all the dogs he meets, and is taking pains – at the highest level of exposure she can risk – to make sure he gets social time with dogs and puppies of all sizes. Smart!

At our first session, Sarah asked the puppy owner participants to described their puppies in one word, and I used “mellow” to describe Woody. That is ordinarily true, but I’m not sure anyone believed me after his first play session. There was one particularly exuberant, large German Shepherd puppy in the session who seemed to inspire Woody to new heights of both activity and over-arousal, so I had to interrupt my puppy a couple of times and bring him back to the sidelines for a highly rewarding calm-down session. I have witnessed Woody’s genetic predisposition for play-biting with a particularly extended hold on the “bite” part, and I want to nip that behavior in the bud to the extent possible. He’s got a lovely soft mouth when playing with humans, and learned to bite gently when playing with my former foster, Maebe – she would dump him unceremoniously on the ground and quit the game if he tried the bite-and-hold with her – but since Otto won’t brook ANY contact with the puppy, he’s losing practice time at this important skill, and the puppy social is a great time to regain it. I don’t want him to get frustrated, so instead of being put on some sort of punitive time-out when he gets over-the-top with play, or bites another puppy and won’t let go after a second or two, I’ll jump in with a super high-value treat and lure him off to the sidelines to practice some sits and downs for some yummy treats and some low-intensity down/tug with his favorite toy.