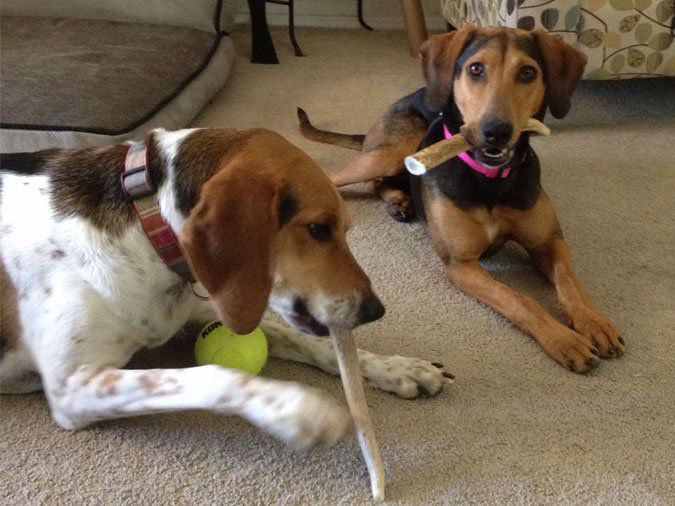 For over three months, I had possession of a year-old American Black and Tan Coonhound or coonhound-mix whom I called Maebe. I absolutely loved that dog, and cried when I dropped her off for transport to her new home. AND I’m thrilled and tearful – in a good way – that she found a great new home. That’s the bittersweet experience of fostering.

As a frequent foster person for my local shelter, I had originally pulled her as a prospect for my sister-in-law and her six-year-old daughter. She is one of the sweetest, most affectionate dogs I’ve ever met, loves cuddling on the couch or petting anytime, and is super inquisitive about anything humans are doing. But within days of bringing her home, I could see that she had far too much energy for my sister-in-law’s home and schedule. She needs regular running, or she finds creative/destructive ways to amuse herself in a house. I knew my sister-in-law, a working mom without a partner (her husband, my brother, passed away last year), didn’t have time in her schedule to add in hour-long walks.

Even though I had pulled her with a specific home in mind, once I realized Maebe wouldn’t work out for that home, I couldn’t take her back to my shelter. Once I’ve pulled a dog and have gotten interested in him or her, I just can’t take them back to the loud, concrete row of barking dogs. Instead, I figured I’d advance her training and life experience, and find her another home, while keeping an eye peeled for a different dog for my sister-in-law and niece.

I started work on her house manners, sit, down, wait for the food bowl, not jumping up, and especially, not darting out the door. She was a champion door-darter. She flew out of the car from the backseat over my shoulder once, before I started using a harness and seat belt, even if we were just driving the two blocks from my home to my office. We worked on leash manners, and a recall off-leash. She learned everything really fast. We also worked to reduce her mild separation anxiety, with lots of short, drama-free exits and entrances.

She caused a certain amount of trouble in my home and at my office. She dug up some garden beds. At first, she wailed when left alone for any length of time, even just the few minutes it took me to walk to the post office on the next block and back. She chewed through my Macbook power cord. She ate an entire cake that my sister baked for me one day, a cube of butter another day; she is an experienced and crafty counter-surfer. But she is also the most playful mischievous, likable dog! And she played and played with the litter of puppies I was fostering, and then the one in the litter I decided to keep. She served as a full-time companion and playmate to the puppy, Woody, keeping him from having to get reprimanded sternly by my older dogs, Otto and Tito, every two minutes. She and Woody slept together, switched bowls back and forth when eating meals, chewed opposite ends of the same toys, and romped together all day long.

I marketed her initially to my son’s friends and teammates. He plays a sport that involves a lot of running (Ultimate, better but less accurately known as Ultimate Frisbee), and almost all of his friends are athletes. I’ve found dogs for several of his friends, teammates, and work associates before – three dogs in his office are my former fosters! – but nobody was currently in the market for a canine running partner.

So I reached out to the American Black and Tan Coonhound Rescue, an organization I’ve talked about before. It’s one of the best breed rescues I’ve had the pleasure of working with. They have a very large and dedicated group of volunteers who foster and transport hounds from areas where they are very much in danger of being euthanized in shelters, and finding them homes with people who can handle and appreciate their unique characteristics. Like many breed rescues, they often take on hounds other than the one the group is named after, and even hound-mixes. And they take on dogs who have health and/or behavioral challenges, and find just the right type and amount of help they need to be appropriately placed.

Within a week or two, the rescue had passed along a couple of inquiries about Maebe to me. I corresponded with both potential adopters, and one lost interest fairly quickly, based on the amount of exercise I suggested that Maebe needed to behave herself. But the other potential adopter wasn’t daunted by that OR the news about Maebe’s other various mischief (door-darting, separation anxiety, and all); she had adopted another coonhound from ABTCR a few years ago, and was well acquainted with coonhound ways. The only catch: she lives in Arizona, almost a thousand miles away.

And then, just a week or so later, the ABTCR came through with transportation, largely provided by volunteers from another amazing organization: Pilots n Paws, a group of aircraft owners and enthusiasts who volunteer to help move dogs from places where they are in danger to new homes or rescue groups, especially across distances that are too far for a simple bucket-brigade of volunteer drivers.

I drove Maebe to the ABTCR’s Western region coordinator’s base, a dog daycare in Jackson, California, about two hours away. I wept and sniffled during the whole drive, seeing Maebe’s goofy countenance in my rear-view mirror the whole way. It kills me every time I take one of my foster dogs to a new home, even when I’m certain it’s going to work out perfectly. THEY don’t know where they/we are going. When I hand the leash over to someone they don’t know, they don’t know they won’t see me again, or where they are going to sleep that night. They just know they are in the wind again. Those facts just stab me in the heart. Just as the sight of Maebe’s confused expression did when I last saw her, among a group of dogs at the daycare. “Where are you going? Why are you leaving me here?” I could barely say goodbye to the rescue coordinator, and sobbed once back in my car.

But a day later, I got to see pictures of inquisitive Maebe in a small airplane, flying over California, and being greeted at a small airport a thousand miles away by her new owner. And within another day, pictures of her chewing toys with her new coonhound “brother” in her new home, and snuggling on the couch with her new owner. And I’ve been getting reports from the owner, about how funny and mischievous she is, and how Maebe has already become the exception to the adopter’s mother’s lifelong rules about “no dogs on the couch,” and “no big dogs on laps.” And those things cause an outbreak of happy tears!

I’m completely immersed in puppy-training Woody now, and have a new litter of nine foster puppies to care for, for at least a few more weeks. So I don’t think I will be fostering any adult or young-adult dogs for a while.  It’s time-consuming and draining… but eventually, I forget about all that, and with the help of a continuing flow of happy pictures from my former foster dogs’ new owners, I just remember the best news: another dog saved from the shelter, and beloved in a home. And so I bring home another one to foster.