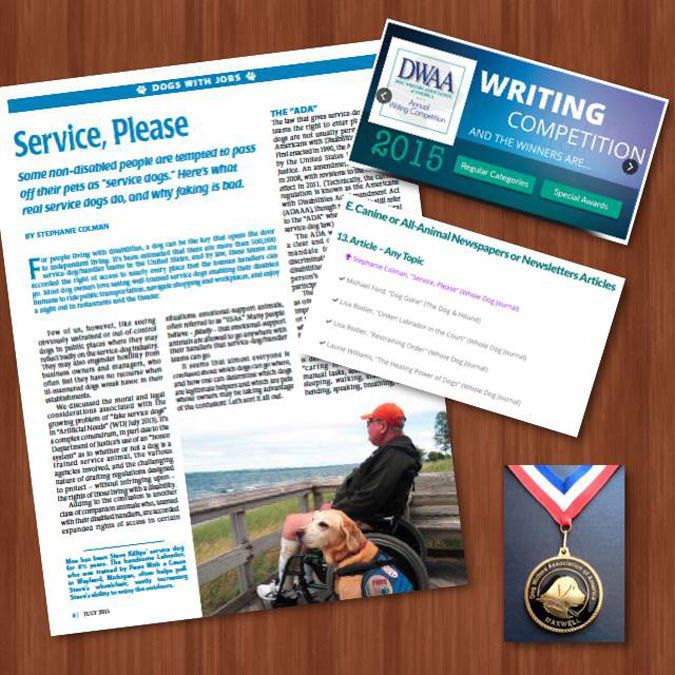 I want to congratulate WDJ’s long-time contributor, dog trainer/writer Stephanie Colman, for winning a Maxwell award from the Dog Writers Association of America (DWAA), for her article, “Service, Please,” which ran in WDJ’s July 2015 issue. The award is named in honor of the late Maxwell Riddle, who co-founded the DWAA. The awards were announced on February 14, at the Pennsylvania hotel in New York City at the DWAA’s annualawards banquet, held prior to the Westminster Kennel Club Dog Show.

Of course I’m biased, since I edited the article, but I thought it better explained the differences between service dogs, emotional support animals, and therapy dogs – including their capabilities and training – than any article I’ve seen before or since. It also discussed the differences between their legal access to public places, why there is so much confusion about what dogs can go where – and why it’s so bad for people to take advantage of that confusion and pass off one type of dog as the other.

Apparently the judges of the DWAA’s annual competition agreed, because it was awarded the top prize in the “Canine Newsletter Article or Column” category.

I’d also like to congratulate two other WDJ contributors who were named as finalists in the same category. Trainer/writer Lisa Rodier had two WDJ articles named as finalists: “Order! Labrador in the Court!”, about a dog who provides comfort to victims in a courtroom, and “Restraining Order,” her report on canine car restraints. And trainer/writer Laurie Williams’ article, “The Healing Power of Dogs,” about how dogs and the dog community have literally saved her life, was another finalist.

What a dilemma! The work of three of our very strong writers battling it out in the same contest! My appreciation and thanks to all of them.

Want to judge for yourself? Click to read the articles mentioned above:

The Healing Power of Dogs