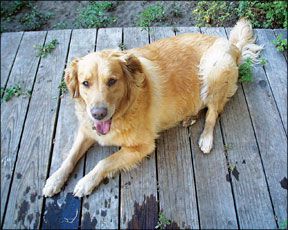 A surgical procedure used on humans to remove brain tumors that cause Cushing’s disease is now becoming available to dogs, thanks to collaboration between a human neurosurgeon, a veterinary endocrinologist, and a veterinary surgeon in the Los Angeles area.

Cushing’s disease (hyperadrenocorticism, or HAC) is an adrenal disorder  common in middle-aged and older dogs, affecting an estimated 100,000 dogs per year in the U.S. It occurs when the body produces too much cortisol, causing increased appetite and thirst, skin problems, and muscle weakness. Cushing’s can also predispose dogs to other conditions such as diabetes, pancreatitis, and infections.

There are two types of Cushing’s disease: adrenal and pituitary. The pituitary form is the most common, accounting for about 85 percent of cases. Pituitary-dependent Cushing’s is caused by a small, usually benign tumor of the pituitary gland, which leads to overproduction of the hormone ACTH, which in turn triggers the adrenal glands to overproduce cortisol.

Because these tumors have been considered too difficult to remove, pituitary Cushing’s is managed with medications that suppress the production of cortisol. This treatment can relieve symptoms, but cannot cure the disease, and the treatment requires careful monitoring to ensure that cortisol levels don’t get too low. The average life expectancy for dogs with pituitary-dependent HAC is about 30 months, with younger dogs living longer (4 years or more). Many dogs ultimately die or are euthanized due to complications related to Cushing’s disease such as neurological problems, pulmonary thromboembolism, diabetes mellitus, or infection.

Human research into a new type of surgical imaging device is being done at Cedars-Sinai Medical Center in Los Angeles. Recently, veterinary endocrinologist Dr. David Bruyette (DVM, DACVIM) and veterinary surgeon Dr. Tina Owen (DVM, DACVS) from VCA West Los Angeles Animal Hospital contacted the neurosurgeon who had been studying the use of a scope (called a VITOM) and asked if he would investigate whether the device could be used to perform pituitary surgery in dogs. After looking into it, the neurosurgeon recognized that this device would be ideal for dogs, and agreed to show Dr. Owen how to perform neurosurgery to remove pituitary tumors.

The surgery is done by creating a tiny hole in the back of the mouth in order to enter the skull at the base of the brain and remove the tumor. The VITOM, also called an exoscope, displays the area on a large, high-definition monitor, magnified up to 12 times its actual size. The tool makes the procedure easier and safer, but it still requires considerable skill to be able to do such intricate surgery.

I spoke with Dr. Bruyette about the results so far. Dr. Owen has performed the procedure on 15 dogs and two cats. One dog died during the surgery, and two others died after treatment for unrelated reasons; the rest are doing well, with two dogs now remaining symptom-free over a year following surgery. Dr. Bruyette anticipates an intra-operative mortality rate of 2 to 5 percent, and an 85 percent success rate with full remission of symptoms, based on results seen in the Netherlands, where this type of surgery has been performed for several years.

Most dogs remain hospitalized for five to seven days following surgery. Because the pituitary gland controls the sleep/wake cycle, some dogs remain “sleepy” for longer than that. Dogs who live in the area can return home even if still sleepy, but those from outside the area might have to remain hospitalized for up to an additional week. The clinic can work with clients from out of the area, even helping to fly their pets back when ready. Cost of treatment is currently estimated to be $8,000 to $10,000, which should decrease over time.

Currently, Dr. Owen has performed surgery only on dogs with “macrotumors” – those larger than 1 cm. Most pituitary tumors (90 percent) are “microtumors,” too small to be seen by the naked eye. Eventually, they hope to treat tumors of any size. When the tumor can be visualized well, it is sometimes possible to remove the tumor and leave the pituitary gland.

If the tumor cannot be visualized, or cannot be separated from the pituitary gland, the whole gland is removed (“transsphenoidal hypophysectomy”). Veterinary surgeons in the Netherlands have focused on this type of surgery. When the pituitary gland is removed, dogs must be supplemented with thyroid hormone and prednisone to provide cortisol that the body can no longer produce on its own.

Dr. Owen has trained veterinary surgeons at the VCA facility in Boston. She and Dr. Bruyette plan to offer a course on the East Coast later this year to teach other veterinarians to do the procedure. Dr. Bruyette estimates that eventually 5 to 10 specialty facilities in the U.S. will offer this treatment.

Dr. Bruyette also says, however, that ultimately another solution may become available. The doctors hope to do clinical trials on a substance that shrinks pituitary tumors in the laboratory. This oral medication is currently being tested on two dogs, but it’s too soon to know how well it’s working. The researchers are looking for other dogs to participate in clinical trials. Dogs must have a large tumor verified by MRI. Subsequent MRIs will be done at two and three months after starting treatment. If interested, email David.Bruyette@vcahospitals.com.