Last month, in “Bravecto, Nexgard, or Other: Which Oral Flea Control Should You Use?” we described the five oral medications that veterinarians may prescribe to stop or prevent a dog’s flea infestation. This month, we’ll describe the four oral medications that kill fleas on dogs and are available to owners as over-the-counter (OTC) products – no prescription necessary.

As with last month’s installment in this mini-series on flea-control options, the descriptions of these products should not be taken as a recommendation or endorsement. (For more about this, see “Panacea or Poison?” in this issue.)

These products are already purchased by dog owners by the millions. Our intent in describing them by chemical class is to inform owners how they work, and what dogs they are indicated for and, more importantly, contraindicated for. Contraindications are conditions under which something should never be used; in our experience, owners and veterinarians alike are often completely unaware that these ubiquitous medications shouldn’t be given to certain dogs.

This way, if your veterinarian recommends their use, or you somehow run across them, you’ll know what they are and whether or not they’re right for your dog. As you can see from the comments already generated below, these products incite real passion–for and, especially, against. Our purpose is to keep you informed so you can form better judgments…so please don’t assume Whole Dog Journal recommends these products just because we’re running this piece. We simply want to serve readers by telling you what’s out there.

For example, the minimum dose of Capstar is 0.45 mg per pound of the dog’s body weight. A dog who weighs six pounds would need only 2.7 mg of nitenpyram. The smallest tablet of Capstar delivers 11.4 mg of nitenpyram. You could give the dog a quarter of a tablet (2.8 mg) with equal benefit and less risk.

The oral flea-killing products that have been approved for OTC sale in the United States are in a class of chemicals called neonicotinoids.

Insects and mammals alike have nicotinic acetylcholine receptors (nAChRs) in the cells in their central nervous systems (mammals also contain these receptors in their peripheral nervous systems). Neonicotinoids bind to these receptors, overstimulating them to the point that they cause paralysis and death. The chemicals bind more strongly to insect neuron receptors than mammal neuron receptors, making them more toxic to insects than mammals. Neonicotinoids are widely used in agriculture to control insects.

Three of the four OTC oral flea-killing products on the market contain nitenpyram, a neonicotinoid chemical that gets rapidly absorbed into the dog’s bloodstream from his gastrointestinal tract, and clears rapidly, too. On average, the peak blood concentration is reached in one hour (range: 15 to 90 minutes) after administration, and the elimination half-life is about three hours. These products work fast, but only for about 24 hours; more than 90 percent of the nitenpyram is eliminated in the urine within one day in dogs.

Because they are so fast-acting and have such a short span of activity in the dog’s body, these medications are commonly used when a dog who is heavily flea-infested needs to be cleared of fleas fast – perhaps so he could be transported or kenneled without fear of introducing fleas into a previously flea-free environment. These products are also a good choice to eliminate fleas quickly, without leaving a pesticide on or in the dog’s body for weeks to come.

The fourth product contains imidacloprid, one of the most heavily used agricultural insecticides in the world. Imidacloprid has been used in the “spot on” topical flea-killing product Advantage since 1996. Imidacloprid is considered to be “low” in toxicity via dermal (skin) exposure, but moderately toxic when ingested, which makes its introduction in an oral product counter-intuitive. It, too, has a short half-life (2.2 hours) and reaches its peak blood concentration quickly – 1.3 hours.

The active ingredient in all three of these products is nitenpyram; it’s included in each of the products in the same amount, so we will discuss all three together.

Because it’s so fast-acting, shelters and rescue groups have long used Capstar when they received an animal who was so heavily infested with fleas that handling, kenneling, or transporting the animal puts other animals at risk of infestation.

The frequency of serious signs, including neurologic signs and death, was greater in animals under two pounds of body weight, less than eight weeks of age, and/or reported to be in poor body condition. In some instances, birth defects and fetal/neonatal loss were reported after treatment of pregnant and/or lactating animals.

These products are said to be safe when used concurrently with other products, including heartworm preventatives, corticosteroids, antibiotics, vaccines, deworming medications, and other flea products.

Bayer Healthcare spells the name of this product with a small a. The product represents a very new application of imidacloprid – to our knowledge, the first oral use of imidacloprid as an insecticide for animals. The FDA granted Bayer a three-year period of marketing exclusivity from the date of its approval (in 2015).

Advantus does not contain any animal proteins, making it suitable for dogs with animal-protein food allergies.

Adverse reactions to advantus that may occur in dogs include vomiting, decreased appetite, decreased energy, soft stools, and difficulty walking.

Advantus is said to be safe when used concurrently with other products, including heartworm preventatives, corticosteroids, antibiotics, vaccines, and deworming medications.

A relatively small number of dogs and puppies are used in pre-approval studies to determine a product’s safety. For this reason, we’ve never encouraged dog owners to rush to try newly approved products; dogs owned by early adopters, in essence, become the next generation of test dogs. For this reason, and because this is the first drug to use imidacloprid in this way, we’d recommend holding off on buying or using this product until more is known about its safety.

Nancy Kerns is the editor of WDJ. 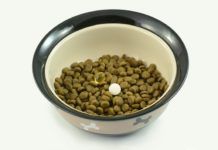 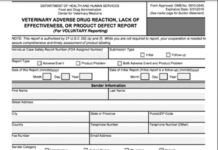 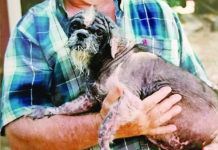