Home Blog Have You Made Arrangements for Your Dogs (In Case Something Happens to...
Print
Email
Facebook
Twitter 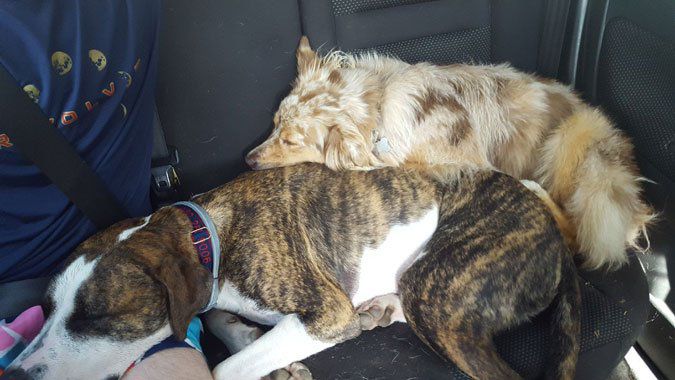 Hello, and sorry I’ve not posted for a few weeks.  Our publishing headquarters staff ran some older blog posts in place of fresh content from me, as I took a couple of weeks off for surgery – yikes!

Long story short: I had my first-ever routine colonoscopy, and it found a large mass! Crazy, because I had no symptoms of any sort of digestive, elimination, or any other health problem. But the surgeon said it had to be removed, along with the 10 or so inches of colon and small intestine it was attached to. So, the day after I shipped the October issue of WDJ to the printer in early September, I had laparoscopic abdominal surgery, and spent six days in the hospital. I got fantastic news regarding the mass on the day I was discharged: the thing was benign, so no further treatment will be needed.

Fortunately, I had a couple of weeks between the colonoscopy and surgery to figure out what to do with my dogs, both while I was in the hospital and after I came home, so they wouldn’t be going crazy for a lack of walks (and so Woody wouldn’t be jumping on me as I lay on the sofa, as he is wont to do). My husband was home, but he had a too-full workload and would also be waiting on me, so sending the dogs away made the most sense.

My sister and her husband, who have three very small dogs and one small/medium-sized one, took in my 70-pound senior dog, Otto. Three of their dogs are terrier-mixes and have the same sort of scruffy faces that Otto has; he looks like a zoomed-in version of them. Given how much I have fostered dogs and puppies over the years, and how weary Otto has grown of having rude guest dogs in his home, one might imagine that he wouldn’t like staying with four small barky dogs – but actually, he seems to adopt an entirely different persona there.

At home, he plays the elder statesman, too dignified to romp or wrestle with other dogs, and quick to nip any canine nonsense from Woody and other dogs in the bud – the classic “fun police” behavior. But at my sister’s house, he instigates all sorts of play! He wrestles and rolls around like mad with the little guys, especially the newest member of the pack, a nine-pound, perhaps three-year-old former stray named Lucky. My sister said that Otto grabs toys and initiates games of “chase me” with Lucky, something I haven’t seen him do for years with any other dog.

Also, he’s never, ever, slept on my bed. I have nothing against dogs sleeping on beds, I just personally don’t like dog hair on my bed, nor waking up uncomfortable because the dog is taking up all the room. At my sister’s house, he helped himself to the queen-sized, elevated bed in the guest bedroom, and slept with his head on the pillows!

My 25-year-old son took my almost-two-year-old dog Woody for a couple of weeks. An athlete himself, my son is the best candidate for giving Woody enough exercise to keep him out of trouble. Woody also gets along well with my son’s dog, Cole, an all-black Black and Tan Coonhound, and my son’s roommates, who are also athletes and also love dogs. At one point during their stay together, my son took Woody on a weekend retreat to the mountains with his sports team, comprised of twenty-something twenty-and thirty-something guys, all of whom love dogs. Woody swam and hiked and played fetch until he collapsed in happiness. When my son brought Woody home to me, about two weeks after my surgery, after a brief period of excitement, he rested quietly with me for days! He was tired!

I am very lucky to have family who are ready and willing to help with my dogs, and who would even keep my dogs for the rest of their lives if something happened to me – and I know this because I asked! I don’t take this for granted; I’ve seen many dogs at my local shelter who were brought there by friends or relatives of the dogs’ deceased owners. That thought is just torture for me.

My husband and I have been talking for years about how we need to write wills and set up a trust, so whichever one of us survives the other and/or our children can avoid probate while settling our affairs – but we haven’t yet done anything about it. This episode prompted me to renew my advance healthcare directive and start taking notes about a will and a trust. No one who knows me will be surprised to learn that most of what I have on paper so far concerns the dogs.

Frequent WDJ contributor CJ Puotinen wrote a terrific article on arranging for your pets’ care after your own death. I’m reviewing it as I take notes. Check it out here.