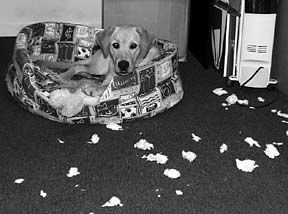 Regular readers of Whole Dog Journal know that my dog, Rupert (who is usually pictured here with me), is pretty much perfect. Aside from very occasional, very minor infractions of the rules (such as sneaking the cat’s food), he is a total joy to be around: affectionate, obedient, fun-loving, and well-mannered in every environment.

It wasn’t always like this, however. Rupie’s first two years were trying. He got violently carsick, suffered from submissive urination (you couldn’t even give him a hard look without making him pee), had an uncanny instinct for selecting only precious items to chew, and he would hit the end of his leash like a wild trout if you tried to make him walk across (or even near) irregularities in concrete, such as manhole covers, basement doors, or even grooved non-slip ramps. He was one strange pup.

But Rupert started blooming around age two, and he’s gotten better every year. He’s currently 10 years old, and the only time I ever have to correct him now is when he guesses wrong about what I want from him – before I have asked him to do anything!

All of which explains why I’m having such a difficult time adjusting to having Paws here. Paws is a seven-month-old yellow Lab who belongs to John and Kathy and their daughter, Lisa, a family I know through my son’s school. Through social chat at a school function, Kathy found out that I edit a dog magazine, and before I knew it, I was being regaled with stories about Paws. It sounded like he was a real handful. The family had enrolled in a puppy training class, only to have Paws dubbed the “problem dog” of the class and confined to a leash when all the other puppies got to run free. He was rambunctious and oblivious to verbal commands, difficult to walk even wearing a pinch collar, and prone to chewing the kitchen floor or cupboards when left home alone.

So when Kathy asked me if I knew anyone who might be able to provide daycare for Paws on the two days a week that no one was home with him all day, I thought, “Why not me?” I work in an office on the ground floor under my house, I have a big (and completely unlandscaped) backyard, and I have Rupert, who could provide mentoring. How hard could it be?

I can only compare those first few days to a grandmother’s experience baby-sitting the grandkids: You may have raised children yourself, but oh my, what a long time ago that was! I had completely forgotten how exhausting it is to have a puppy around! And how they get into EVERYTHING within reach! And how they can’t be left alone for five minutes without doing something you don’t want them to do!

I thought my backyard was dogproof – but come to think of it, I really don’t want a huge hole dug right next to the neighbor’s fence or a “Squirrel in the Tree!” alarm every two minutes. I thought my office was a safe place to leave a snoozing dog – but came back from a 15-minute trip to the photo lab to find three different items taken off the shelves and chewed on. I thought I was thoroughly educated about the benefits of using only positive training techniques – but couldn’t help myself from delivering a swift swat when Paws leaped up and planted his garden-fresh feet on my clean white shirt. It’s been a bit of a trial.

On the other hand, it’s been fun, too. It’s good for me to remember what it’s like to spend time with a less-than-perfect dog, and given me an opportunity to try out the training techniques I’ve learned in the last two years (but were pointless to subject Rupert to). It’s also cooled my son’s fever for a puppy of his own; now that he sees how much work puppies are, he’s started talking about getting “a grown-up dog from the pound.” For now, a two-days-a-week puppy fits the bill.