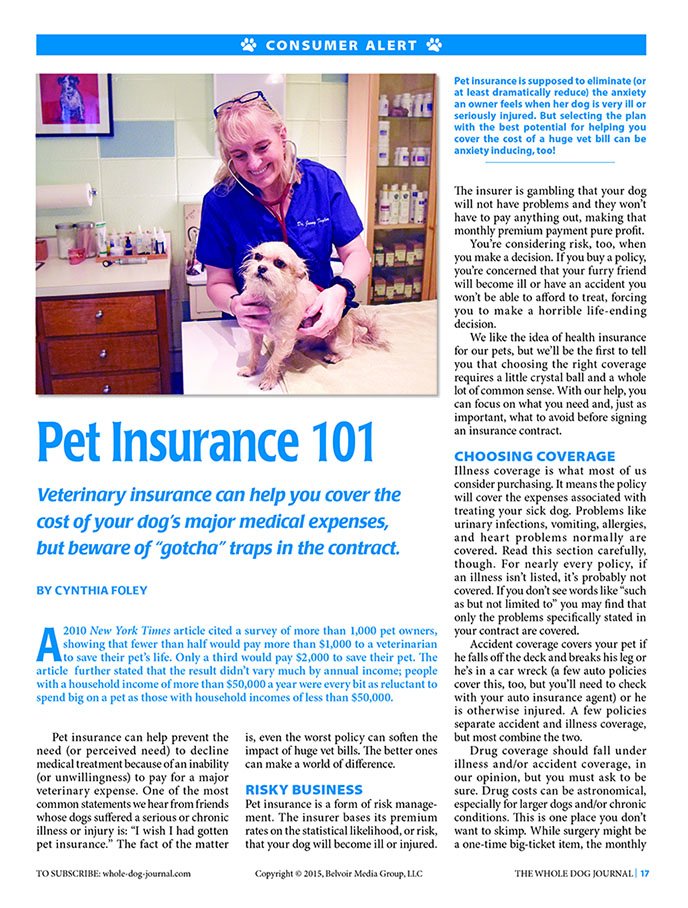 I just finished reading your pet insurance article in the September 2015 issue and have to agree how important pet insurance is to have. We just lost our precious little Beagle, Rascal, to meningeal encephalitis at 101/2 years old – a horrible thing to see your pet go through. We were willing to do everything we could to save him.

Rascal started “circling” and we went to our vet, who sent us to a neurologist at a veterinary specialty and emergency clinic that is out of town. We paid more than $4,800 there, for the neurologist, MRIs, blood work, spinal tap, and overnight care. We went home with a bag of medicines and low hopes of saving him.

A week later we went for check up, more fees. We were told that the swelling in his brain was going to cause him to have a mental disability. As long as he was comfortable and able to function we didn’t care. We have a handicapped son, so having a handicapped dog wouldn’t be a problem. We had another ER visit due to seizures, and then traveled to the University of Florida veterinary teaching hospital to see what treatment they could come up with. More medicines; I’m still adding up those fees. We went back to the neurologist. More medicines.

In between these trips we saw a little bit of our Rascal’s personality. There were periods in which he would stop his circling, respond to his name, and eat. There were times I carried him because our tile floors were difficult for him because of weakness on left side. We were determined to try as long as he did.

He was having a good day when we took him to the neurologist the last time; he even trotted out to our vehicle. On this trip we dropped him off for the day and hung around town for five hours. When we got back, the neurologist came out to lobby and told us to come quickly into a room. After the MRI Rascal’s temperature spiked and it wouldn’t go down and they couldn’t get him to wake up. We went back to see him and after laying with him, crying, telling him I love him and I was so sorry this happened, I made the decision to let him go. That day trip alone was another $4,100.

All in all we paid out well over $12,000. I don’t really know the exact amount because it doesn’t matter, we were in it until the end. I was told I put good money after bad, because we lost him anyway, but I had to give him a chance. Can we afford to spend that money? No. Especially since we are trying to start building a new house.

Bottom line: If we had insurance I would have saved a lot of money and not broken the bank. But would I have done anything else differently? No.

We’re so sorry for your loss. What loving owners you were to Rascal!

I know that in some cases pet insurance can be a lifesaver but as you pointed out in the article, people should know it varies widely. I purchased insurance when I brought my pup home at 8 weeks. He had all clearances from a reputable breeder. I thought that by purchasing the insurance for him right away I would have it for years to come and not have to worry about pre-existing conditions.

When my pup was 9 months old, the vet discovered a very serious heart condition, which ultimately required life-saving surgery only available at Colorado State University Veterinary Teaching Hospital. My pup had the surgery – successful! – and today, at 10 years old, is still living a healthy, happy life. But the insurance company denied my claim for reimbursement for the surgery, all associated diagnostics, and after-care, because the policy I had bought excluded coverage for congenital conditions. This was not genetic; many plans will exclude genetic conditions. His heart problem was something he was likely born with but was not detected in the puppy cardio exam, but they enacted the exclusion and denied coverage.

This is just a cautionary note; it’s wise not to rely on it being there without question. I believe for accidents the coverage is more reliable.

In spite of the fact that I purchased the top plan that the company offered at the time, I thought their payments were such a small percentage of the office visits that it was hardly worth it. I thought I was purchasing pet insurance for a catastrophic illness, but when one happened, the company was not there for me.

We’re glad your dog is still alive and well, so many years after serious heart surgery! As author Cynthia Foley warned in the article, owners have to look hard at the exclusions in the policies they buy, and ask company representatives exactly what the exclusions would mean in the case of various events. Of course, hindsight is 20/20, and no one can predict what might happen with dogs! I’m guessing you filed an appeal for your claim? Foley also strongly recommended that owners appeal (and appeal again) if they think a reasonable claim has been denied – because often, these appeals actually work.

I have bought pet insurance for my pets as long as I have known about it – 20 years!

As a shelter volunteer, shelter dogs adopt me, and along with the adoption comes 30 days’ free pet insurance with 24 PetWatch in combination with the microchip registration.

My last two dogs died from cancer. One had melanoma, and radiation treatments prolonged her good life. My other dog developed lung cancer. The cancerous lung was removed and he gained seven more months of good life before cancer developed in the other lung. Both dogs had good quality lives and were happy until the end.

Fortunately, with pet insurance, I was reimbursed for 80 percent of what I spent on them, and my pets experienced the best life they could have.