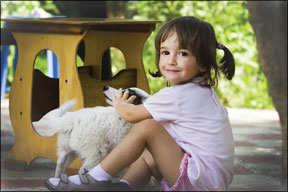 A new study shows that unsupervised children are most at risk for bites, and that the culprits are usually family pets. The study, by Vikram Durairaj, MD, of the University of Colorado School of Medicine, also found that if a dog bites once, it is likely to bite again, with the second attack often more brutal than the first.

The study looked at 537 children treated for facial dog bites at The Children’s Hospital on the University of Colorado’s Anschutz Medical Campus between 2003 and 2008. Durairaj found that 68 percent of bites occurred in children 5 years old or younger with the highest incidence in 3-year-olds. In most cases, the child knew the dog through the family, a friend, or a neighbor. And more than half the time, the dog was provoked when petted too aggressively, startled, or stepped on by the child.

Durairaj found that mixed breeds were responsible for 23 percent of bites followed by Labrador Retrievers at 13.7 percent. Rottweilers launched attacks in 4.9 percent of cases, German Shepherd Dogs 4.4 percent of the time, and Golden Retrievers 3 percent. The study was done in the Denver area where pit bulls are banned.

“What is clear from our data is that virtually any breed of dog can bite,” Dr. Durairaj said. “The tendency of a dog to bite is related to heredity, early experience, later socialization and training, health, and victim behavior.”

He stressed that familiarity with a dog is no guard against attack and if a dog bites once, it will likely bite again with the second attack often more vicious that the first.

Dr. Durairaj, an associate professor of Ophthalmology and Otolaryngology-Head and Neck Surgery, presented his study in October 2010 at the American Academy of Ophthalmology’s annual meeting. He said dog bites are especially devastating to children because they are smaller and their faces are within easy reach of the animal’s mouth.

We agree with Dr. Durairaj on this point: Young children should never be left unsupervised around any dog, even for just a moment. 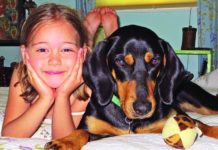 Dogs and Children: How to Keep Them Both Safe 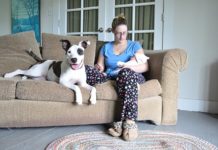 Postpartum Depression and Its Effect on the Dog