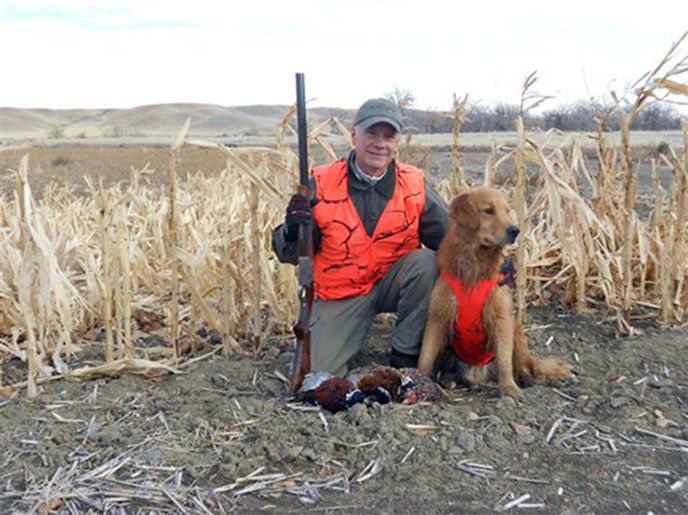 On October 25, 2013, three days before his dog’s fifth birthday, Dan Owen of Helena, Montana, went pheasant hunting with his friend Doug Denler in Shonkin, Montana, 40 miles east of Great Falls. Owen’s Golden Retriever, Dusty, and Denler’s Brittany Spaniel, Radar, were experienced hunters. “It’s really desolate looking country,” says Owen, “full of coulees, creeks, gulches, and ravines. We started in the morning, when the day was cool, and it gradually warmed up.” In the early afternoon they crossed a creek to a small island covered in tall grass where the dogs followed pheasant trails. “By then it was getting warm,” says Owen. “My main concern was all the burrs that kept collecting in Dusty’s tail and on his coat. But then Dusty disappeared and didn’t come when called, so I got worried. A few minutes later I saw him standing in the creek holding his foot up and I knew something was wrong.” Dusty grew weak and collapsed in the creek, and when they pulled him out and examined him, Owen and his friend saw puncture wounds on Dusty’s right paw. “I grabbed my cell phone to call the vet, but we were in the middle of nowhere with no cell coverage, and we were a good three miles from the truck.”

Denler, an ex-Army Ranger, took off with Radar while Owen stayed with Dusty. “Quite honestly,” he says, “I was expecting the worst. Dusty was just lying there, and then he began to convulse. His leg began vibrating and shaking, and he got that closed look in his eyes. I took my shirt off, wet it in the creek, and spread it over him to help cool him down. I talked to him the whole time, and I prayed. I was really frantic, especially at the thought of him dying so close to his birthday. Then a calmness came over me and I felt peaceful and relaxed. Something told me not to worry. So I just stayed there with him and talked to him, and after a while he moved a little and opened his eyes. I’d been wondering how in the world I was going to haul my dead dog out of there but now I realized there might be hope.” Owen assumed it would take hours for Denler to return with the truck, but suddenly there he was on a nearby bluff with the pickup. “A rancher whose land was adjacent to where we were hunting showed Doug a shortcut that saved considerable time, and he called the Big Sky Animal Medical Center in Great Falls to let them know we were coming. Apparently the area is rattlesnake heaven and Dusty wasn’t the first dog to get bitten there. Doug drove while I held Dusty, and as soon as we arrived, with Dusty all covered with burrs and semi-conscious, he received the antivenom.” After Owen arrived home in Helena, the veterinarian called to say that Dusty was recovering well. The next morning, Owen returned to Great Falls to pick him up. “He didn’t look anything like a show dog,” says Owen. “They had shaved his tail rather than pull all the burrs out, so he looked pretty chopped up, but I had never been so happy to see him. He was still weak, but after a quiet day at home he started to bounce back. Two days later we took him to our local vet for blood work and his recovery continued. His only follow-up care was the application of cold compresses on his leg for 10 to 15 minutes at a time two or three times a day. By the fourth or fifth day, he was himself again.”

How to Prevent or Treat Bites from Poisonous Snakes Snake Avoidance Training for Dogs Are You Sure It Was A Rattlesnake? Appreciating Rattlesnakes Why Are The Effects Of Snake Venom So Varied?