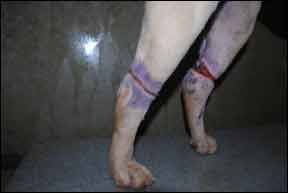 I was in my local shelter one day last week when a couple brought in two intact male pit bull-type dogs. Both dogs were white, which made it easy to see how filthy dirty they were – and to see the wounds that each of them had. The larger, overweight dog had what may have started as a sunburn and developed into a dermatological condition. But the younger, smaller dog had truly ghastly wounds on his hind legs; it looked as if he had been tied up (or even hung) by ropes around his hind legs. Something had cut into his flesh all the way around each hind leg – but the wounds were not fresh. The wounds were partly scabbed, partly infected and raw, and the dog’s hair bore the traces of a purple topical wound treatment. The legs were also swollen and the dog was limping on one and then the other leg.

I was discussing another matter with one of the shelter employees, and heard just bits of the conversation between the dogs’ owners and the counter staff. I heard the male owner say, “We were out of town for a day and he got caught in wire; he was caught when we got back.” My blood boiled; those wounds were not caused by a dog caught in wire. I am not a front counter staffer at a shelter for good reason.

Later, after the dogs were admitted to the shelter, I asked the front counter staff about what the story was. She said that a county animal control officer learned about the dogs, investigated, and told the owners if they did not seek immediate veterinary attention, she was going to charge them with animal cruelty and neglect – or they could surrender the dogs. They said they couldn’t afford to treat the dogs, so they were surrendering them.

I borrowed a staffer’s camera so I could take pictures of the dogs. They kept trying to lick me through the cage bars, making it hard to get a good picture. With a kennel worker nearby to help me if need be, I entered the kennel – and both dogs gently bowled me over as they tried getting in my lap for petting and kisses. They were total sweethearts – which made me feel even worse for how poorly they had been treated. Why is it that some of the nicest dogs are so badly treated by people? And how do they manage to stay friendly after such abuse and neglect? 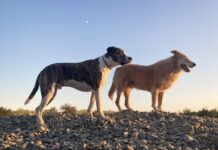