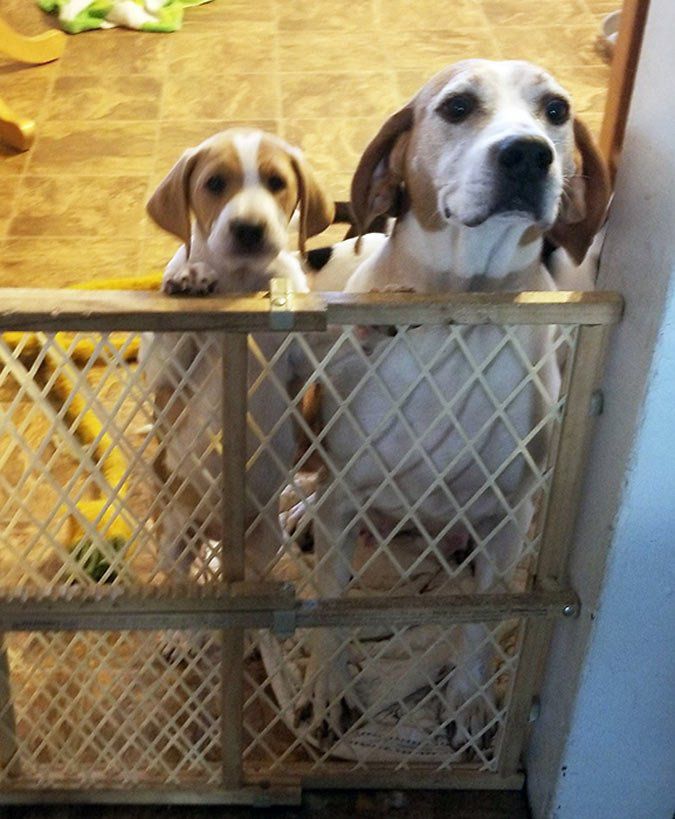 Usually, when I foster, I choose a smart and cute wayward adolescent who needs some training and guidance, and I actively participate in the search for an appropriate home for the dog, and then provide guidance and advice to the new owner. Or, I foster a litter of puppies who are going to be adopted lickety-split. Either way, I usually feel great about the whole thing – getting to help a dog become more likely to succeed in his or her happy new home. Today, though, I’m sort of miserable and sad.

As you may have read here before, my most recent fostering project is a heartworm-positive mama hound and her seven puppies. The puppies, as ever, are going to fly off the shelves – that is, they are certain to elicit an ample number of applications from the website of the coonhound rescue responsible for taking on the whole mess and finding the family appropriate homes.  But the mama – who is going to take the mother hound?

I did not particularly enjoy having the mama hound at first. She was so emaciated and neglected when she arrived, 10-day-old puppies in tow, that it was understandable that she was rather protective of her food. I had to make sure no other dogs were anywhere in the vicinity of her food – not even her own puppies, once they began crawling around. She would get a little harsh in guarding her meals from them, and even taking over their food from them, if she got a chance.

It was obvious to me that she has received very little handling and training. If you snapped a leash on her collar, and pulled on the leash (either to prevent her from going somewhere she wanted to go, like back into the kitchen to eat the puppies’ food, or to get her to go somewhere she didn’t want to go, like outside to eat her own food), she would just sort of sink to the ground, the ultimate in passive, uncomprehending resistance. We made headway only when I armed myself with my all-time favorite, most powerful, not-at-all-secret dog-training tool: Stella and Chewy’s Chicken Meal Mixers, which I have been using in copious amounts to lure Mama in and out of the house, to reward her for pottying outside on cue, and to follow me and the leash.

Early on, Mama seemed to have near zero personality. That was undoubtedly a symptom of deep stress and anxiety – from being starved, lost or abandoned, picked up as stray, being held in a shelter long enough to have her puppies there, and then being transported to the house where I have my office. She was just very undemonstrative; she didn’t wag her tail or change expression when spoken to or petted. The only clue we had that she actually did like attention was that if you sat in her presence, she would come and stand very close to you; she liked to put her face very near your face – a quite uncomfortable sensation with a dog who has no expression, and isn’t wagging her tail or trying to lick you. She would just approach, stand very close, and hold very still – odd.

Very slowly, she grew more and more comfortable with me and the tenant who rents a room in my office/house. It took her a couple weeks to seem to realize we were keeping her and her puppies safe from the other dog who lives here (the tenant’s dog) and my dogs (who come with me to work), and that there was more than enough food to go around. (Thank goodness, I had just completed the November issue, which contained WDJ’s canned food review, so I had tons of delicious, nutritious food on hand to feed her and the babies.)

She had been here for about three weeks when she first wagged her tail – when I praised her enthusiastically for going potty. She finished, and then put on a submissive grin and trotted toward me wagging her tail, looking for the treat she now understood would be forthcoming, and why. The lines of trust and communication had opened! I actually cried as I fed and made a fuss over her – it was our Helen Keller moment.

In the past couple of weeks, she’s gotten more and more demonstrative, wagging her tail and showing more expression on her face when spoken to. She also started to play with the puppies’ toys – something she didn’t do at first, even when my two-year-old dog Woody tried to engage her in play, by grabbing a puppy toy and shaking it in front of her, then darting away. It was as if for weeks and weeks she didn’t even see the toys, and then suddenly, there they were (even though the toys were there the whole time). Any chance she got, she would steal the puppies’ toys one by one, and hide them under the bamboo in the back yard. Several times a day, I had to go retrieve all the toys and redistribute them to the pups. Darn it! I’ve started to like this dog.

All of this explains why I got so weepy yesterday, when it was time to take her to the

breed rescue’s Western-region coordinator, who runs a dog daycare and boarding facility. Mama Hound is going to stay there while she undergoes treatment for her heartworm infection and gets spayed, and then she will go up for adoption. It’s a nice facility run by a superstar of dog rescue! But when we walked into the facility and she heard and smelled lots of other dogs what I saw on Mama’s face was confusion. She got that shut-down look on her face, and started to do that “go limp,” passively resistant thing again. Clearly, she knew her circumstances were changed again – and the recognition that I broke her trust just broke my heart. I had to keep hiding my face in her coat.

My friend the coonhound-rescue-hero laughed in a kindly way at my tears. She said, “I don’t cry anymore because I know that this is another step along their journey, and things are just going to get better and better in her life.” I get that, but it’s a rationalization that humans can’t possibly make to the dog who only knows what she sees in front of her: “I’m getting ditched again.” UGH.

But I can’t keep her for the next few months as she goes through treatment. I have my hands too full as it is, with the now-very active puppies, who will be getting adopted one by one, and moving, my next challenge. And I would far prefer her to find a permanent home after treatment, rather than play third wheel in my family as a foster dog again. I’m hoping she finds a forever-home with someone who wants a pretty, calm, affectionate, playful hound. If you know someone who is looking for a sweet, quiet companion, won’t you point them to the coonhound rescue site?