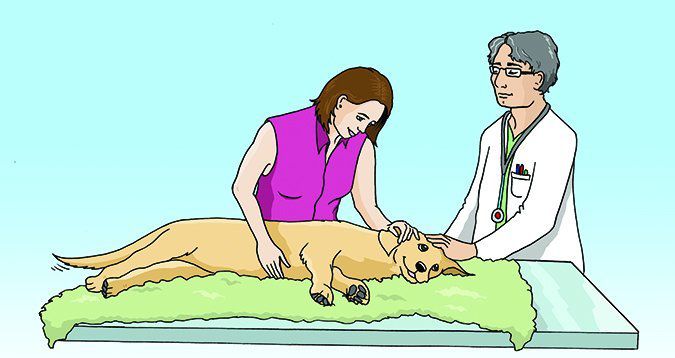 Euthanizing any pet is emotionally difficult. You know what’s going on, and the pet doesn’t; there is a lot of guilt around that. Even when the animal has been suffering, and is likely to suffer far more if you chose not to arrange for this humane assistance, most of us feel at least a little bit of guilt about bringing our friend to the vet (or a housecall vet to our pet) for that final visit. You may be experiencing anticipatory grief and sadness. You may also be feeling doubt: Is this really the time? Did we do everything we could?

I’ve attended the euthanasia of a number of animals, my own, and those who belonged to friends or relatives who felt they couldn’t be present. I’ve been present for the euthanasia of dogs and cats, my family milk cow, and several horses. It was wrenching emotionally every time – and yet, every single time, the process went smoothly. Every veterinarian who has helped my animal friends pass from consciousness has induced this calmly, professionally, and with great sensitivity. Given the difficulties with the medical or behavioral problems and trauma that necessitated each euthanasia, I couldn’t be more grateful to the veterinary professionals who provided this valuable service.

But I guess I’ve been fortunate; I’ve never been present for a “bad” euthanasia. It stands to reason that the drugs can’t always affect all animals they are administered to exactly the same way. Every drug can cause a bad reaction, or be ineffective, in some individuals. And not all vets or vet techs are equally skilled at handling pets (especially pets who are in pain); not all are kind and empathetic.

In the August issue of WDJ, we’ve published accounts of two unpleasant euthanasia procedures – events that have left the owner involved feeling traumatized and guilty – and a discussion of how to do the most you can to ensure that your pet’s final vet visit is without fear, pain, or trauma. Of course, you can’t control the experience; you can only choose the veterinary hospital and veterinarian with whom you feel most comfortable, and then you have to sort of hope for the best: a calm, pain-free passage from this life to whatever comes next. The article offers a lot to think about, and a lot to ask your veterinarian, before scheduling an appointment for euthanasia.

Did you ever experience a traumatic event during the euthanasia of one of your pets? Was there anything you would have done differently?