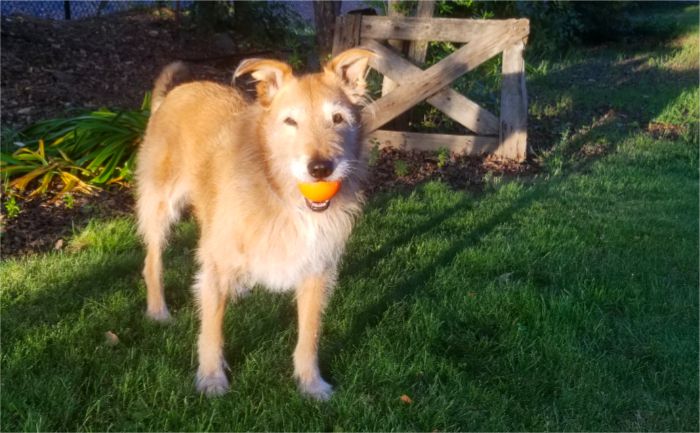 Barbara Dobbins, my friend and frequent contributor to WDJ, once wrote a post for this space that described how her senior Border Collie, Daisy, had earned a “permanent hall pass” for jumping up on the counter to help herself to any food that had been left out. Two years into cancer treatment, Dobbins was happy that Daisy had an appetite! She also described other dogs she knew whose owners had decided to look the other way when the dogs did naughty things.

Otto is definitely showing some signs of aging

At 12 ½ years, my senior dog, Otto, has seemingly decided he should get a pass, too. My husband and I are not sure whether he’s getting a little senile, or simply emboldened by the plethora of as-yet uneducated foster puppies that have been trampling the landscaping and chewing drip-irrigation lines (or, alternatively, whining in a crate), or some combination of these things. Whatever the cause, the fact is that his behavior has begun to deteriorate just a bit.

Don’t get me wrong; he’s still a very, very good dog! But, adolescent misadventures aside, he’s always been near perfect – like the kid who sits in the front row and always – ALWAYS – has his hand up in class. If he hears me telling any other dog to “sit” or “down” or “come here,” he’ll pop up out of a dead sleep and run over to prove that he can perform those behaviors better and faster than the other dog can. So it’s a bit of a shock to have him completely blow me off when I call him after hearing him roar his terrible roar at the FedEx truck that’s passing by our house, and see him go tearing down the fence line, determined to chase the truck to the very edge of our property. How do I know he actually heard me and decided not to leave the chase? Because I could see him look over his shoulder and hesitate just a moment, and then decide, “Oh forget it, she’s too far away.”

He’s also apparently decided that enough is enough when it comes to the relentless fetching of our younger dog, Woody – one of those dogs who would likely fetch until his feet turn bloody or until he passes out from heat exhaustion. If Otto is by himself, he will fetch a time or two, and then, chase the ball or other fetch item a third time, but just as he’s about to reach the fetch item, seemingly catch a whiff of some mystery aroma he just HAS to check out! “Excuse me, Mom, I think there was a raccoon on our lawn four nights ago, I should investigate.” In other words, he’s never been all that into fetching. But suddenly, he’s started to get very competitive when Woody is fetching.

He’s not nearly as fast or as coordinated as Woody, but he’s started to insert himself into any session of fetch, trying to beat Woody to any throw where that seems likely – which, because Woody never watches the ball, but just takes off running in the most likely direction, and Otto actually visually tracks the ball, Otto can get to more of the throws than he ought to be able to at his age. He also will try to intercept Woody on his way back to me with the ball and forcibly take the ball from him! Thank goodness, even though Woody is 4 ½ years old, he is still very submissive in the face of Otto’s “attacks.” He doesn’t quite give in, but he has not yet once tried to retaliate, either; he either tries to outmaneuver the older dog, or will stop and hunker down in a submissive pose, holding the ball tightly in his mouth and squinting his eyes tightly shut as Otto bites his face, trying to get the ball. “Sorry, man, I just can’t let go!”

Does Otto actually want to play fetch himself? Is he jealous of the attention that Woody gets for fetching? It seems that he just wants the ball; if he gets it, he just leaves with it! “Ha! That stupid game is over!” he seems to say. And, yes, I’ve tried having two balls on site when we are playing, so if Otto steals one, Woody and I can play on . . . Otto will drop whichever one we let him have and come in pursuit of the “active” ball in the game, so lately I’ve been putting him in the house when Woody needs a good, long session to work off some energy. I don’t want him to get hurt trying to overdo the fetching heroics!

It’s just weird, because he used to just watch Woody fetching like, “Yuck! What an idiot!” And now he’s like, “I have to STOP this!”

Other changes in Otto’s behavior

Also new: For most of his life, even if he didn’t want to do something, like, suffer through a bath in the yard with a hose, he would come when I called him. Slowly, sadly, but he would come (and he would get thanked, rewarded, and fussed over). Now, if he sees a hose and thinks a bath might be in the works, he just leaves, even if I’m calling him. “Nope! Just… nope!” He thinks – actually, he knows – I’m just not going to make him suffer through a hose bath anymore if he doesn’t want one.

But the biggest surprise came a few days ago, when my husband left his dinner unattended on the coffee table for a minute, and Otto just started helping himself to the food. WHAT?! He’s NEVER been a counter-surfer or helped himself to food like that before, which made both my husband and I wonder if this is a bit of dementia creeping in. He actually looked a bit surprised when both my husband and I, shocked at the same time, yelled “Hey!” I told my husband, we have to treat him more like a puppy again; we can’t take it for granted anymore that he knows all the house rules and will follow them. While I’m happy to issue him that “permanent hall pass,” and will likely just go ahead and let him have the rest of any burrito he manages to steal from now on, part of me is a little sad at these age-related behavior changes. Dogs just don’t live long enough! We’ll cherish all the time we have together, a little more now.