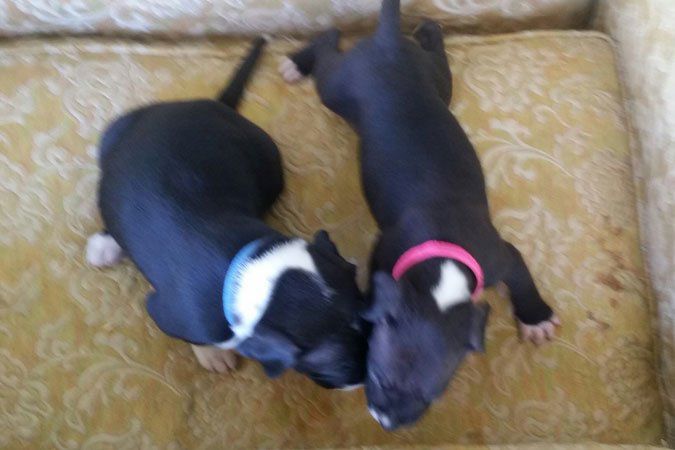 As I mentioned last week, I’m fostering a very skinny Great Dane mama dog and her 11 puppies. After this litter is healthy and ready for spay/neuter and adoption, I’m going to take a little break from fostering for a while, even if I have to block the phone number of my local shelter. This is a lot more work than anything I’ve taken on before.

(I’m kidding about blocking the shelter’s number, of course. I couldn’t be more grateful for the very hard work they do for the animals in this community, year-round, whether they are exhausted or not, broke or not. The hard-working employees don’t slack off because they are tired of the animals’ needs, or because the animals have cost them a lot lately. I have a choice, and I feel privileged to be trusted and able to help when I can.)

This mama was picked up as a stray by a county animal control officer on a Monday. It was obvious mama had puppies somewhere, but where? On Friday, the shelter got a call from the person with all the puppies whose mother was missing. He saw her photo on the shelter website, and called to say that the shelter had his dog, but he didn’t want her OR the puppies, who were now – obviously – in a lot of distress. This is not out of the ordinary behavior, in my area. When I moved here, in the upper Sacramento Valley, about 10 years ago, it felt like I had moved back to the 1960s, at least in terms of typical dog-keeping practices. Spay/neuter rates are low, lots of dogs live outdoors (some on chains) 24/7, wandering/loose dogs are super common – and lots of people seemingly never think to go look for or recover their dogs from the shelter.

Anyway, the first week I had the mom and her puppies, she LOST five pounds, despite the fact that I had a high-quality kibble in front of her all day and night, and was feeding her about four cans of food a day, and letting her drink any puppy formula that I made that the puppies didn’t drink. And some of the puppies were doing way better than some of the other puppies. Two in particular refused to try any supplemental food of any kind, and weighed more than a pound less than their littermates. So I separated the six fat ones from the five skinny ones, and put the skinny ones with mama. She was far more able to feed five than 11, and has since gained back those five pounds and a few more.

One of the fat pups started to drop weight in the pen when he was cut off from Mama, so he went back to the skinny group. There is another puppy that is the fattest of the skinny ones, who I tried in the fat pup group, but he, too, started to sink, so now Mama is nursing six and still holding her own.

The fattest five are doing well and seem stable, so this week, I’m going to send them to a friend’s house. My good friend Leonora, who took on a litter of six tiny Chihuahua/terrier-mixes in November (and foster-failed the littlest one), and took half of the litter of the nine Cattle Dog/pit-mix puppies that I fostered in February, is going to take on the fat group for a few weeks. That will help immensely. Keeping not one but TWO puppy environments clean, and feeding two groups with very different appetites, is, as I said before, a lot of work. It would be one thing if I had a purpose-built environment for doing this – and maybe someday I will! – but my efforts are centered around exercise pens and a portable kennel and a lot of shavings; it’s not perfect by any means. But it’s not a damp concrete pen surrounded by barking dogs at the shelter, either.

It may sound nutty, but this week, the addition of one more dog lessens my stress, rather than adds to it. Cole, my grand-dog, is staying with me for a week while my son travels across the country for his sport. Cole has grown into such a lovely young adult dog, gentle and well-mannered – AND still young enough that he is willing to play with Woody, my now-six-month-old puppy. Neither of my eight-year-old dogs will play with Woody for even a minute, so Cole’s playfulness is a valued commodity. Plus, Cole is already teaching Woody when enough is enough, a terribly important thing for adolescent dogs who are going to mature into big, strong dogs to know and accept. He’s worth his weight in gold to me right now.

By the way, thanks for all your comments and discussion on the last blog, about pediatric spay/neuter and shelter adoption. As more than one person said, there is no single right answer to the pet overpopulation problem; I hope that the combined and different efforts of the people who care about such things and are working to help dogs will keep the tide turning until no so-called adoptable dogs are euthanized anywhere in this country, ever.