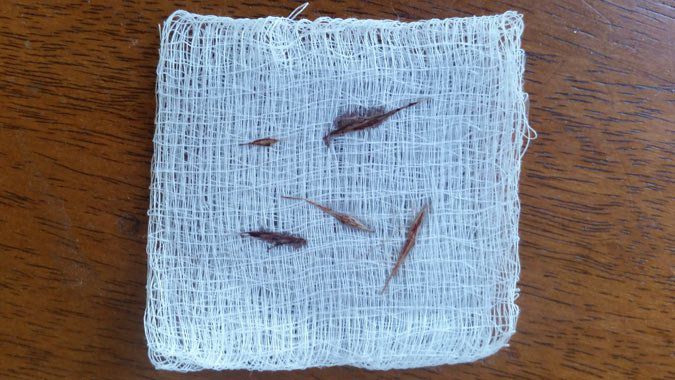 We’re well into foxtail season in California. “Foxtails” are what people call any number of grasses that have bushy spikelets that look like a fox’s tail, but the most common culprit in my home state is Hordeum murinum. This grass is a ubiquitous volunteer in the rainy months, springing up anywhere and everywhere, including cracks in sidewalks, the edges of roads, alongside trails, and in pastures. It could even be called pretty, especially as it develops its distinctive, thick foxtail spikelets, and these turn a sun-brushed tan color as warm weather dries the grass and the state turns summer brown.

Even one single “foxtail” contains enough material to make a whole kennel full of dogs miserable. Each “tail” is made up of dozens of hard, pointed seeds, each trailing an individual filament that is studded from tip to tail with microscopic barbs set in the same direction. Anything touched by the filament pushes the filament in the direction of its pointed seed. Even when the grass is green and you pick a tender foxtail, you can feel the microscopic barbs; it’s like rubbing a rasp – your finger can slide along their length in only one direction. If you try to stroke them in the opposite direction, the filament catches, bends, and breaks. And when the plant dries out, the barbs become even stiffer and more resistant, and the “foxtail” starts to come apart, with every seed in the “tail” springing away if the plant is touched.

If you walk through dried foxtail grass wearing sneakers, you will quickly experience the problem; the sharp seeds get lodged in the fabric, and every step you take pushes the seed head deeper, through the fabric of your shoe, then your sock, and into your flesh (if you are able to ignore it and keep walking).

Dogs don’t wear sneakers, but they are prone to getting the seeds in their noses, ears, eyes, between their toes, in their vaginas, urethras – anywhere there is an opening. If the dog’s coat is matted or curly, the foxtails will enter the mat or curl, and then start to dig into the skin.  The seed heads are so hard, they resist bacterial breakdown, even if they have managed to get imbedded under the dog’s skin. They can travel great distances in the dog’s body; you hear about foxtails that went into the skin between the dog’s toes, and weeks or months later, caused a pulmonary embolism when they emerged into a lung. But it doesn’t take weeks or even days to know when your dog has gotten one lodged in his eye, ear, or nose. The results are dramatic.

I pull up, by hand, as many of the plants on my property as I can, but there are far more than I can get each year. My husband and I also use a mower with a bag that catches most of the mowed grass, and that helps to reduce the number of dried foxtails that my dogs will have the opportunity to sniff up or sit on or roll around on.  My husband didn’t always appreciate my near-hysterical objection to the use of his preferred tool, the weed-eater, but, with enough time, he observed the result – essentially, helping the foxtails broadcast themselves over a wider area. If I could, I’d take a flamethrower to each plant I see, but the only practical way to reduce their numbers is to carefully pull the plants up by hand, capturing each and every “foxtail,” and disposing of them (we have green waste cans that get hauled off by the city; people say they can resist composting, and I wouldn’t even try it).

My son spent a couple nights in town last week, before leaving his coonhound Cole to stay with me for a few days while he traveled with his team over the long weekend for his sport. On his second day in town, as we were standing in front of my house and I was introducing him to a friend who had stopped by, Cole managed to sniff a foxtail into his nose. Right in front of us. Within about three seconds of walking out the front door and sniffing. You generally know exactly when it happens; the dog sneezes repeatedly, violently, and then pauses, with his nose all twitching and crimpled on one side, or he starts rubbing it violently with a paw or front leg. Cole did all that.

I bid my friend a hasty farewell and called my vet; the clinic was jammed and I couldn’t get an appointment until the next day. So we ended up taking Cole to the urgent care clinic a town away. Time is of the essence with foxtails in the nose. Sometimes the seed can go in the nose, but travel just the right way so that it ends up being swallowed, no major harm done. That is, I HEAR that can happen; it’s never happened to a dog of mine! You also hear that the seed can travel in such a way as to enter the dog’s brain and kill him. Thankfully, that’s never happened to a dog of mine, either, because I rush them all to the vet when I hear that distinctive, violent sneezing.

While you can sometimes remove a foxtail from a dog’s ear or other body part with tactful restraint, noses are too sensitive and the “nasal turbinates” too complex to visualize simply. The vets administer a sedative, so the dog is completely unconscious before they try to insert a long otoscope into the dog’s nose.  When they see the filament of a foxtail, they use forceps to grab and remove it. It can be tricky, because the “foxtail” can come apart and the vet may have to go in several times to get all the pieces. After the foxtail is removed, a reversal drug is given to the dog, and he can go home generally within an hour. The charge for Cole’s nasal foxtail removal: $400.

We were lucky. While we waited for our turn in the waiting area, another black dog came in with her owner, who said he was also there for a foxtail in his dog’s nose . . . for the third time in two weeks. Ouch.

Once in the exam room, the vet confirmed that she has seen practically nothing BUT dogs with foxtails for the past few weeks. Something about the heavy rain we got after years of drought, maybe.

This seems like the perfect time to remind people about the only thing I’m aware of that can keep foxtails out of a dog’s nose, ears, and eyes: the Outfox Field Guard – essentially a mesh bag that the dog wears over his head on walks or when out in his yard during the height of the foxtail season. Despite the funny look of the thing, dogs don’t seem to mind wearing them, and they can see, breathe, pant, drink, and even carry toys while wearing them. They can’t take treats, though, and the dog’s paws (and other body parts) are still vulnerable. But the grass awns can get into the most common and very sensitive parts of the dog’s body. See outfoxfordogs.com for purchasing info. Scenthounds like Cole may be best off rocking one all summer!

Wish us luck in getting through this summer with no further grass attacks.