WDJ Training Editor Pat Miller wrote an article for the June issue of WDJ about unconventional or unintentional cues – things that people taught their dogs that are far from the ordinary sit, down, stay-sort of behaviors. In the article, she and other trainers describe how they taught their dogs things such as locating a pile of poop that needs to be picked up, standing in a certain place and a certain pose that’s convenient for grooming, and coming when it’s time to take a daily medication. My favorite was, “You’re not going!” – which is what Pat taught her Kelpie, Kai, to indicate he shouldn’t get excited about going for a car ride, because he’s not invited on that impending trip.

Pat asked readers to send in descriptions of the unconventional cues and behaviors they had taught their dogs. I’m going to post some over the next couple of weeks; we’re getting a lot, thanks! You guys are an unconventional bunch, apparently! And Pat will be selecting one – perhaps by random, because there are so many great ones to choose from! – to win a prize.

I’m going to share my own secret cue – which is a behavior many people teach their dogs, but is particularly useful to me. Many trainers teach their dogs “Look at me” so their dogs will watch them for the next cue. I use “Look here” with my dog, Otto, when I need him to look at me so I can get a good photo for the magazine!

Here are the first few submissions from readers:

While reading WDJ in bed before going to sleep, my two dogs think this is a good time for pets and cuddling.  I tell them, “Shhhh,” and they curl up and settle down.

I have a special spot in my heart for that one!

I just read the article on Unconventional or Unintentional Cues and would like to share a few I’ve used for my dogs.

1. I often teach my dogs, “Out!” after I had unintentionally gotten them to leave the room by yelling out. Now I teach it and generalize it to mean leave the room we are in at the moment. It’s very useful in the kitchen when they get under foot while I’m cooking. It’s especially useful when a glass breaks on the floor. I know they’ll leave immediately and don’t have to worry about paws stepping in glass.

2. When my Sheltie was recovering from a broken elbow- which couldn’t be casted, I had a lot of trouble with him anticipating being picked up. After a scary incident with the dog walker when he anticipated and jumped before she was ready, I put a command to it – “Up!”  He learned over time to turn his rear toward me & wait for the “Up!” command to lift up for my arms.

I also use “out!” with my dogs at home. It’s also great for keeping a clean floor temporarily clean.

Here are some words and phrases we use:

1) We live in the country and have a very large fenced area for the dogs but dirt, mud, and grass are normal after romps. However during the winter or when it rains, they can get pretty grungy. I have arthritis so cleaning up large dogs each time they come in was a chore. I laid several soft mats in the front hall and when the dogs come in dirty or wet we say “Muddy Dog ” and they promptly go lay on the mats. They stay on them until they are dry. We taught this by asking the dog to lay on the mats and giving them a treat. If they leave before they should we just put them back with no treat but still give the cue. Doesn’t take them long to figure it out. The time spent on the mat was lengthened until they can stay  there indefinitely.

2) Our driveway is close to 300 feet long and the daily newspaper is tossed at the end in a plastic bag. Going up each day, in bad weather or winter was not fun, so we taught our latest dog to “Get the Paper.” We started with a newspaper in the plastic bag and rewarded him each time he put his nose on it. Then we went to actually having him hold it  and finally tossing it on the floor with the cue. Eventually we could throw it far away and he would get it. Now he roars up the drive and roars back with the paper and loves his “job.”

3) When we leave the house and everyone is excited to possibly go along we say “Sorry” and they know this is not their trip and relax.

4) We also taught them to run to the front door and bark if we ask “Who’s here?”

5) Several of our dogs learned to bring groceries into the house after we had shopped. It started with their curiosity about what we had purchased and they would greet us at the car door and check out the bags. We started giving them something simple like a can or box and told them to “Take it in the kitchen.” They would follow us in and were asked to drop it on the floor and then we would go out and repeat with other items until all the groceries were inside. Now we just hand our dog an item and he runs right in and comes back for more. One of our past dogs, Zeke, was so terrific at this, we experimented with the kinds of things he would take in. He could grab a plastic gallon of milk by the handle very gently so as not to puncture it and take that in. Five-pound bags of potatoes, loaves of bread, and, yes, even meat packages were safely carried in!

We also use “enough” and “go lie down” all the time so it was fun to see others use those words too!

I may have to put “Who’s there?” into place at home, especially when I see solicitors approaching the door!

Bessy, our first Bernese Mountain Dog, lived with us in an apartment at Ramstein Air Base, Germany.  The woman in the end unit took meticulous care of the yard immediately adjacent to the building. Even if we “bagged” meticulously, we were alerted by our neighbors not to dare allow Bessy to poop anywhere near the building.

Sometimes it required a mad dash, but we taught her that she couldn’t stop until we had gone “All the way” to the edge of the yard, near the woods.

That cue stuck with us through moves to California and North Carolina, even when Bessy was off leash in her own backyard.  If we said, “All the way,” she kept moving until she reached a safe area and we gave her the cue, “Find a spot,” at which time she took care of business.

Our current dog, Sadie, is the third Berner we have taught that cue. It’s especially helpful if we’re out in public – with or without a plastic bag – and need her to hold off until we can find someplace discreet.

Love it! Does anyone know if service-dog trainers teach some sort of cue for “you may not pee or poop now”?  Or is that behavior just expected? I like the cue for “not here, not now, but over there is ok!”

We’ll be posting a lot more of these in the coming days. Remember, you have until June 15 to send us your description of a useful or fun unconventional or unintentional cue and behavior. Send to WDJEDitor@gmail.com. 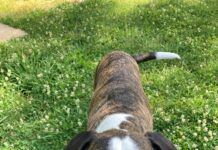