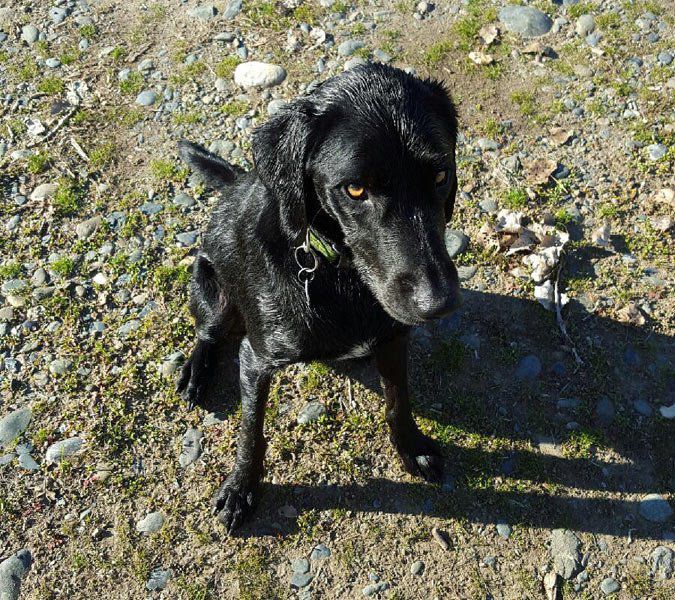 I am thankful that I’m from a family that loves dogs.

My sister hosted Thanksgiving this year. Her husband recently retired and they moved to my town – across the street from my office/house! They have three little dogs: perhaps 10-year-old Bo, a scruffy Terrier-mix they adopted from a friend whose life was too much in flux to keep him; Daisy, a 2-year-old Jack Russell-mix adopted from a Jack Russell rescue; and Dinah, the ?-year-old “mommy dog” that I fostered (along with her puppy) last summer. (My sister dog-sat for me when I was traveling and ended up falling in love with soft-coated Dinah, her first non-terrier!) Daisy is the most social and well-adjusted with guests, jumping into anyone’s lap for petting and play, but the other two both spent a fair amount of time on the laps of the people they knew. It was nice to be able to reach out and pet a dog in any room we were in before and after dinner! To keep the chaos level low, we made sure that they were the only dogs in their home.

My brother-in-law and his wife and their dogs stayed at my office/house for a few days, and tehn my son came and stayed a few days with his dog, so I had days and days of dog walks in my local open spaces. My sister’s cooking was phenomenal, but the off-leash dog walks out in nature, with mostly well-behaved dogs, were the highlights of my week.

My in-laws brought their Boxer, Rosie, whom they adopted from a Boxer-rescue; and Oliver, an older foster from the same group. Oliver is smaller and sweet, with a long tail. Rosie is a handful, and tends to “lock on” to small dogs (and other small animals), so I coordinated their movements in order to avoid unmanaged moments between Rosie and my Chihuahua Tito, who will snarl at, rather than run from, any dog he perceives as a threat to his well being. He is not one of those hysterical small dogs who will start trouble with a big dog, but he won’t exactly back down, either.

Tito and my big dog Otto stayed at my home most of the time. My son arrived to the party well after dinner and spent a couple nights with his amiable 2-year-old coonhound-mix, Cole. It seemed like Otto used to regard Cole as a big pest, but he always seems happy to see the playful dog now. He usually greets Cole with a ferocious growl (paired with a wagging tail), to which Cole responds by ducking into a play bow and then taking off at a crazy-legged run; then, the chase is on. They grab toys and take turns playing “keep away” from the other. Tito grabs a tennis ball and plays by himself, trying to stay out of the way.

When the in-laws came over to my house with the Boxers, I put Tito in a crate to protect him. When people are busy catching up with each other, it’s not possible to make sure that the dogs aren’t crossing paths or swords. Better safe than sorry. Tito didn’t complain once, even though he normally would protest with some whining or a few barks if he’s locked up in the middle of the day; I think he felt safer in there, too.

Though I’ve come to rely on Otto to help me socialize and train ill-mannered juvenile foster dogs in the past, he made it abundantly clear he wanted nothing to do with helping manage Rosie’s behavior. She’s a big, strong dog, with a very assertive presence. Here she was in his house, in his yard, and she’d greet him by walking straight up to him, staring straight at him, with a stiff, forward body – very rude canine behavior. If it had been coming from an adolescent, Otto would have likely pounced on her and demanded some sort of show of submission. As it was, he very calmly just looked the other way, every time. He’d hold his ground, changing not one bit of his posture besides turning his head in an “I don’t even see you!” sort of gesture. And it worked! After a moment, Rosie would seem to get bored and move on to something else.

They were all fine when we were out on walks together, though. Rosie and Oliver mostly hung together on the trail, and Cole and his “Uncle Otto” were almost always within a few feet of each other; Tito mostly stays closest to the humans. The tactic keeps him from getting run over, and he’s ready in case anyone wants to give good little dogs a treat.

We had only one naughty dog incident in four total days with dogs out on the trail. We were in a densely wooded area, near an algae-covered pond, checking out a small, overgrown cemetery that dates back to the early 1860s. All of a sudden, we heard rhythmic crashing sounds in the dried leaves and underbrush – a deer who suddenly discovered that there was a pack of dogs nearby, and who decided to run for it. Otto and Cole were closest to her, and both of them knew exactly what those crashing sounds were. They took off after her. The other dogs, closer to us, immediately responded to our urgent calls, and stayed by us. We rewarded them quickly and extravagantly, and leashed them.

Otto was the leader, and closest to the deer. I was appalled that he failed to respond to my cues of “Off!” and “Come!” but the temptation was too great; the deer was only about 50 feet ahead of him when she started running. Cole was maybe 100 feet from her, and he actually stopped and turned back for a moment when he heard my son’s calls – but then he succumbed to the double temptation: Running deer! And running Otto!

Otto isn’t very fast, though, and though it’s clearly a blast for him to strike up a chase, he’s not so “gamey” as to chase anything for very long. He circled back and galloped back to us in less than a minute, eyes shining and very pleased with himself. But without Cole.

My son and I both called for a few minutes, listening between shouts for sounds of the deer or the dog. Then we heard more crashing sounds, and here was Cole – 100 percent soaked, from the tip of his tail to the top of his head, and covered with tiny green plants. In his haste, he must have run right “onto” the pond, mistaking the green surface for solid ground, and landing hard enough to carry him completely under the surface of the water. He shook and shook for the rest of the walk, trying to get all the water out of his ears. I’m most sorry to report that we didn’t get a picture of him covered with the little green specks; he looked sort of like a space alien. He just would not stop shaking and sending the green specks flying.

We kept a much closer eye on the dogs from then on, calling them back to us again and again, and rewarding them with the ample treats we brought along. We saw a lot more deer, including whole herd of them trotting a few hundred yards away, but by then, all of the dogs were clearly more motivated by the treats and praise than the prospect of another chase, and we had no more incidents, on that or any other walks.

Four days, five dogs on the trail and three different ones by the Thanksgiving dinner table, and no further incidents . . . it was a wonderful holiday.