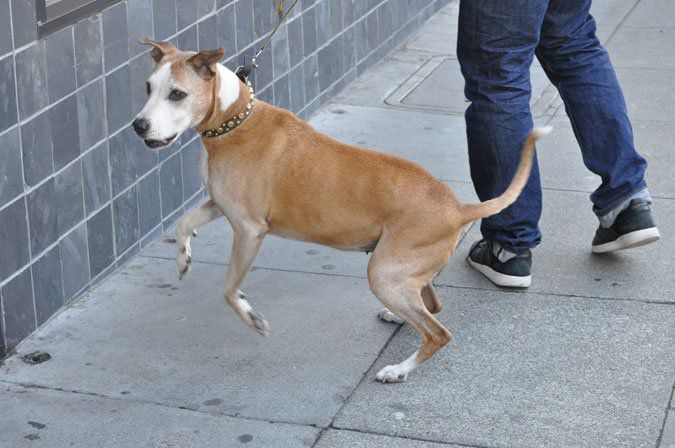 This happened to two couples I know – one, very recently: They adopted a dog who turned out to have some “issues.” Each couple hired a trainer to help them manage and change the dog’s behavior. The trainers started out with teaching them very dog-friendly basic training techniques that helped them get their dogs’ attention, improved basic obedience and cooperation, and generally encouraged the couples that there was hope for their dogs. But then, when progress wasn’t being made fast enough – at least, in the eyes of the trainers – the trainers started using (and encouraging the couples to use) punitive, force-based methods. In both instances, my friends contacted me to ask for a reality check, like, “Is this okay? Is this what we should expect?” In both cases, my answer was, “Oh heck no!”

In the first case, my friends had adopted a small dog who was so reactive on leash, that he would suddenly lunge and snap at passersby. He didn’t actually manage to make contact with anyone’s flesh, but he bit shopping bags, coat and skirt hems, and the leg of someone’s pants, despite the best efforts of his very dedicated owners to keep him away from other people, and especially other dogs, when they walked. On my advice, they hired a trainer who advertised that he used dog-friendly methods, and was an alumni of a prestigious dog-friendly trainer academy, for private lessons.

The trainer taught them to ask the dog to look at them on cue, to look at other dogs or people and then choose to look back at them, to sit and stay very reliably when someone was approaching or passing when they just could not avoid this (they live in a large, busy city), and the dog was making great progress. They were dedicated to training him, and generally happy with his progress, but the hardest nut to crack (so to speak) was the unpredictable lunge-and-snap behavior. I kept encouraging my friends, because it seemed like they were getting somewhere and were highly invested in the dog – and they even took the dog in for several extensive veterinary workups and blood tests, to make sure there wasn’t a physical problem or thyroid imbalance that would help explain his hard-to-predict aggressive behavior.

But around this time, it seemed like the trainer grew frustrated with the persistence of the dog’s lunge-and-snap behavior. He brought a choke chain to their next few sessions, and showed my friends how to “pop” the dog if it looked like he was about to lunge. They saw that the trainer’s method was successful in (at least temporarily) controlling the dog, so they tried it, with a little success. Maybe all the positive stuff had to be balanced with a little discipline, they thought.

In very little time, however, the dog’s aggressive behavior started to increase, and he began to behave aggressively in more situations, many of them unpredictable. And while he had seemed to improve in the first few sessions in which the trainer had “popped” him, he abruptly started getting worse, growing much more dramatically aggressive when subjected to the things that triggered him (people and especially other dogs passing by). My friends discontinued their lessons with the trainer after one session in which the trainer appeared to lose his temper repeatedly, yanking the dog repeatedly with the choke chain, at several points lifting him off the ground, and yelling at him loudly.

My friends consulted with another trainer, who witnessed the behavior and had some minor suggestions, but admitted she didn’t have any significant answers about what else could be done.

Some weeks later, when one of my friends was sweeping their front sidewalk, and his partner opened the front door to tell him something, the dog bolted out the front door and ran like a lightning bolt next door, where their neighbor was also sweeping, and without a second of premeditation, attacked the neighbor, biting him in the leg. With great sadness, they decided they could not keep an animal that was this sort of unpredictable liability, and they returned him to the shelter he was adopted from. After an evaluation by the shelter, he was euthanized.

This is a story I will tell over Thanksgiving to my in-laws, who have a lovely adopted Boxer, and are fostering another one – and who are dealing with the first dog’s mild reactivity to other dogs when walking on leash. They, too, hired a trainer who advertises as “dog-friendly” to help them, and the lessons have paid off in spades. Their dog now knows to “look at” them on cue, and to sit calmly when cued, ignoring the passersby and their dogs, too. Yet, while I haven’t yet heard why, the same trainer also insisted that they buy and use a prong collar on the dog when walking. “Should we use it?” my sister-in-law asked me. “No!” I responded. Instead, I’ll help them when they come to stay in my office/house for a few days over Thanksgiving, and we go out for walks every day. And I’ll be sure to tell them the sad story of my other friends’ dog.

Folks, read our back articles. Pain-based, force-based, intimidation-based, fear-based, and even discomfort-based methods all tend to make aggressive behavior worse over time. You may be able to intimidate a dog into behaving better in certain circumstances, but unless you seriously and systematically address his stress – the things that get him anxious or aroused – the behavior will continue to pop up from time to time, and pretty much always when you least expect it and least wish for it to happen. You have to improve how he feels when he’s exposed to his stressors – and leash pops and yelling certainly won’t make him any less anxious or defensive about them. And next, you have to teach him a more rewarding response, something he should do (as opposed to telling him all the things he should NOT do) when he sees one of his stressors. The process takes time and commitment, but it can be, and has been, done time and time again. Usually, with people who are working with trainers who have lots of tools in their training “toolbox,” and who don’t give up on the dog-friendly stuff when they get stuck.