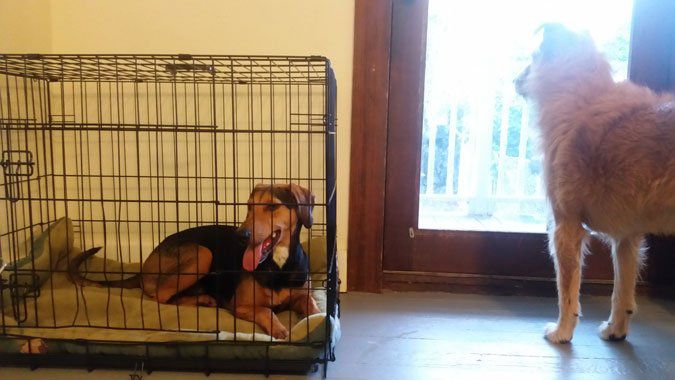 I’m fostering a one-year-old hound, Maebe, who has a minor amount of separation anxiety. The other day, I left her in a wire crate for about two hours in the house where I have my office. When I returned, I found that she had escaped from the crate and went on a bit of a rampage in the house. She went “counter-surfing” in the kitchen and ate the better part of a cube of butter and a few English muffins. She found a bag of treats on another counter and ate them, as well as half of the bag itself. She got into the trash in my office. She was on my desk – !!! – and knocked over my computer monitor!

In the past six weeks or so that I’ve had her, she hasn’t been this destructive, even when I’ve left her for longer periods. So, today, when I had to step out of the office for 15 minutes or so, I decided to set up the camera on my laptop to spy on the hound and see what she did while I was gone. I was curious: Would she be upset while I was gone? Frantic? And how did she get the door to the crate open?

I put Maebe in the crate, put a carabiner on the gate as a second level of defense, tossed her a handful of treats, and set up my laptop computer so that its camera was pointed at the crate, and set it to “record.” Otto was in the house, and I left him loose, as I always do. I walked out of the house, and took a short walk, rather than drive away.  As I walked away from the house, I saw a mailman approaching my neighbor’s house. I knew that Otto would likely bark a time or two when the mailman put mail in the mailbox, and I hesitated, thinking that perhaps I should wait until the mailman had passed already, so that Otto’s barking wouldn’t affect Maebe. But then the mailman stopped to sort through his bag, and, impatient, and with the camera running, I decided to just keep walking.

I was gone 15 minutes. When I walked back into the house, Otto was standing inside the door, as if he heard me approach the house and was ready to greet me. Maebe was in the crate and seemed calm.  I let Maebe out of the crate, stopped the recording on the laptop, and sat down to watch.

There were a few surprises!

Surprise # 1: Perhaps because I walked away from the house, and she didn’t hear my car start up and leave, Maebe was completely calm, not even arising from a “down” position, for a few minutes after I left.

#2: At the one-minute mark the mailman must have put the mail in my box (which is affixed to the wall next to the front door) and Otto leaped off the couch in my office, and ran to the front door, barking up a storm. That much, I expect; it’s his habit. The surprise here was how long and hard he barked. If I hadn’t known better, if I heard only the audio, I would have thought there was someone actually trying to break into my house. And he went on and on! My nearly perfect dog barked at the long-departed mailman with total ferocity for a minute and a half. AND, surprise #3: Maebe never got up during that time!! She was completely calm during Otto’s outburst!

Surprise #4: It wasn’t until the four-minute mark before Maebe got up and started inspecting the crate for weak spots. She stood up and pressed her nose to the ceiling, one wall and then the other, and the gate several times. She pawed at the bottom of the gate repeatedly and whined. Since she had escaped from the crate just two days earlier, I expected her to start trying to escape almost immediately after I left, and to be fairly upset. She seemed only mildly distressed.

At 5:46, she seems to give up on the tampering with the crate, and starts to howl in a disconsolate manner. And at 6:01, in Surprise #5, Otto joins in the howling! WHAT? I’ve never known him to howl before, but there it is on permanent record . . . and the duo went on and on, until 7:34. Then Maebe sits and listens until 8:07, when she goes back to pawing and even biting at the crate door. She alternates between sitting and whining and pawing at the door until 9:23, when she finally lays down again, albeit somewhat tensely.

At 10:07, Otto walks into the room, and in fact, stands in front of the camera, obscuring the view of Maebe. He alternates between looking out the front window, and staring into space, listening. He doesn’t pay one lick of attention to Maebe. At 12:00 he abruptly walks off camera, headed to the front door. Maebe, who at that point was lying down, sits up and fixes her gaze on the door. And for the next three-plus minutes my video looks like a still photograph, with Maebe sitting tense and still, listening intently to (surprise #6!) Otto whining in the front hallway! He whined and then I heard him give a little bark of excitement when I turned the key in the front door. Maebe sat like a statue until I walked in and turned off the camera.

So, while the exercise did, in fact, reveal that Maebe is mildly distressed by being home without humans, and that she doesn’t seem to get much (if any) comfort from the presence of another dog in the house, it revealed even more about my own dog! He is more stressed than I would have imagined about being left home with another dog. So, now I have more experiments  to do: Putting the camera on Maebe when she is left home with no other dogs in the house, and when I drive (rather than walk) away, and putting the camera on Otto when there are no other dogs in house, and when I drive away. I may have to set my laptop up to record every time I leave my office with any dogs in it, for any length of time!

Have you ever “spied on” your dogs when you weren’t home? Did you learn anything you didn’t expect?