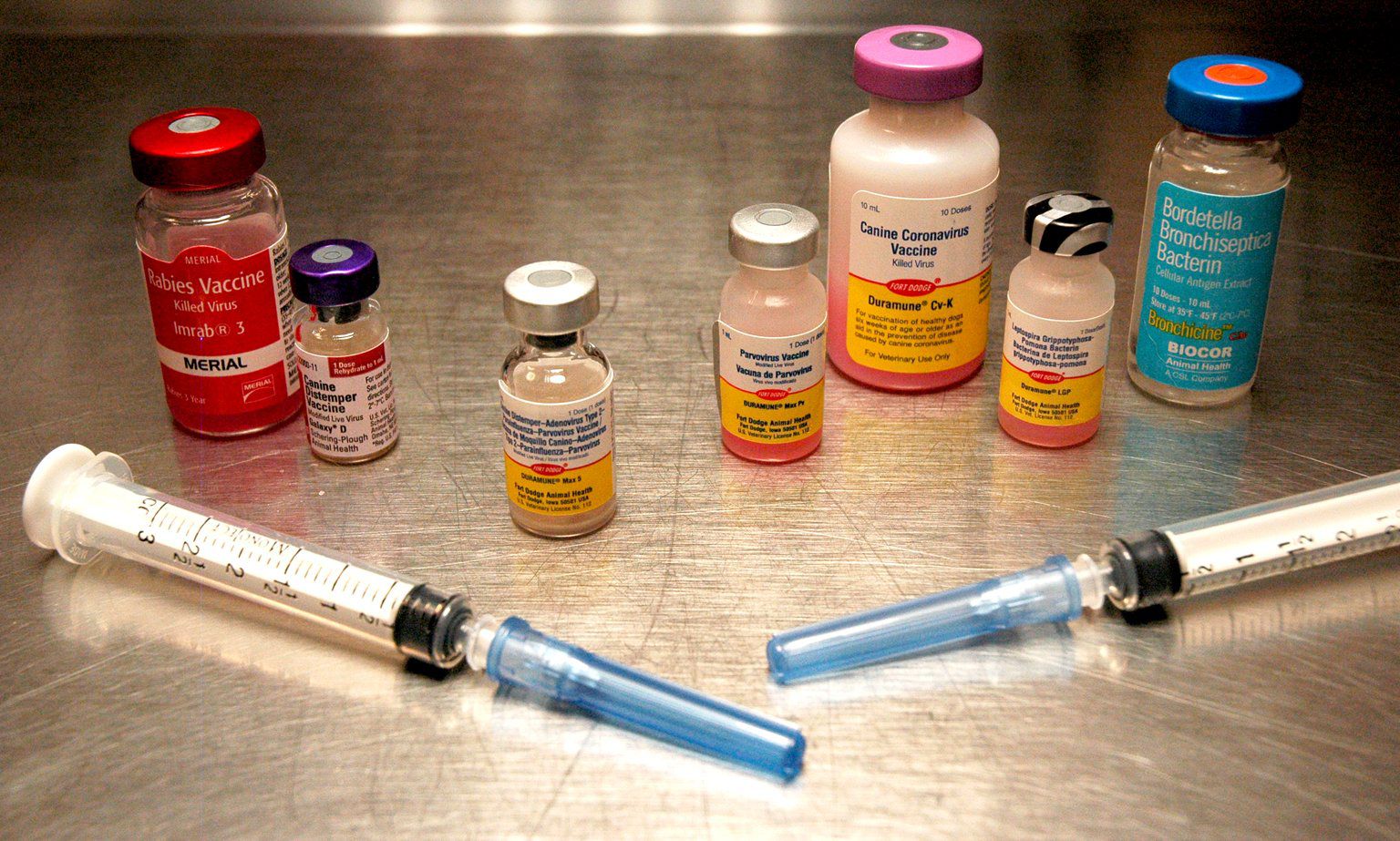 Last week, I wrote a long post about the fact that my dog Otto is getting older and the idea of vaccinating him for the fifth time with the legally required rabies vaccine makes me nervous.

I mentioned in that post that I would talk about the other core vaccines (distemper and parvovirus) at a later time; that time is now!

As I said in last week’s blog post, Otto was vaccinated a lot when he was brought to the shelter from which I later adopted him. He was brought into the shelter as a stray pup on May 7, 2008. He was estimated to be from four to six months old, and, like all shelter dogs, was vaccinated upon admission. He was given a five-way vaccination (distemper, adenovirus-type 2, coronavirus, parainfluenza, and parvovirus) and a separate three-way vaccination (adenovirus-type 2, parainfluenza, and bordetella) made by a different company.

On May 14, he was given a rabies vaccine.

Yes, that’s a fairly heavy-handed vaccination protocol – but not out of the ordinary for a puppy or young dog brought into a crowded open-admission shelter, particularly one that takes in dogs and puppies who actually have parvovirus (and, much less commonly, thank goodness, distemper).

Why would they vaccinate him so many times? Mostly, because of his age; adult dogs are likely to receive one, or at most, two multi-disease vaccinations. Puppies and young dogs of an uncertain age are given more. Blame it on their moms! (A little joke, there.)

I’ve explained maternal interference in past Whole Dog Journal articles. The shortest explanation: If a mother dog has been vaccinated (or was previously infected with and recovered from) a disease such as parvo or distemper, she will have antibodies to those diseases circulating in her bloodstream. When she has puppies, the antibodies find their way into her colostrum, the so-called “first milk” (which is not really milk) that her puppies will drink when they nurse for the first couple of days. Her antibodies will circulate in the puppies’ blood, protecting the pups from those diseases for a number of weeks.

How many weeks? It varies! The maternal antibody protection (also sometimes referred to as “passive immunity”) will depend on the mother’s antibody levels, the amount of colostrum she was able to produce, the amount of colostrum that any given puppy received, and the puppy’s own health and vitality. If the puppy is exposed to disease when the mother’s antibodies are still circulating in his body, the antibodies will recognize the disease antigen and neutralize it. Zap! Pow! Thanks, Mom!

But if the puppy is given a vaccine in the same time range, while the mother’s antibodies are still circulating, Zap! Pow! The mother’s antibodies in the puppy’s blood recognize the disease antigen in the vaccine – even if it’s a modified or “killed” antigen – and neutralize it, too. It’s as if the puppy was never vaccinated. As long as his mom’s antibodies are in circulation, his body won’t have a chance to respond by mounting his own immune response to the disease antigen in the vaccine.

But at some point, the mother’s love fades – er, I mean, the maternal antibodies “fade.” That’s the scientific phrase for slowly disappear, and when the maternal antibodies disappear, the puppy is vulnerable to disease – but his own immune system will be ready to respond to disease antigen by producing protective antibodies of his own. That exact moment is when we most want to give him a dose of disease antigen that had been designed to make the puppy’s body respond by making protective antibodies to that disease without actually having the ability to cause the disease – in other words, a vaccine.

Vaccines contain disease antigens that have been either weakened, killed, or modified in some way so it can’t actually reproduce and make the dog ill, but still resembles the disease antigen enough to inspire the dog to create antibodies that will recognize and neutralize any living, virulent disease antigen it encounters later in life.

The problem is, there isn’t any practical, cost-effective way to determine exactly when the mother’s antibodies had faded enough to leave the puppy vulnerable / ready to vaccinate; it can happen any time between five and 18 weeks!

The conventional answer to the problem has been to vaccinate the puppy every couple or few weeks in an effort to protect him as soon as possible after the maternal antibodies fade and before he might encounter real disease antigens. In a shelter environment, encountering real disease antigens is likely, so puppies are vaccinated way more frequently than we would suggest for a puppy who is safely sequestered at home.

So that’s why Otto was vaccinated four times for “core” diseases (parvo and distemper) at the shelter before I adopted him on June 16, 2008. He was young enough that they thought it was possible that he might still have circulating maternal antibodies.

In the past 10 years, though, he has not been vaccinated for those diseases… Not one “booster.”

(Is this a good time to mention that there is no such thing as a “booster”? When your dog – not mine! – is given a vaccine “booster,” he’s receiving the same vaccine in the same dosage that he was given the first or any other time.)

But I know that he’s protected from the diseases for which he was so generously vaccinated for disease, because in early 2010, I had a “vaccine titer test” for those diseases run, and the results were positive.

In a vaccine titer test, a lab tests a dog’s blood for circulating antibodies to the diseases of interest. In dogs, we are mostly interested in the three most deadly contagious diseases: parvovirus, distemper, and rabies.

When an adult dog (or a puppy whose mother’s immunity has faded) is vaccinated, his body should mount an immune response to the weakened, killed, or modified disease antigen, and begin producing specific antibodies to those diseases. A vaccine titer test looks for and quantifies the antibodies. When this technology was newer, there was a lot of research and inquiry about what levels of these disease antibodies should be considered “protective” and different immunology experts suggested different numbers. Today, any positive number is considered protective, because it demonstrates that the dog’s body recognized the disease antigen in question, and produced antibodies to the specific disease in response. The fact that the antibodies for a particular disease are present in any amount in the dog’s body means that his immune system will know what to do if it encounters that specific disease again.

Sometimes, over time, the level of these antibodies in the dog’s blood might get lower – or drop altogether to zero. As long as a previous test showed that the antibodies were there in the past, the dog is still very likely protected, thanks to his immune memory cells, whose job it is to just “remember” what to do in case of a new exposure to disease antigen: yell out to the immune system, “Quick! Get those antibodies back into production, STAT!”

Every veterinarian should know all this. Every veterinary assistant and registered veterinary technician should, too. But convincing them that your dog’s past positive vaccine titer test results mean he is still protected against disease is a long, hard battle in some cases.

When you do come across an educated vet or technician who logs your dog’s past positive vaccine titer test results into his chart with a look of recognition and understanding, it’s absolutely sublime. It happened to me once J

In most cases, when they are asking about your dog’s vaccination history, and you give them vaccine titer test results, they will look at you like you are insane, or stupid, or “one of those clients,” or all three.

In some cases, you might get a dubious look from a technician, and then a frankly hostile veterinarian who dives right into battle. “Have you ever seen a dog who is dying of distemper?” a veterinarian once asked me, by way of introduction. “I have, and it’s not pretty. I don’t know why you’d even mess around with something like this,” she told me. When I told the veterinarian that Otto had been well vaccinated in his first year, and that I had current, positive vaccine titer test results, she spent a good five minutes lecturing me about the fact that that scientists don’t even know antibody level should be considered protective, and that cell-mediated immunity (an immune response that does not involve antibodies) is poorly understood and not a sure thing. (Yeah, that was my last visit to that clinic. We were there, by the way, for help investigating Otto’s chronic springtime cough, not for an argument about vaccines!)

Again: It’s really not necessary to pay for a vaccine titer test to prove your dog’s level of protection, but it helps the educated people who are accustomed to asking about your dog’s vaccination history (trainers, groomers, boarding facility owners) feel better about your dog’s “overdue” vaccination status.

Last point: Just because I don’t want my dog OVERVACCINATED doesn’t mean I am anti-vaccination – far from it. I am grateful ­- that’s actually too weak of a word – for vaccination technology. I haveseen a dog dying of distemper, my own puppy, when I was a young child in the late 1960s and distemper vaccination was not yet a standard of practice. And I have cleaned up vomit and bloody diarrhea from shelter puppies dying of parvovirus, and held them as they were euthanized. Both events were traumatizing, knowing that a simple vaccine could have saved them. But that doesn’t have anything to do with blindly vaccinating dogs who are already protected from disease, just so someone can check off a box.