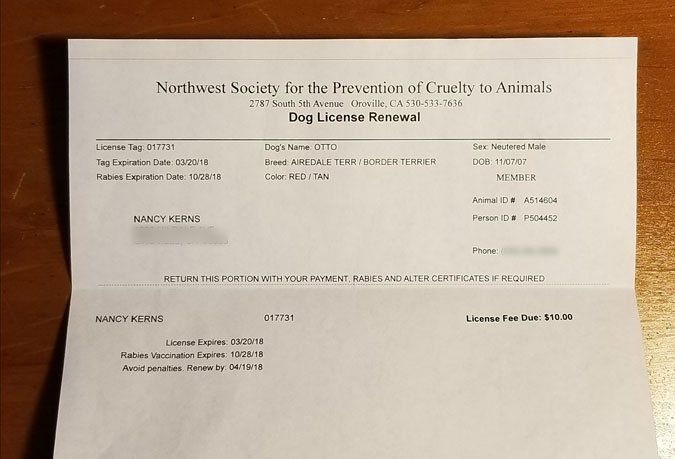 I adopted Otto on June 16, 2008. He was brought into the shelter as a stray dog on May 7, 2008. He was estimated to be about six months old, and was vaccinated that day with a five-way vaccination (distemper, adenovirus-type 2, coronavirus, parainfluenza, and parvovirus) and a separate three-way vaccination (adenovirus-type 2, parainfluenza, and bordetella) made by a different company.

Otto was vaccinated several more times with the five-way vaccines before I adopted him, but I’m not going to talk about those vaccines right now; I want to focus on the rabies vaccine – the only vaccine that dog owners are legally required to give their dogs in most states. Rabies vaccination earned this “special” legal status due to the historical threat that rabies poses to humans; as recently as my childhood in the 1960s, domestic dogs and cats were still common vectors for spreading this deadly disease to humans. Thanks to vaccination laws, this is no longer the case. Today, the most common vectors for rabies are bats, raccoons, and skunks.

In California, where I live, dogs are required to have their first rabies vaccination at the age of four months, their second no more than a year later, and additional rabies vaccinations every three years after that.

So far, I have complied with my state laws regarding rabies vaccination. Otto was vaccinated for rabies again on April 2, 2009, and again on March 20, 2012.

Why Should I Dread Another Rabies Vaccine for My Dog?

All vaccinations pose some risk, which must be weighed against their benefit. Since rabies is a fatal disease, is present in the United States, and carried by wild animals (bats, raccoons, and skunks are the most common vectors), and since we live in an area where all three of those vectors are present, I believe that immunization against rabies is a terrific idea. That said, it’s been demonstrated that dogs can be safely immunized against the disease with fewer vaccinations – and that the rabies vaccine can present serious adverse side effects in dogs.

It’s anecdotal, but in my own experience, senior dogs are more likely to suffer adverse effects from rabies vaccinations. My last senior dog, Rupert, had suffered from environmental and dietary allergies his whole life. In his later years, these were fairly well under control, with assiduous management of his diet. But he did have a massive allergy flare-up within a month of his last rabies shot, and getting the allergies under control again took a while. And I can’t tell you how many times I’ve heard friends and acquaintances say, “My senior dog was perfectly healthy until not long after his last rabies shot; he just sort of fell apart after that!” Maybe these were all coincidental; after all, statistically, senior dogs are at higher risk of all health problems. But the risk of these adverse effects is unwarranted in dogs who have already been immunized against the disease!

The Rabies Challenge Fund has been working for a decade to extend the legally required interval for rabies vaccinations to five and then seven years, in an effort to reduce the number of unnecessary vaccinations our dogs would be required to have over their lifetimes. (Note: If you are looking for a great charity to support, consider a donation to this non-profit; their work, which has been funded to date largely by breed clubs and individual dog owners, will benefit countless millions of dogs.)

On January 25, 2018, the Rabies Challenge Fund announced, “Results to date of the Rabies Challenge Fund research study showed protection from live rabies virus challenge five years after the dogs received two doses of rabies virus vaccine. Other data are still being collected and analyzed for the 6.5 and 7-year post-vaccination periods.” In other words, the Fund’s studies are proving what had been hypothesized: the rabies vaccines work for longer than their makers were willing to prove they work, so dogs don’t need to be given as many vaccines over their lifetimes in order to be protected against contracting the disease and/or infecting others.

It will take some time, however, for these promising results to be used to change state laws, to extend those vaccination requirements.

Currently, there is only one way to get a legal exemption from vaccinating your dog: to have a veterinarian help you apply for an exemption from your state or local animal control authorities. Each state has a different process (again, see the terrific resource, RabiesAware.org); in California, a veterinarian must submit an annual request for an exemption, and be able to verify and document that a rabies vaccination would endanger your dog’s life.

I know people who, unable to convince a veterinarian of the potential risk of a fifth, sixth, or even seventh rabies vaccination to their senior dogs have, instead, reported their dogs to their local animal control agencies as “deceased.”

Given Otto’s high-visibility job (modeling for both WDJ and its Instagram page), I’m not sure I could pull that one off. But I have until October 28 to figure out an alternative. (Although, because my city’s animal control department won’t issue Otto another license until his legal rabies vaccine period is longer than the licensing period, he is currently unlicensed. If he gets picked up as a stray or bites someone before all this is resolved, the fines will be much higher than they would be if he were currently licensed. Not that either of those things are going to happen, but still…)

I don’t want to sound like I’m being frivolous about a disease that can kill people. But again, the possibility that my four-times vaccinated dog could possibly get or transmit the virus is virtually zero – and the possibility that the vaccine could adversely affect him is far higher. I think four vaccines is sufficient, and I’m looking for a way to stay within the bounds of the law while avoiding any more vaccines.

Are you concerned about administering the rabies vaccine to your senior dog? Have you pursued a way to avoid this? Spill it in the comments, below!