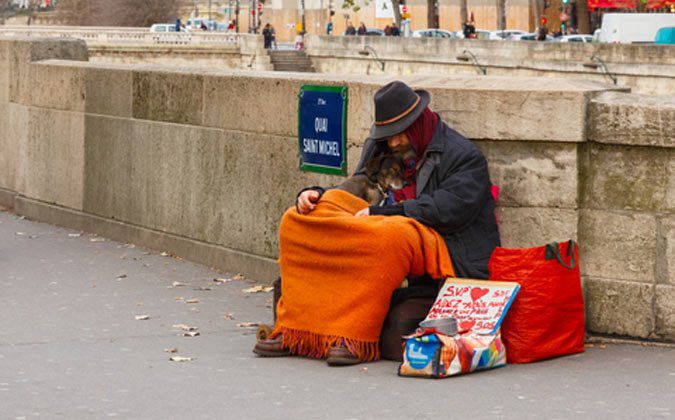 How do you feel about people who panhandle with a dog – or dogs, or a cat? I’m conflicted every time I see this.

On one hand, if I were ever homeless, you can be darn sure I’d have a dog with me. It seems like many dogs who live on the streets with their humans are some of the most unflappable, well-socialized dogs around. And I’d have to say that dogs who spend almost all of their time with their humans are likely to be far happier than well-fed dogs who sleep on cushy beds in climate-controlled homes but alone all day.

On the other hand, I worry that some people are using their pets as tools to elicit more sympathy, and thus more money, from passersby – that the pets are not truly loved or cared for, but simple tools for begging, and mistreated or neglected when their owners are not visible.

There is a man who is homeless in my town who can commonly be found “working” at the foot of the highway off-ramp on the main road through town. He’s almost always accompanied by two large pit bull-mix dogs – except when he goes on a drinking binge, passes out in a public place, and is picked up by paramedics. When this happens, the dogs are taken by animal control officers or police (who know the dogs by name) to the local shelter. The dogs have spent so much time at the shelter that they are perfectly comfortable resting there until their owner gets out of the hospital, returns to the highway off-ramp, and raises money to pay the shelter’s fees.

Sometimes this takes a matter of hours, but sometimes it takes him weeks to return. In the meantime, at least, the dogs are well fed and safe, and have (over many visits) received vaccinations, deworming, flea prevention, and treatment for wounds. Shelter staffers can’t be blamed for being annoyed that the owner’s “Need $$ to get my dogs out of jail” sign is one of his most successful fund-raising campaigns – and that the shelter has received calls from people who have seen the guy and his sign and who are calling to scold the shelter for keeping the dogs “from” their owner.

I have to admit that seeing this guy’s dogs in the shelter so many times has hardened my heart a bit to seeing people with pets asking for money. But neither do I like my instinctive negative reaction.

Are you more likely to give money to panhandlers with pets?