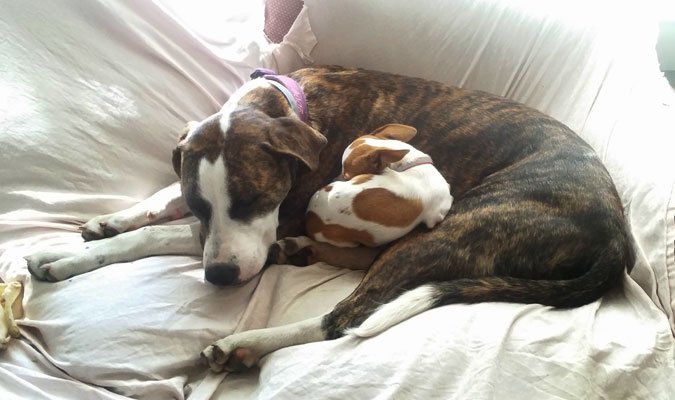 I’m incredibly lucky, because my 10-month-old pit bull-mix, Woody, has a special friend, one who is almost exactly the same age. Samson belongs to one of my best friends, so our pups get to play together and walk together when my friend and I get together to walk or talk. We took our youngsters to puppy kindergarten 1 and 2 together, and this weekend, we will be taking them together on a walk that raises money for a local shelter.

The funny thing about the relationship between our two adolescent dogs? How unlikely it is, given that Woody weighs about 60 pounds, and Samson just barely tips the scales at four pounds, after he’s eaten breakfast and before he goes out to poop!

At the request of my local shelter, I fostered Woody, his seven sisters and one brother, starting when they were about three or four weeks old, and ended up falling in love with and keeping Woody, the largest pup in his litter. At exactly the same time, my friend was fostering Samson and his five brothers for the same shelter. She ended up falling in love with and keeping tiny Samson, who was the smallest pup in his litter! Because the pups have been seeing and spending time with each other on a regular basis since they were very young, they have developed into the best of friends.

I was also fostering a young adult American Black and Tan Coonhound named Maebe when Woody was just a little more than a month old, and she was the most amazing “teenaged babysitter” for, initially, his whole litter, and later, when the rest of the puppies got adopted, just for him. She played with Woody day in and day out, and it was a sight to see. Their play was raucous, and energetic, involving wrestling and face-biting and tug o’war – and yet, she never made the much smaller puppy squeal in pain or fear. She was wild yet gentle, patient yet firm. He learned such great things from her before she was adopted!

I fostered several consecutive litters of puppies after Woody’s litter, so, for a few months, he also had the continuous opportunity to play with pups who were much younger and smaller than himself. He had to be supervised, of course, and I had to separate him frequently when he started to play a little too roughly with the puppies, but that experience (as well as the time he spent with Maebe) seemed to teach him everything he needed to know about playing with his tiny buddy, Samson.

Today, Woody almost always immediately throws himself onto the ground when he sees Samson; it’s both an invitation to play and a necessity for play, as he really can’t play chase games with Samson without hurting the little guy.

The two young dogs will roll around and wrestle together, with Samson leaping all over Woody, diving under his head and neck, and biting his lips and ears. Woody tolerates almost all of this, only occasionally flattening Samson with a long leg and a heavy paw, pinning him to the ground when he is behaving too much like a rabid weasel. Then they will often chew a bone or rawhide together, before curling up together for a nap. Woody is incredibly gentle with Samson – a point that one can most appreciate when you see him playing with an adult dog or another large adolescent; he can (and likes to) play super rough when he has a play partner who will indulge in that sort of thing.

I’m so glad Samson can come over at least once a week or so for a few hours of play. I hope they will be friends long after their interest in puppy play is over.

Does your dog have a good buddy with a compatible play style?