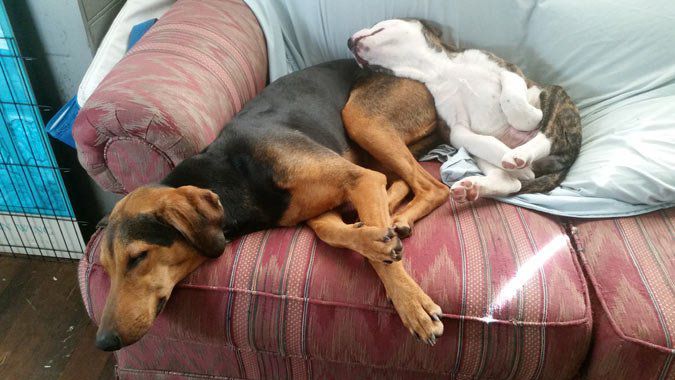 None of you actually had any money riding on the question of whether I was going to keep him or not, did you? I hope not.

Yes, I am keeping the puppy, the one I fell in love with from the litter I fostered for my shelter. One of these days, I’m going to go back through all my files and do the math, but I think that if I added up all the dogs I’ve fostered for one shelter or rescue of another in the past 20 years, the total would come to more than 25, and this is the first one I’ve “failed” at fostering. At least, so far. I am still not discounting the idea that, if it turns out that this puppy turns out to be the ideal dog for an ideal family sometime down the road, I could, theoretically, still turn him over to a perfect life elsewhere. Who knows? Maybe he will turn out to be a great service dog or therapy dog, as some of you have suggested. He does have the calmest, most centered personality I’ve ever seen in such a young dog.

And his name is Woody. I wanted a nice, friendly name – even though half of my friends were proposing names based on his size and promise of future bulk, names like Thor and Hercules and Max. My husband usually names all of our pets, and he admired the wood-grained look of the pup, apparently unaware that the brindle coat color is generally just called brindle. It’s never been my favorite coat color, but now that I look at it like wood-grain, I like it. I like everything about this pup so far.

For example, I taught him (within minutes) to put his front feet up on a stool. He decided to go one step further and get up onto the stool, and then sit down on it (sitting is still his very favorite behavior). I thought it was just too cute, and rewarded him richly. The next day, I was working at my computer and suddenly thought that thought you don’t want to have when you have a puppy: “It’s too quiet! Where is the puppy?!” I started to jump up from my chair, and as I did, I looked into the next room – where Woody was sitting comfortably on his little step stool, waiting for me to notice and reward him. Goodness knows how long he had been sitting there, but he got rewarded with treats and an abundance of kisses. He climbs up there all the time now, just to hang out, but he’s not going to fit on the stool much longer, the way he’s growing. I’ve ordered a K9 Kore Balance Disk and Base from TotoFit (totofit.com) for his next “station.”

My good friend Leonora, who was fostering a litter of six tiny puppies (the ones I had for just the Christmas week in addition to the litter of nine I was fostering), has also “failed” at fostering. She kept the smallest of her litter, and she did give him a big, tough name, Samson! We’re both signed up for a puppy kindergarten class with my favorite local trainer, Sarah Richardson of The Canine Connection, starting this week, and we’ll take the puppies to Sarah’s puppy socials, too.

I haven’t owned a young puppy since I was a kid (and didn’t really own the ones my parents kept). As an adult, the youngest dog I’ve owned was my Border Collie, Rupert, bought by my then-boyfriend when the pup was about four months old – and that was years before I knew anything about dogs, years before WDJ. This is my first opportunity to own a dog from as early as possible, and I could not be more excited.

Otto is still not excited, but he knows that where there are untrained puppies, there are more treats and more exercise than usual, so he’s getting on board, slowly. He gets extra compensatory love, too, and I’m taking pains to crate Woody enough so that Otto gets plenty of alone-time. And, fortunately, I am still fostering Maebe the Black and Tan Coonhound, who is absolutely the best puppy-sitter ever. She plays and plays with Woody, helping get him good and tired. Most of the pictures I  have been taking of him have Maebe in them; they are just too cute together.