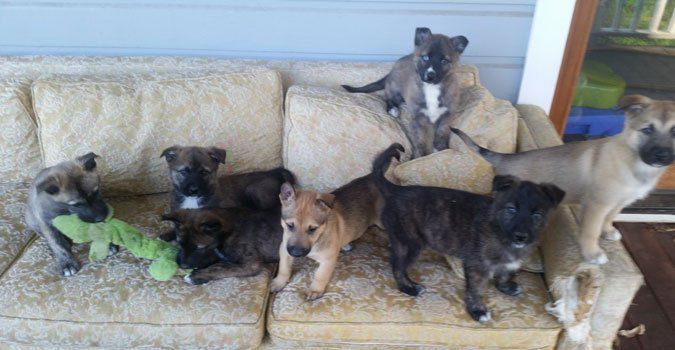 Last summer I fostered a really disparate-looking litter of puppies for my local shelter. Most of the time, whether they are brought in as purportedly “found” puppies or their owners admit that they were accidental and unwanted, the litters of puppies that come to the shelter are fairly uniform, like the litter of 11 Great Dane pups I fostered immediately after the dissimilar group (there were 10 black and white pups, and one fawn-colored one, who nevertheless was the exact same shape and size as his siblings). But this one litter looked like they were from three different families!

As a side note, I should mention a fact that surprised many of my friends and family members, but isn’t news to experienced dog owners: puppies from the same litter can have different fathers. Each of the mother’s egg cells need to be fertilized by individual sperm cells, and if the mother has been bred by a number of males, the eggs can be fertilized by sperm of different males. When the owners of intact females fail to keep them safely separated or sequestered, and they escape and run loose, or loose, intact males are drawn from all over the neighborhood to them, anything can happen!

So, the odds are good that the pups who looked so different from each other were sired by at least two different dads – at the time that I was caring for them, I thought maybe even three or four fathers!

There were seven pups. Three looked pretty similar to each other, sort of like hound/German Shepherd-mixes, with short, reddish/tan coats with darker “saddles” on their backs.

Two others had short, black coats, with brown spots over their eyes and on their legs; they looked like Rottweiler-mixes.

One puppy had a very fluffy, long coat, but the color was similar to the hound/shepherd-looking pups.

And the last puppy was also quite fluffy/long-haired, but had a dark sort of black/dark-grey outer coat, and a lighter undercoat. She also had a naturally bobbed tail!

As it turns out, I know where four of the seven pups landed, and recently saw the bob-tailed pup in person. I am friends on Facebook with the owner of the other long-haired pup, and have seen photos of her more or less weekly since her adoption. When I saw the bob-tailed pup -well, now she’s an adolescent dog – I was temporarily confused. Her color has lightened and gotten much more red, and she looks super similar to her long-haired sister! When they were pups, I would have sworn they were sired by different dogs, but now – except for the bobbed tail – they absolutely look like full siblings. Genetics are so strange!

I was thinking about this because I’m currently fostering ANOTHER litter of seven mixed-breed puppies for my shelter. I don’t know WHAT they are, just that their cage-card read, “Mother, Husky-mix, DOA.” They definitely look related, but there are some striking differences among them. I think when these ones are ready to be adopted, I’m going to send along postcards asking the adoptive owners to keep in touch somehow, on Facebook or via email; I’d really love to see what they all look like, and I’m insatiably curious whether they will look similar or different as they mature.

This is absolutely not a knock on purebred dogs, but it occurred to me today, as I was kissing all these unique faces, that it might be boring when the pups all look very similar!