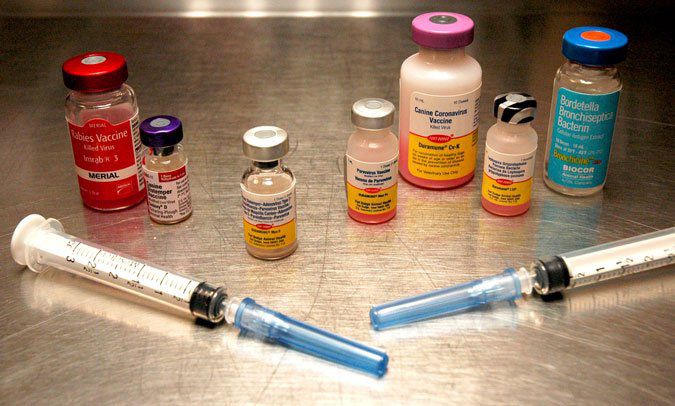 My husband and I were talking about childhood dogs for some reason, and he said, “We got a dog when I was little and it died of distemper, and my parents said, ‘That’s it, no more dogs.'”

When he said that, I suddenly remembered that my family, too, had lost a young dog to distemper when I was a child.  I have a solid memory of my mother wiping up vomit, and the adolescent pup lying limply nearby, and my mother telling me, “I don’t think she’s going to make it.” I was probably about four or five years old, but I knew that this phrase meant the dog was probably going to die.

That memory compelled me to go look up the history of the canine distemper vaccine. Was it not available to the average dog owner in the mid to late 1960s? Or were our parents just irresponsible? Or what?

It turns out that both explanations were probable. The canine distemper vaccine became widely available only in the late 1960s – and neither my husband’s parents nor my own were particularly knowledgeable pet owners. It’s likely that the vaccine was something that was only newly available to pet owners, and not yet part of what every puppy from a responsible breeder or in a shelter received.

While some veterinarians still take a “wrap puppies in cotton wool” approach, advising owners to keep puppies sequestered at home until they are fully immunized – in order to prevent them from contracting any infectious disease – many others now consider puppies to be at a higher risk of developing social/behavioral disorders if they are prevented from socializing as puppies. Vaccination rates are so high today, that the deadliest canine infectious diseases are rare enough that taking pups into most environments is far safer than it was when I was a child.

Note that I said safer – not perfectly safe. Vaccination rates will never be 100 percent, and there are wildlife vectors that can bring diseases like distemper (and rabies) back into even very urban environments and set off waves of disease infection in areas where vaccination rates are low.

Today (here in the U.S., anyway), with effective vaccines being not just widely available, but also relatively inexpensive, I just can’t wrap my head around the idea of a highly contagious, highly lethal disease being so common that practically everyone who had a dog had heard of it, and knew someone whose dog died of it. I’m so grateful to have these lifesaving tools available, and I don’t take them for granted.

By the way, in the process of investigating the distemper vaccine, I came across a fascinating article about the race to develop the vaccine: “‘Saving the lives of our dogs’: The development of canine distemper vaccine in interwar Britain.” If you like dogs (and I don’t think you’d be reading this if you didn’t) and you like science-writing, you’ll enjoy this account of how competing scientists fought for understanding, funding and acclaim as they worked to defeat this terrible disease.