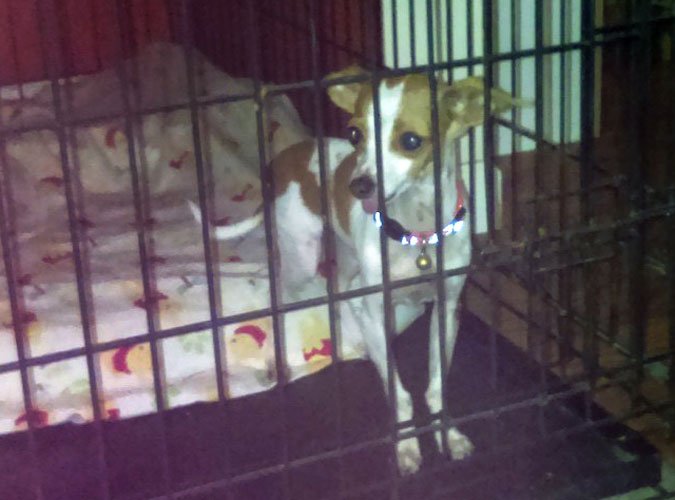 Back in June I wrote a blog post about how many ways I screwed up when having to medicate more than a dozen dogs at the same time (https://www.whole-dog-journal.com/blog/Problems-with-Pills-for-Dogs-21494-1.html). Some of you generously offered your own mistakes and tips for preventing them.

One of the things I goofed on was giving one dog her pills in the presence of another dog. I was dog-sitting my friend’s two Chihuahuas: 10-pound S’Mores, who needs blood pressure medication and a diuretic, and Samson, who weighed less than four pounds and was about six months old at the time. S’Mores spit out one of her pills, and Samson dived for it, swallowing it faster than I could grab him.

I had to call their veterinarian – who is also MY veterinarian – and confess to my mistake, and ask if there was something I should do; make Samson vomit, perhaps?

Thank goodness, the vet thought the dose was low enough that the one pill wouldn’t cause Samson any harm. But I started using a baby gate to make sure that only the dog who was supposed to receive the pill was in the room, until it was clear the pill had gone down the chute, so to speak.

I also confessed my error to my friend. She told me that it was indeed a challenge at her house, because she also has a third dog, Lena, who receives a strong pain medication each day, and who is a master at spitting pills out.

My friend knows her dogs well, and is careful, but she wasn’t using the “baby gate” technique I used after my mishap – though she is now.

Last Saturday morning, she was giving her two elderly dogs their meds, when 75-pound Lena spit out her Tramadol pill, and four-pound Samson dived for it and gobbled it down. My friend said she couldn’t believe how fast he was. Just as quickly, she called our local emergency veterinary clinic, and asked what she should do. The receptionist asked what the medicine was, what the dose was, and how much Samson weighs, and put her on hold for a minute. Then she came back and said that the veterinarian on call said she should bring Samson in, immediately. Mind you, the emergency clinic is a good 30 minutes away. And the closest clinic wouldn’t open for another 30 minutes.

After my mishap just days before with Woody (who swallowed a too-small ball), my friend had just bought a new bottle of hydrogen peroxide to keep on hand for emergencies like this. She asked the ER receptionist, “Should I make him vomit up the pill first? I have hydrogen peroxide.” But the receptionist told her no, she should just bring Samson to the vet, fast.

My friend called me on speaker as she was hurriedly dressing, telling me all that had transpired. I jumped on my laptop and started Googling; was there a reason she shouldn’t make Samson vomit up a Tramadol pill? I was aware that there are certain things that you should not make a dog vomit – anything caustic, for example, or petroleum-based substances. I couldn’t find any reason that vomiting up the medication would be contraindicated, but neither I nor Google are veterinarians, so…

She drove Samson to the local vet, arriving a few minutes before they opened, and started banging on the door. Thankfully, they opened the door and the vet saw Samson before he had a chance to put on his white coat. He asked, “Did you make him vomit?” She said, “No! The emergency clinic told me not to!”

He said, “Well, that’s what we are going to do!” He whisked Samson into the back, and gave him an oral dose of hydrogen peroxide – not the injectable morphine-based medication that the ER gave Woody days before, to make him vomit up the ball. Within minutes, Samson vomited up the medication, but given the time elapsed (about 40 minutes at that point), the pill was dissolved. Given the high dosage of the pill, the veterinarian also recommended giving Samson some activated charcoal, to help absorb the medication and prevent it from being absorbed in his bloodstream, and subcutaneous fluids, to help dilute the effects of the medication and push it through his excretory system as quickly as possible (pee it out).

$56 office visit. $25 for inducing vomiting. $15 for charcoal. $25 for the fluids. A bargain, compared to Woody’s visit for (sort of) the same thing (throw up what you shouldn’t have swallowed!).

My friend was annoyed with herself (as I was with myself, days earlier!) for failing to control the situation – and for not yet pulling the trigger on veterinary insurance for Samson. She and her husband had been discussing the cost just that morning, and the event stiffened her resolve to fit it into their budget. 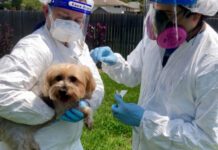 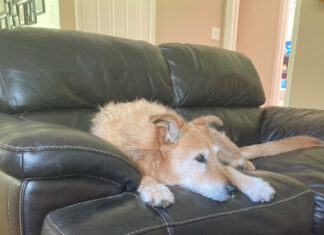 Nancy Kerns
37
My stepdaughter and her son are coming to town for a visit. Hurray for vaccinations! They live in New Jersey, and haven’t...