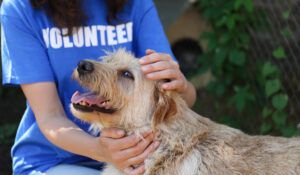 Many of us animal lovers contribute in some way to animal charities. I donate (admittedly) small amounts of money to my local animal disaster relief organization (the North Valley Animal Disaster Group, which rescues animals from floods and fires and operates emergency shelters for animals who are displaced from these disasters) and to my local animal shelter, the Northwest SPCA. I’m able to contribute more as a volunteer than as a donor, I think – though I do end up spending a not-insignificant amount of money on dog food, toys, chews, and other equipment for the litters of puppies and the occasional adolescent dog that I foster for the shelter.

I also help my local shelter by editing and laying out their newsletter, which they mail out at least once a year (sometimes more). In the newsletters are stories about the shelter’s major accomplishments in the previous year and some of the animals they have helped, as well as requests for donations, both monetary and in the form of dog and cat food, kitty litter, used towels and blankets, and so on. The newsletter gets mailed to all of the shelter’s past donors and to everyone who has ever adopted an animal from the shelter (at least, for those whose addresses are still valid); the response to the newsletter and the self-addressed, stamped envelope tucked inside it is one of the shelter’s most important fund-raising tools.

But not everyone has the time or space or dog-care and -training experience to raise litters of puppies or improve the behavior of an energetic young dog who has never learned to live politely with humans – or to edit newsletters, for that matter. For many people, making a financial contribution to an animal-related charity is a more practical way to make a difference to those charities, and thus, to needy animals somewhere. (And even if everyone had the time to volunteer, animal charities would still need financial donations!)

If you’re interested in making a year-end contribution to an animal-related group, please click this link, which leads to an article we published in the December 2012 issue of WDJ. “Giving to Animal Charities” offers the best information I’ve ever seen about how to make sure your donation dollars are being spent in a manner that will achieve your charitable goals. Do you want your money to help tighten national or state laws about animal cruelty and abuse? Provide animal disaster relief? Support spay/neuter programs? Operate local shelters? Author Barbara Dobbins explains how to determine what your intended charity actually does with contributions; it’s not always what you think it is.

And, if I may, I’d like to share with you the most memorable thing I ever learned in college. In September 1985, there was a massive earthquake centered in Mexico City that caused billions of dollars worth of damage and killed thousands of people. One of my professors was collecting contributions to a disaster-relief organization and he made a short speech about this before our class began. He said, “I know many of you are financially challenged. College is expensive, and many of you work in addition to going to school. But if you have bought a cup of coffee even once this month, you could afford to donate a dollar – and if every one of my students this week did that, we’d collectively be sending more than $1,000 to help people whose homes and livelihoods have been completely destroyed.”

He went on: “I’m putting a donation box in the department office; I won’t know if you make a donation or not. And if you can’t, you can’t. But here is something I have learned: There are always reasons why we don’t feel we have enough money to make charitable contributions. Right now, it’s the cost of your education. When you graduate, you’ll be broke for a while as you get on your feet in a career. Next, you might have a wedding to pay for, or a mortgage, or just car payments that are tough to make. Pretty soon, it might be your own kids you have to help through college. If you don’t get into the habit of helping NOW – even just the tiniest amount – you may grow up to be one of those people who never does help. And that would be sad!”

I’ve thought about that speech many, many times since then. And if San Francisco State University professor Max Kirkeberg is still alive, I’d love for him to know that his speech made a lifelong giver out of me. Even if it’s just a dollar!