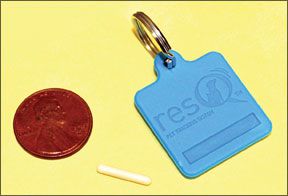 Late last week I read a news story about a dog who was lost for more than six months – and then found on the streets of Salinas, California, more than 1,200 miles from his home in Boulder, Colorado. He never would have been identified and returned to his owner if not for his identification microchip. It’s the kind of story that warms the heart of every shelter worker and volunteer, and highlights the value of the tiny implanted chips.

But one fact in the story was alarming: When the shelter staff scanned the seven-year-old dog, found the microchip, and looked up the chip’s registration information, they found several phone numbers for the dog’s owner – none of which were working numbers for that person. Folks, you have to make sure that any phone number you use for registering your dog’s microchip is current!

Fortunately, the shelter then sent a certified letter to the address they found on file for the owner. Nine days later, the owner received and opened the letter, and joyfully called the shelter to identify and claim her dog. It was a close call, because the shelter’s policy was to wait 10 days after sending such a letter before making the dog available for adoption. A day longer, and the dog could have been living in someone else’s home, instead of flying back to Colorado on a flight donated by Frontier Airlines – hey, kudos to you, Frontier!

If you know where your dog was originally implanted with a microchip (shelter or vet clinic), contact them and ask about the registry for the chips they use.  Follow up with the registry.

Or, call your vet and/or local shelter, and ask if they have a scanner you can use to scan your dog’s microchip. My veterinarian has a scanner in the lobby, enabling clients to scan their own dogs and confirm the registration number. Ask the vet or shelter staff for help in identifying the maker of the chip, and tracking down its registration. Then follow up with the registry.

For more information about microchip registration, and the best way to make sure your dog’s chip can lead as directly as possible to you, see the following article from WDJ’s November 2009 issue: https://www.whole-dog-journal.com/issues/12_11/features/Canine-Health-News-November_16173-1.html