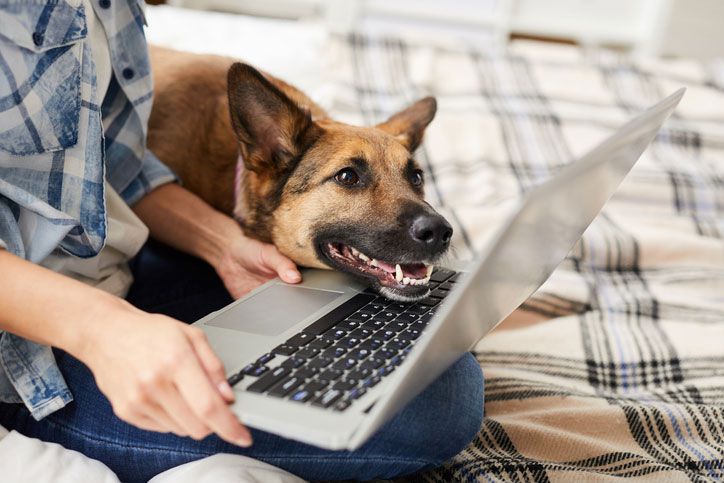 It’s probably self-evident that most writers and editors enjoy reading. We read professionally, and also for fun.

Lately, though, my reading has been getting in the way of writing! There has been an absolute plethora of fantastic articles about dogs in the past few weeks, and just today, I got a message from my browser indicating that it was going slow due to the sheer number of open tabs. I often leave articles open on the screen, so when I have a few spare minutes, I can click on one and read something great and not lose it. But there were just too many open and unread! So I had an idea: I can share some of the reading that has been tempting and then fascinating me with you! And hopefully get to the end of some of these pieces!

Well, I loved this one – by a writer I hugely admire on a site that consistently presents great writing on veterinary topics – but also because I was happy to read about veterinarians who agree with WDJ’s long-standing advice to rotate diets, and not just feed the same food (or even different products from the same company) year after year. I didn’t agree with every point in the piece, but I was just happy to see the concept of changing foods to try to hedge one’s bets, nutritionally speaking, that, over time, one’s dog will get everything he needs, and not too much of other nutrients.

One fact about “complete and balanced diets” that rarely gets pointed out: The nutrient levels in foods that meet the standards required in order to make the “complete and balanced” claim are NOT ALL THE SAME. There is tremendous variation in the amount of vitamins and minerals, as well as the macronutrients (protein, fat, and fiber) found in dog foods. A product’s qualification as “complete and balanced” in no way guarantees that it will be an appropriate diet for every dog for the dog’s entire lifetime.

This is interesting, and something that few of us consider in the U.S. and Canada (where the bulk of our subscribers live). Our rabies vaccination rates are so high, that canine rabies is considered eradicated. The phrase “eradicated” is sort of a misnomer, however, because rabies is still common in wildlife, including bats, raccoons, skunks, and foxes, and if an unvaccinated dog is bitten by a rabid wild animal and goes untreated, he absolutely will develop rabies and die. What they mean in the article by “eradicated” is that the strain of rabies most commonly seen in dogs is eradicated in the U.S., but any strain of rabies (such as the strains most commonly seen in bats or skunks) can infect and kill any other species of mammal.

Anyway, in this country, we regard rabies as an uncommon, even rare, threat presented by wildlife. But in other parts of the world, dogs themselves are the carriers (and of course victims), and startling numbers of human deaths are directly attributable to bites from rabid dogs.

Just for fun, here is another link, from the Centers for Disease Control, about the rabies threat from wildlife in the U.S.

One of our long-time contributors, Barbara Dobbins, has been writing a series of long, in-depth articles about the most common canine cancers. I can’t wait to hear what she has to say about this one. Really interesting stuff. Kind of above my pay grade, but fascinating.

This author has some fascinating observations to make about the FDA’s news releases about canine dilated cardiomyopathy and diet. In my opinion, he’s not right about everything, and he admits that he has a particular bias regarding the topic (he makes and sells a pea-heavy, grain-free line of dog foods, and has published a book bashing the pet food industry.) But he raises some very good points – in particular, #6, #7, and #9. See what you think.

You may need a free account to view the next article, but I wanted to share it anyway:

“Why Are There So Many Books About Dogs?”

A question I have asked myself many times! Here, the mystery is addressed by canine cognition researchers Vanessa Woods and Brian Hare (themselves the authors of the book, The Genius of Dogs). It’s a soft piece that basically just celebrates our modern closeness to and love and appreciation of dogs. Nice.

There are more tabs, but I think you get the idea. I feel very lucky, to be living in the  era so well described by Woods and Hare, when there is so much good information about writing about dogs out there for the reading.