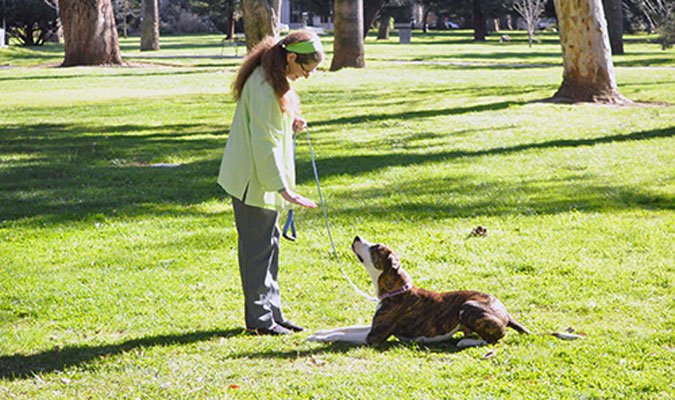 I was originally introduced to Pat Miller via email and then phone. At the time, I was working on a publication called the Whole Horse Journal, and she was one of the contributors to that publication. She was a good writer and contributed a few articles with terrific horse-friendly training tips.

Later, the publisher of that publication asked me to edit a start-up sister publication, to be called the Whole Dog Journal, modeled on the Whole Horse Journal. I knew far more about horses than dogs in those days, but I was game to learn, and I happily accepted the gig.

As I was rounding up writers and experts to contribute to the new publication, the editor of the Whole Horse Journal mentioned that Pat Miller would be a great resource for articles on training dogs, too. “Oh?” I remember asking. “I didn’t know that. Thanks!” I contacted Pat by phone and was pleased to learn that, in fact, she had an even more extensive background and training in dog behavior than horse training! She began contributing articles to WDJ – and has been ever since. She helped me develop WDJ’s dog-friendly ethos and mission statement, and routinely provides expert guidance and direction toward the most effective, humane dog training techniques and tools available.  We’ve worked together by phone and email for some 20 years now – throughout her residencies in California, Tennessee, and most recently in Maryland.

So it may be surprising to learn that we’ve met in person only a few times – once in California for a photo shoot, a few times at dog training conferences around the country (always with us too busy to actually spend more than a meal or two together), once for an all-too-brief visit at her farm/training center in Maryland, and once for less than an hour as she drove through northern California on her way from a speaking engagement to visit her brother, who lives in the top left-hand corner of California. When I heard, a few months ago, that she was going to be presenting at a conference in Sacramento – only an hour from me – and was again going to drive to see her brother, I offered to drive her from there to there, so we could hang out, do some planning for WDJ, and maybe take some photos for some upcoming articles.

The funny thing is, though we’ve worked together for more than 20 years, there were tons of things we didn’t know about each other that we learned in the 20 or so hours that we spent together in the car! Reaching the top-left corner of the state takes a good long while, and even longer when literally all the roads that go there are sliding down the mountainsides they traverse. We took one route there, and another back the next day, got out of the car and stretched during road-construction delays, and took more than a few snack and pee-breaks.

We were accompanied by my adolescent dog, Woody, whom I don’t like to leave at home when I can help it, as I always seem to come back to some new woody damage – a new spot on the deck or fence chewed, or the bamboo hedge with a new tunnel chewed through – and besides, he could be our photo model! Woody spent a significant amount of time with his chin on Pat’s shoulder as we drove, so I think she ended up liking him okay. (I wish I got a picture of that, but I was driving!)

At the end of our trip, I joined Pat after her presentation at the conference so we could take some training photos for articles. And it was during that brief photo shoot that I received my most recent pearl of Pat’s wisdom.

We were in a busy park in downtown Sacramento. I had brought both Woody and Muppet, a foster dog; at this moment, we had Woody on leash and Muppet was in my car, parked close by in the shade. We paused for a minute to allow a person with two large dogs on leash to walk by. Both of the dogs were growling and barking and pulling toward Woody, and he started growling and reacting to the dogs.

Now, I’ve worked with Woody a LOT on reducing his reactivity to the sight of strange dogs and people, and he’s come a long, long way. If he spots someone (dogs or people or both) that he regards as “strange,” he will usually emit a small growl; that’s my cue to pay attention and manage the situation BEFORE it’s a situation. In the beginning, I would just counter-condition like mad from a safe and sane distance (doing a quick U-turn and exuberant trot off into the opposite direction if need be), and then delivering treats to him in a rapid-fire fashion. The goal is to change how Woody FEELS about seeing strange dogs or people by making it RAIN treats whenever he sees said strange people or dogs; a secondary goal is to get him to look to me when he sees something alarming, so I can give him direction and reassurance that all is well.

In the early days of our counter-conditioning sessions, I wasn’t looking for any particular behavior from Woody; the point of counter-conditioning is not to (immediately) change the dog’s behavior, but to change his emotional response from a negative one to a positive one. Once he’s been conditioned to feel happy about the sight of “strange” people or dogs, as evidenced by a quick look at his handler with what Pat calls the “Where’s my treat?!” look, changing his behavioral response becomes easy and not so highly charged. In recent months, Woody has improved to the point where I can give the cue “Off!” and he will instantly and happily look away from whatever it is that has him spooked and look at me for the treats.

So there we were: The person struggling with her growling, reactive dogs about 30 feet away; Woody starting to put his hair up and growling, too; Pat with Woody’s leash in her hands; and me with a treat pouch and treats in one hand, camera in another. I did what I have been doing lately with Woody: I said “Off!” and was waiting for him to look away from the dogs and toward me. But he was still growling and fixating on the dogs (who were being dragged away by their person).

But Pat, with a world of experience that I don’t have, quickly interrupted, “But he’s NOT!”  – meaning, no matter what my expectations were of Woody, he was NOT in fact doing what I thought he should do or could do, so I should train the dog in front of me, not some ideal version of him, and deal with what was actually happening at that moment!

Two decades working together, and two days in a car talking together, fortunately, speeds up one’s comprehension. Pat’s pointing it out made me immediately see my mistake, and I instantly understood that the circumstances – days in a car, busy park in a new place, being handled by a new person, close proximity to some scary, nearly out-of-control dogs – added up to a situation that Woody just couldn’t “look away” from at that moment. I was asking too much, and setting him up to fail. More treats! Duh! When in doubt, go back a level (or more) to where your dog is able to succeed! I did, and the moment passed.

Such a small thing, and yet it rocked my world. It reminded me that any time you are expecting a dog to do something that he’s showing you he’s not capable of in that moment, you are setting him (and yourself) up for failure and frustration. And that’s what working – for even a short moment – with a master will do.