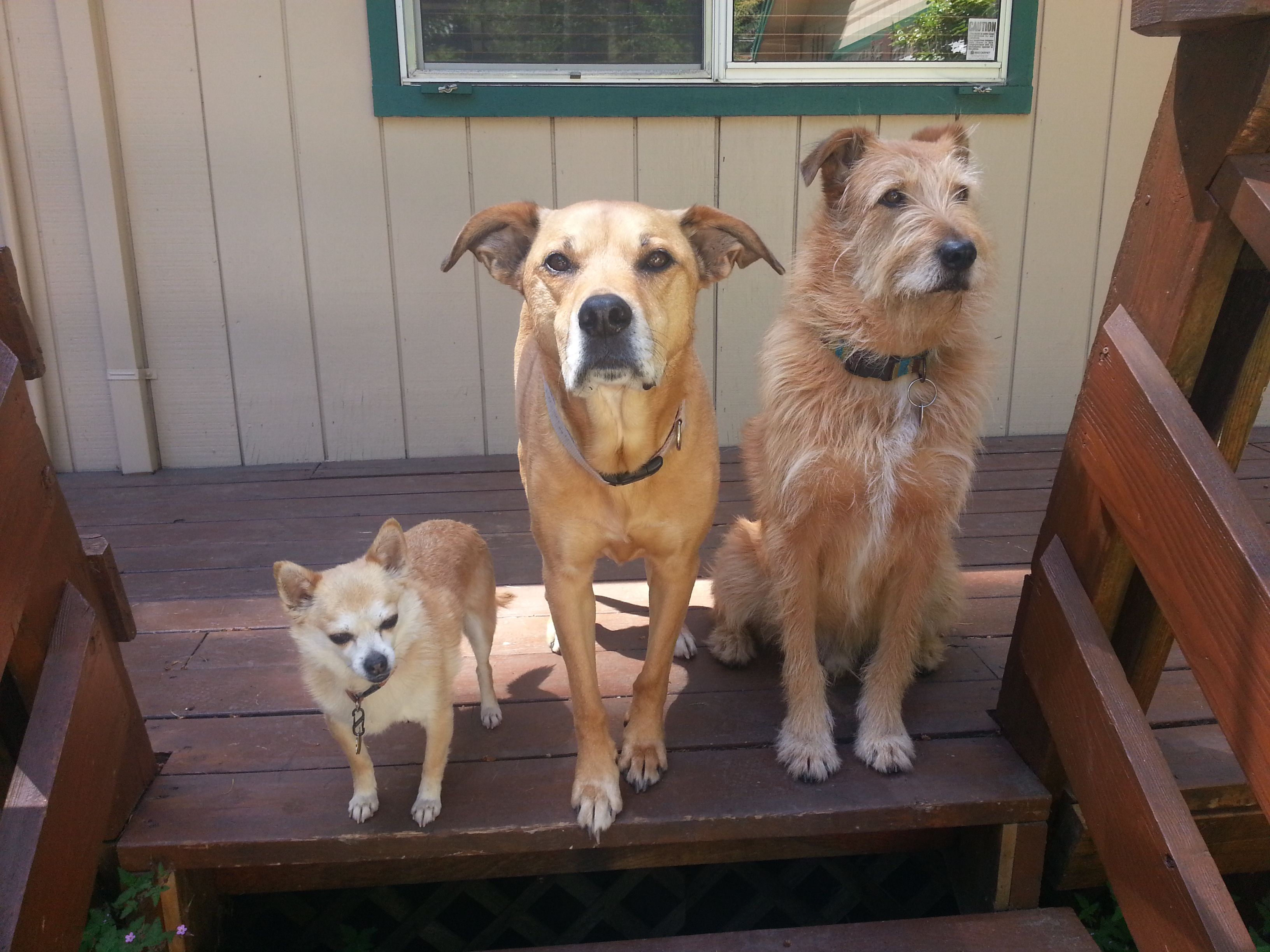 I’ve been helping with a health crisis in my family, which somehow always seems to result in moving dogs all around the state, because pretty much all the members of my family are dog people.

My brother was recently diagnosed with cancer, and it’s been taking a bit of scrambling to get him to medical appointments and cover his many responsibilities, which include being the daytime caregiver for his five-year-old daughter and his father-in-law (who has Alzheimers), and his dog, Hannah, a 12-year-old Rhodesian Ridgeback-mix.

Today, my brother and his wife, daughter, and father-in-law are traveling four hours to a specialty medical consultation at a university hospital. I brought my dogs to my brother’s house, where I will stay so I can dog-sit Hannah while they are away. They are taking my son’s dog, Cole, with them. I’ve been dog-sitting Cole for the past few days, while my son was on tour with his sports team to games in Seattle and Vancouver, British Columbia. My son is home in the Bay Area now, not far from the medical center my brother is visiting, and so my son is going to meet my brother’s family and take his little cousin and my brother’s father-in-law to a park and the movies and out to dinner while my brother and his wife are at the medical center. And of course, this way he gets his dog back without having to drive hours to pick him up. In our family, this is a win — although it means quite a full car. Well, Cole is good at wedging himself into small spaces, having grown up in my son’s car, which is often full of college athletes and their gear.

My husband, who is NOT a dog person, thinks we’re all nuts – first, for having all these dogs in the first place, and then, for not just leaving them in a backyard with a food dispenser and a trough full of water when we leave home for a day or three. I’m exaggerating slightly, but he just doesn’t feel what we feel for our dogs, and doesn’t see why we would drive them for hours in a car to be cared for by another family member when we go places. Well, because they are family, that’s why. We’d never hire some stranger to care for my little niece or her maternal grandfather for a night, either.

Hannah, the matriarch among our canine relatives, requires a bit of special care. Like most Ridgebacks, she’s highly protective of her home and family, so having a neighbor or other relative stranger care for her at her own house can be a bit tricky, especially as her vision and hearing are beginning to decline. She becomes increasingly anxious over time when she’s not home, so even though in the past she has stayed at my house on many occasions and settled in with my “pack” quite nicely, I feel like she’s earned the privilege of being cared for at her own home at this point. And goodness knows, I don’t want anything happening to her right now; she’s a beloved member of the family, and playing an important therapy dog role for everyone in the household these days.