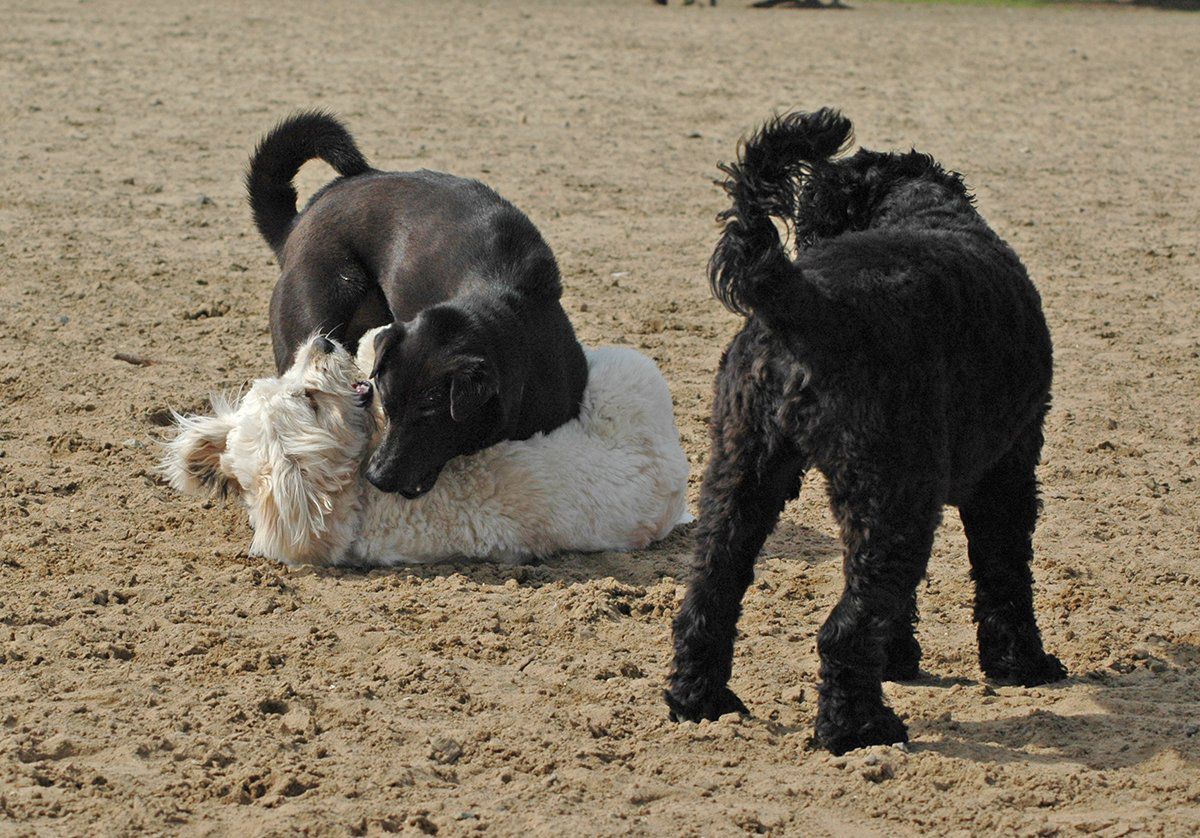 I’ve never owned a dog who HAD to exercise at a fenced dog park, but I’ve fostered a number of them. I’ve been able to train all of my dogs to perform a solid recall, even when faced with tempting distractions (deer, rabbits, other hikers with dogs, etc.), and have always lived in places where I had access to off-leash trails. But when I’ve fostered wayward adolescent dogs, there have been times when I thought the dog would benefit greatly from a long period of exercising hard, but I needed the security of a fenced area, because we hadn’t yet had enough time together to build a solid recall. At those times, I’ve turned to a dog park – but only with extreme caution, because I think the hazards and risks of dog parks, in very many cases, outweigh the benefits.

The most extreme risk is also the most common at dog parks: that of other dogs hurting (either physically or by intimidation) or even killing your dog.

I’m writing this today because I just read this chilling, very abbreviated account of a completely avoidable dog park fatality. A woman was at the park with her small, middle-aged dog. This particular park doesn’t have a separate area for small dogs, so in my mind, that’s strike one. I would never take a small dog to a big park where there are big dogs running around! Even if they don’t get attacked or harassed by bigger dogs, small dogs can be seriously injured or killed if they accidentally collide with a big dog who is running fast.

Plus, a few-seconds-long video clip of the dog playfully rolling around on the grass was enough to show me that this was not a dog who *needed* to be exercised at an off-leash park! She looked like her exercise needs could easily have been met on a long line in any small open space. This little dog was attacked by two large dogs who were at the park with a dog walker who had been hired through a popular app – in other words, someone who didn’t necessarily know the dogs, and (probably) did not have the experience or education to know that the dogs were dangerous to other dogs.

I don’t ever go to a dog park blindly. I won’t take a dog with me the first time I go to ANY dog park; I want to see it first, walk its fence line, locate any potential hazards or things that might be dangerous or challenging for my dog. I’ll never forget the time I was at Point Isabel, a famous open-space off-leash area in Richmond, California (near Berkeley, on the east side of the San Francisco Bay), and there were a number of people trying to help a woman capture her dog, who was swimming in the bay, and kept swimming farther and farther from shore in pursuit of seagulls and other birds he saw. She was sobbing and kept crying out, “I didn’t know they could just get in the water! I thought there was a fence! I didn’t KNOW!” She apparently had never been to the shoreline park, but had taken her water-loving dog there and unclipped his leash anyway. Oops.

It also helps to know the best time to visit any given park. Perhaps it doesn’t matter so much if you have a big, super gregarious, playful dog, who loves all other dogs and doesn’t mind being bossed around by more assertive individuals, but if you have a dog whose social grace depends on NOT having other dogs in his face, you might want to figure out when very few other people and dogs are at that particular park. If there is literally no time when the park is empty, I would find a non-dog-park fenced space where no other dogs are present to exercise that dog off-leash. I just wouldn’t risk worsening that dog’s social skills by setting him up to fail!

In my opinion, very few of the dogs who are taken to dog parks need that sort of space; most of the dogs who are there really shouldn’t be there. Even if they are in no way aggressive, dogs who don’t enjoy other dogs shouldn’t be there, because they WILL be approached by other dogs; that’s a given. For example, my 10-year-old dog Otto can get along with any other dog – as long as they pretty much leave him alone. He doesn’t want to play with other dogs, he doesn’t want to go sniff them, and he certainly isn’t going to put up with any other dogs sniffing HIS butt. So there is no earthly reason to take him to a dog park, where he will undoubtedly be forced to suffer all sorts of fools approaching him and trying to smell him. In no time at all, he’d snap at some dog, and some younger, bigger dog may just take offense and – ugh, I can’t even think about it.

Puppies and young adolescent dogs certainly benefit from the opportunity to run, socialize, and play with other playful dogs. But taking an inexperienced adolescent to a dog park is something else I would never recommend. There are too many playground bullies at dog parks – dogs who get a little charge out of creaming “new kids” at the park. Think about it: You do your pup no favors to take him to a place where, in the middle of the most fun he can have, he’s going to get violently assaulted and/or pee-his-pants scared. It might work if there is a separate area where he can play with the small dogs – and poses no risk to the small dogs himself. Otherwise, I’d suggest sticking with organized puppy socials offered by your trainer or private play dates set up with other local puppy owners.

Same goes for timid dogs. I would never bring a socially fearful dog to any dog park. Period.

Private dog parks are a concept with a lot of promise. You’d pay for the safety and cleanliness of the park, and because all the park-goers would be pre-screened for friendliness. Park attendants would enforce the rules and educate users about appropriate and inappropriate dog behavior.

But public dog parks? I’d avoid them unless you HAD to use them, and then, only with extreme caution.