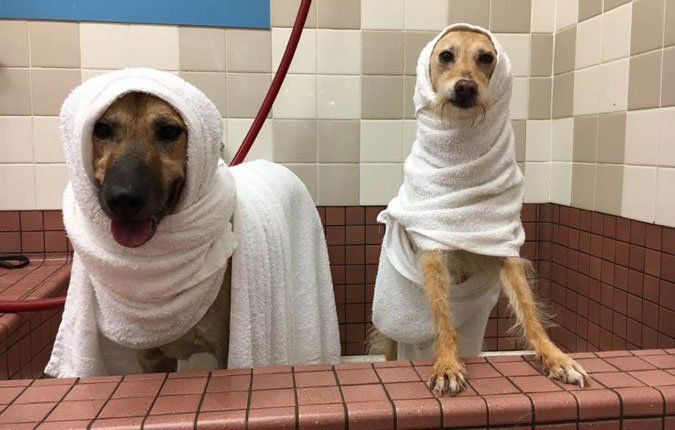 A few months ago I was horrified to learn that my good friend (and frequent model for WDJ articles, Berkeley trainer Sandi Thompson) was giving a dog she has owned for five years the first bath he’s had since she rescued him – literally rescued him, as a volunteer during the historic floods in Thailand in 2011.

This summer, Sam had his first encounter with a good old American skunk, which prompted the bath (and cute photos), but I was incredulous: How can that possibly be his first bath in more than five years??

I bathe my dogs at least three or four times a year. Before I lived close to a river, where my dogs swim almost daily in hot weather, I probably bathed them even more often. I like a clean, fresh smelling coat when I kiss my dogs, and I love the way a clean coat feels when I stroke them. When I feel I have to wash my hands immediately after petting a dog, either due to the funky aroma or a greasy, dirty residue left on my hands, that dog has to get bathed. I’ve bathed friends’ dogs for this reason!

This topic is on my mind right now because I’m fostering a mama hound dog and her seven puppies for one of my favorite breed rescue groups, the American Black & Tan Coonhound Rescue. She was recently “sprung” from a shelter by the group; she’s heartworm-positive, and delivered her pups in the shelter two weeks ago. The ABTCR will see to it that her puppies are vaccinated and neutered and adopted to qualified homes, and that she gets treated for her heartworm infection and placed in a very special home; she’s as sweet as any dog I’ve ever met, she just craves human affection. Which makes it even more bizarre to me that she’s so neglected: Her toenails are super long, she’s super thin, and, ugh, heartworms. And to top it all off, she reeks of the shelter, like any dog who has had to sleep on pee-soaked concrete. She needs a bath!

But she’s also nursing, and anxious about her pups, so I haven’t yet whisked her off to either the bathtub or a groomer.  I’m leaning toward the groomer, because they will be far faster than me at shortening those thick, long nails, and are better equipped for a fast but thorough bath, with cross-ties and a waist-high tub.

I don’t think there is any reliable science regarding an optimal number of baths for dogs. The most you can get veterinarians to say is that if you give your dog too many baths, or fail to rinse all the soap out of the dog’s coat, you risk drying out his skin and worsening any sort of itch he might have.

I’ve never had a thick-coated dog, but I had a groomer tell me once that the worst mistake that people can make when bathing their thick-coated dogs is not drying the coat thoroughly enough. Dampness in the base of the coat can also start nasty skin conditions.

Back to Sam, who got his first bath in five years (and his pack-mate, Turtle the dog, who was thrown into the tub for good measure): Sandi says that she originally didn’t bathe Sam because of the trauma he suffered in the floods and the international air travel (to get him to the U.S. from Thailand), and then, the severe separation anxiety he displayed (the long story of how Sandi helped Sam recover fully from separation anxiety is harrowing but heart-warming). Sandi felt she had to protect Sam from any unnecessary stress, especially since he hates water. Fortunately, she says, his coat is pretty “self-cleaning” – dirt pretty much falls off of him and he doesn’t seem to ever smell – at least, until he met his first skunk.

Fortunately, all the work Sandi invested in Sam’s recovery from separation anxiety have paid off; today, he is a confident, happy dog, fully able and actually preferring to stay home. He has even handled his first – and second – post-skunk-encounter baths in this country with aplomb, though of course Sandi hopes there aren’t many more of these on the horizon.

How often do you bathe your dogs?