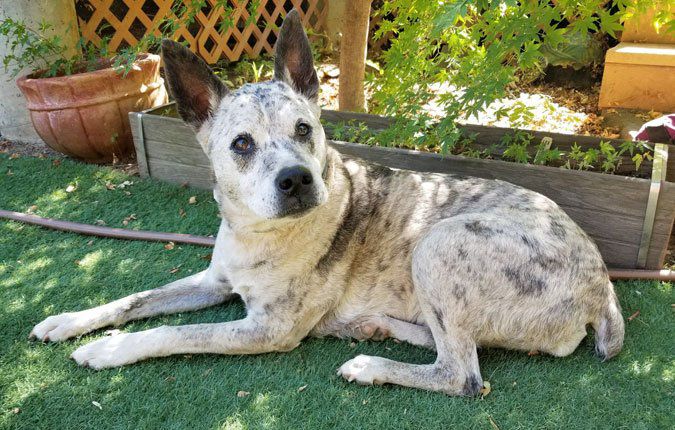 A couple of weeks ago, out of the blue, I received a message from Patty, a massage therapist I know. I’d call her “my” massage therapist, but it would be overstating how often I engage her massage therapy services – not more than two or three times a year, usually when I’ve done something bad to my shoulder or neck. I most recently saw Patty in early April.

The message I received started, “Hi, I wanted to update you on Pepper.”

Pepper is her senior Cattle Dog-mix. The last time I had a massage, we spent a good deal of the time talking about Pepper’s itching, chewing, and scratching. In the course of the conversation, we eliminated fleas as a potential cause for Pepper’s itching (because Patty hadn’t seen a flea on any of her animals for ages, and all the animals in the household were receiving regular topical treatments for fleas), and discounted the possibility that it was environmental allergies (as the itching seemed to have no seasonal component; Pepper had been itching for months and months).

I proposed that Pepper might have an allergy to something in her diet. I suggested, as I always do when I hear a similar story, that Patty write down the ingredients in any food that Pepper had received in the past few months. Once she had all the major ingredients written down, she should try to find a food that contained none of the major protein sources or carbohydrates that were found in the foods she had been eating. In other words, she should try an informal food elimination diet, by feeding only foods with ingredients that were novel to Pepper.

Patty had been considering whether a food might be triggering an allergic response in her dog, and had tried a number of different foods, but to her dismay, realized on the course of our conversation that she hadn’t really kept track of the ingredients in the foods. She told me she’d try to recreate what she had fed Pepper and look for something with ingredients that Pepper had not yet experienced.  Again, that was back in April. I hadn’t heard anything else from Patty until the note I received a couple weeks ago. After her greeting, the note continued:

“Your allergy suggestion, I believe, cured [Pepper]. Her dermatitis is almost gone, the itching has stopped. She is a much, much, happier dog. Thank you so much! I would like to give you a free massage as a special thank you from Pepper. Please give me a call.”

I happily took Patty up on her offer; my chronically sore shoulder had been bothering me! When we talked during my most recent massage, Patty explained that she had gathered the ingredients list from every food she could remember buying and feeding to Pepper. When she compared the ingredients list, she realized that every single food she had fed to Pepper contained chicken. She looked for a food that contained no chicken and started feeding that to Pepper – and within two weeks, she observed that the dog was scratching and chewing far less. By the end of a month, Pepper was no longer spending any significant amount of time chewing or scratching at herself, and her coat was growing back in! Her skin, which had been red and bumpy in the places that Pepper could most readily reach, looked like the skin in places where Pepper could not reach! She really was on the mend.

I warned Patty to keep an eye out for treats that might contain chicken, too, and Patty said, “Right! We already learned that! A client came by with some treats for Pepper, and not a day later, Pepper broke out in itching and scratching and chewing again. It took another week or more before the itching stopped.”

I’m grateful that Patty shared both the good news about Pepper with me. As nice as the free massage was, the fact that such a nice dog is more comfortable and healthy was wonderful for me to know.

For more information, check out this article about benefits of a food elimination trial.