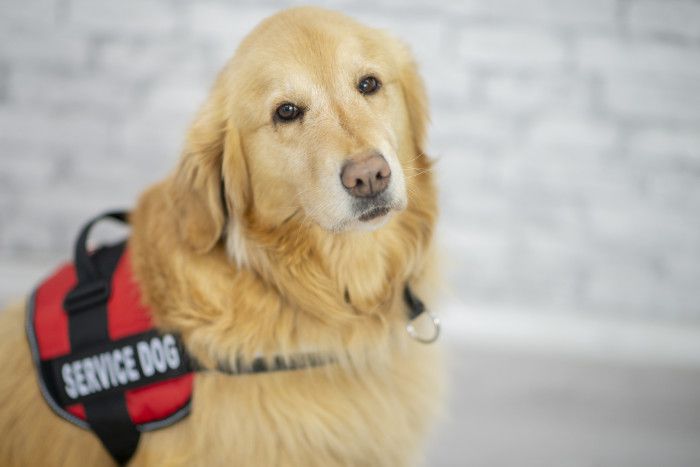 I am certain that if you have a child with a chronic and particularly challenging medical condition or behavioral disorder that cannot be readily addressed or resolved, you could become desperate for help – desperate to receive any assistance that you heard good things about. I completely sympathize with parents who are raising a child like this; my heart goes out to them. Unfortunately, some people see them as potential targets for service dog scams.

Several people sent me an article about a single mother in Wisconsin who was duped into raising more than $20,000 for a dog she thought would help ameliorate her son’s aberrant behavior. Her 10-year-old nonverbal son has autism, and often has fits of frustration that make him bang his head or become destructive. The mother, and her son’s social worker, had heard that service dogs could help some children with autism, and they started researching organizations that provide and train service dogs. At some point, the mother learned about an organization in Virginia, called Service Dogs by Warren Retrievers (SDWR), whose representatives promised that they not only train the dogs, but bring the dog to your home and teach the dog and client to work together. That sounded great to the mom, who said that travel with her son is nearly impossible.

The organization also made it easy for friends and family members to help a family in need of a dog meet the high cost of one of their dogs and related services: SDWR provided an online fundraising page to which all donations could be sent, and indicated that when the total amount due was reached, a dog would be forthcoming. But after many months of fundraising and lots of community support, when the target amount – some $20,000 – was reached, SDWR sent only an email, which stated that the family was now on the “wait list” to receive a dog. And not long after, emails sent to SDWR started bouncing back and its phone number was disconnected. Then the family learned the organization had declared bankruptcy. The $20,000 was gone.

This family wasn’t the only one to be scammed by SDWR. It developed that the group had received money from a number of other families, who also never received a dog. The families started a Facebook page in order to communicate with each other and share information about SDWR that might help any of them receive even partial reimbursement through the bankruptcy court. And more families claim that they did receive dogs from the organization who were not only untrained, but unhealthy.

But here’s the thing: The people behind this organization aren’t the only ones out there scamming families who are desperate for a service dog. This happens frequently. There are numerous unscrupulous people who are selling unhealthy and/or untrained (or poorly trained) dogs and representing them as service dogs.

WDJ Training Editor and long-time trainer Pat Miller wrote about this in an article, “Service Dog Scams,” that we published in the June 2019 issue. The article contains many tips on how to identify and avoid these scams. Make sure that anyone you know who is considering getting a service dog for a vulnerable member of their family has a copy of the article!

Note: Pat’s article was published in the magazine last year, but due to a glitch when we moved 22 years’ worth of issues to a new web service provider last year, it never appeared in the online version of the magazine, and thus, never got as much exposure as it deserved. Forward it to anyone you know who is thinking about a service dog for someone in their family!