My senior dog, Otto, is nearly 13 years old. He often acts like a big grump around any puppies or foster dogs I have here, but honestly, he goes out of his way to snark at them. There are many foster care providers who stop fostering during their dogs’ senior years, because many dogs who were social and willing to guide foster dogs around the house get sore and achey and stressed at the thought of young’uns and clumsy idiots underfoot – and honestly, I thought I would be one of them. Otto does not permit any other dogs to sniff his butt, stand anywhere between him and the door, or accidentally brush up against him while romping the “fun uncle” Woody. I have long anticipated the day when I would start saying no to fostering, to give Otto the space he deserves.

But I recently said yes to fostering a single puppy, because I could not imagine that this puppy would possibly – could possibly – get in Otto’s way. Right this minute, I’m fostering a puppy who was found in a ditch with a broken leg, starving and flea-covered and scared to death. The puppy’s injury appears to be weeks old, if not more than a month old, and severe enough that the veterinarian who saw him said unequivocally that the leg should be amputated. I figured I could keep the not-very ambulatory puppy with me in my office until his surgery date arrived; how could a puppy who can barely get around bother Otto?

In the space of a week, I have witnessed and learned some very interesting things:

The puppy is having surgery as I write this, and I’m getting out all my exercise pens so I can limit the puppy’s movements and keep out from under Otto’s feet, and refraining from play with Fun Uncle Woody for at least a few days. The plan is for me to keep the pup for about two weeks post surgery, and then, hallelujah, there is a family who wants to adopt him.

And then, really, I don’t plan to foster again for a while… Or should I?

When Dog Ownership Gets Tough 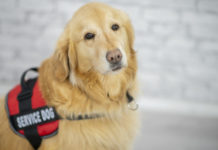 Nancy Kerns
9
If you have been following the weather news, you might have guessed what this post was going to be about, am I...