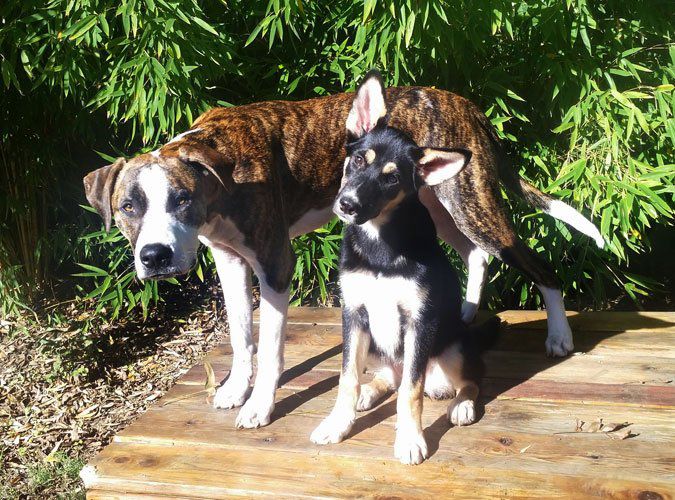 My close friends know that I have been looking for the perfect dog for my dog-crazy seven-year-old niece Ava and her mom for some time – and that this is in contrast to my usual stance in opposition to the whole concept of the “perfect” dog.

I don’t believe that dogs should be expected to come into a home that may not meet their needs very well and yet not cause a single ripple in the fabric (literal and figurative) of that home, any more than one would expect a new baby or adopted child or even an elderly relative to fit in seamlessly to a new home.  In my view, adjustments and accommodations should be made on all sides, with respect for all the parties’ needs considered, in order to make the relationships and living situation work for everyone. So, for example, when you bring home a Border Collie or German Shepherd Dog, you’d better accept  – nay, embrace ­- the exercise and mental stimulation needs of that dog, if you want him to be happy, and you can be happy with him. At a minimum, you will likely have to carve out a significant chunk of time in your day to devote to physical and mental exercise for the dog, and you may well have to do some problem-solving if it turns out that the dog develops problem behavior/s, such as separation anxiety, counter-surfing, urine marking, barking, chewing, over-excitement with guests, etc., etc.

I know all that – I preach all that! And I still want a perfect dog for my sister-in-law and niece.  They have just been through so much in the past two years: My brother’s diagnosis, too-brief fight with cancer, and death. The death of my brother’s dog, Hannah, who had been a loving guardian of and companion to little Ava for her entire life, a few months prior to my brother’s death. Having to move Ava’s grandfather, who is in the late stages of Alzheimer’s disease, out of their home and into a care facility.  I just don’t want to add any burden to Ava’s mom’s already heavy load of responsibilities, though we both want Ava to have a dog. She’s crazy about dogs.

Ava loved my Chihuahua-mix, Tito, and he liked her, too, but only for short-term visits. After a few days at Ava’s home, the senior dog would get cranky and snappy – probably due to his perennially sore back. He’s never liked anyone picking him up, and was just as apt to snarl as wag if someone petted him. A long-term placement there wasn’t fair to either of them.

So I’ve been looking for a dog, not too big (Ava and her mom are both petite!) nor too small (so it could engage in active romping play with an active, outdoor-loving girl); not too old to be playful, nor so young that it knew nothing about living in a home. The most important attribute, in my mind, is a general affection for and interest in kids. This dog-loving girl needs a girl-loving dog!

I’m hoping I’ve found the right candidate (in my local shelter, of course!). She meets nearly all of my criteria, save one important bit: she’s too young, only about 4 months old, so she’s going to stay with me for a while for some training and socializing.

Woody could not be happier. He just turned a year old, but still has lots of puppy energy and need for a lot of stimulation. He’s been thrilled to have someone to romp, roll, chew, and wrestle with. He’s shared my home (and home office) with dozens of foster puppies since I fostered his litter last December, though I took a break from all that after the 11 pups from the Great Dane litter all went to their (forever, I hope) homes in July. Having this pup here has been like an early Christmas for him.

Otto, on the other hand, is looking pretty glum about this turn of events. I think he figured he only recently got Woody civilized – Woody was starting to behave like a respectable grownup dog –  and now that’s all coming undone. Idiocy reigns again (in Otto’s mind), in the form of puppies bumping into him or, worse, running over the top of him when they are playing; puppies racing past him to get the ball that he was fetching in a more dignified manner; puppies splashing into water he was delicately lapping, etc. Rude, rude, rude, and disorderly. Not Otto’s cup of tea.

My husband is in the same camp. Woody only recently stopped deconstruction of his doghouse, and it looks like our apple tree, which Woody had been chewing the bark from, might live after all. And yet, a new set of puppy tooth-marks have appeared on the bench my husband built on our deck back when Otto was an adolescent. We’re going backward in his mind, too.

It’s impossible to explain it to Otto, but my husband understands: It’s only temporary, and we’re doing this for Ava. She and the pup met last weekend, and it looked like mutual love and attraction instantly. This pup is affectionate and playful, sweet and smart, and though she’s just as mouthy as all pups are at this baby-tooth-shedding stage, she’s got a nice soft mouth. She’s doing great with house-training, crate-training, and lessons in basic manners. Ava’s mom is busy getting references for a dog daycare and/or a dog walker, and I’m making inroads into finding a trainer they can work with in their town. In another few weeks, we’ll deliver her to Ava, and I might spend a night or two to get housetraining in theirhouse initiated, and get them all settled in together. I can’t wait.