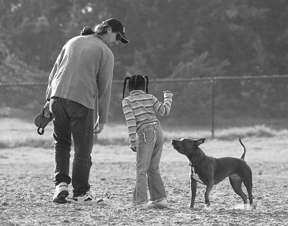 The tragedy of the 12-year-old boy killed by his family’s Pit Bulls in San Francisco once again highlights the importance of providing information that will help people survive such dog attacks – and perhaps the need for laws that encourage and require dog owners to be responsible for their dogs.

Any large, powerful breed of dog will, occasionally, cause serious injury, even death. Small dogs can certainly bite, too, though they normally have less potential to do serious harm (the Pomeranian who killed a six-week-old infant in California in 2000 notwithstanding).

You and your family members would be smart to learn how to stay safe around aggressive dogs, by knowing how to avoid provoking an attack and how to protect yourself should one occur.

Easy to say, difficult to do
When I was a humane/animal control officer in Marin County, California, I once handled a report of an aggressive male Rhodesian Ridgeback who was running at large in an upscale suburban neighborhood. As I walked up the front sidewalk toward the house where the dog was reported to live, a reddish-brown flash came speeding around the corner of the house, headed menacingly and directly at me.

I averted my eyes and held my breath, frozen in place as he charged up and bumped me with his nose, hard.

I have no doubt that if I had moved when he hit me with his nose, he would have bitten me, probably badly. Instead I passively held my ground and he backed off, staring at me intensely. Still without making direct eye contact, I backed slowly to my truck and climbed in, reached behind the seat for my control stick, stepped out, slipped the loop over his head and pulled it tight. Then I breathed.

In her excellent book, The Other End of the Leash, Patricia McConnell makes the important point that, as primates, humans tend to automatically do exactly the wrong things when confronted by a dog. Instinctive, genetically programmed primate behavior causes us to make direct eye contact and confront a threat with full-face aggression – stare at the dog facing him directly, perhaps yell, reach, or move toward him or make other defensive moves, escalating rather than defusing the dog’s aggressive behavior.

Programmed by decades of living and working with dogs, I knew to avoid eye contact and movement, and I froze instead. Lucky for me. Many people either scream in fear (or in an attempt to attract attention and help) or shout to try to scare or bluff the dog into leaving. Unfortunately, this usually further provokes the dog.

You can reduce the risk of being attacked, and reduce the likelihood of serious injury if you are attacked, by doing the right things, pre- and post-confrontation. The next time you feel threatened by a dog, remember these tips:

• Be a tree: If a dog approaches you with assertive/aggressive body language, be a tree. Stand perfectly still but relaxed. A tense, unnatural position looks weird to the dog; weird can trigger an attack. Avoid direct eye contact, but keep the dog in your peripheral vision. Keep your arms at your sides, and don’t speak – and certainly don’t scream, which can further excite a dog who is already aroused. By offering appeasement behaviors and not doing anything assertive or provocative, you increase the odds that the dog will back off and move away without attacking.

• Be a rock: If the dog does attack despite your inoffensive body language, you have two choices. If the dog is small or just nipping at you rather than launching an all-out attack, seek safety – climb up on a fence or tree, the hood of a car, or any object large enough to provide sanctuary. You can unobtrusively scope out the landscape for such objects while you’re being a tree.

If you feel you’re being overpowered by the dog, be a rock. Drop to the ground in the fetal position with your hands behind your neck and legs pulled up to your chest, protecting your throat, face, and vital organs. If there are people nearby who could help you, screaming to get their attention could save your life. On the other hand, screaming may also further provoke the dog. If you feel certain that no one will be able to hear you, don’t yell.

• Find a shield: While you’re being a tree, carefully scan the area for possible shields – a gate you scan slip through, a garbage can lid you can hold between you and the dog. If you think the dog will allow it – like the Ridgeback that came after me – back carefully to your shield, keeping the dog in view, and use it as needed to protect/defend yourself.

• Find a weapon: In no way do I advocate hitting dogs in the name of training. But if you’re attacked and have access to a club or other weapon of some kind, do what you need to do to save yourself. Don’t attempt to use a weapon, however, unless you’re prepared to use it with full commitment. Waving a stick feebly at an attacking dog may only antagonize him further. If you use it, either offer it as a target for the dog to bite, or use it as hard as you can. If you walk in an area with free-roaming dogs, consider carrying a club with you, or a shield such as an umbrella, to help ward off dogs.

• Report incidents: Even if you escape unscathed, report the incident to animal control and the police department; the dog’s next attack may be fatal. If you don’t feel local officials are taking you seriously, talk to their supervisors, and if necessary, your local elected representative and the media. You may save the life of the next person the dog would accost. (For more about reporting dog attacks and how to get local officials to act, see “An Accident Waiting to Happen,” February 2004.)

Complications
The first four tips listed above are much more difficult to implement if you’re walking your own dog(s) on a leash, or are accompanied by a child, senior citizen, or disabled person. You may need to use your own body as a shield by calmly moving into position between your dependent dog or person and the attacking dog.

You may be able to lift a child or your dog onto a raised surface for safety, and then climb up yourself. You can still use the fetal position, either while coaching the other person to do the same, or by folding a small child or small-to-medium-sized dog between your chest and knees, or wrapping them in a jacket if you happen to have one with you.

You might practice these maneuvers in advance with lots of positive reinforcement so no one panics if it happens in a real-life encounter. Carrying a weapon of some kind is still an option.

I’m sorry to say that there are no guarantees that the above suggestions will save you from being bitten, or even mauled, but it’s a good bet that if you do the wrong things when a dog accosts you, or do nothing at all if you’re attacked, the damage will be greater. It’s sort of like the terrorist threat: you don’t want the risk of being attacked to alter your regular activities or enjoyment of life, but it pays to be on heightened alert, and to be prepared to defend and retaliate in case of attack.

-Pat Miller, CPDT, is WDJ’s Training Editor. She is also author of The Power of Positive Dog Training, and Positive Perspectives: Love Your Dog, Train Your Dog. Miller lives in Hagerstown, Maryland, site of her Peaceable Paws training center. 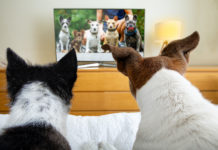 Would Your Dog Enjoy Dog TV? 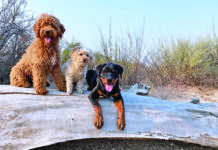 To Buy or Adopt a Dog? What You Should Know 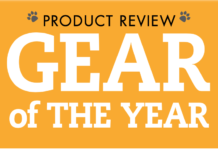