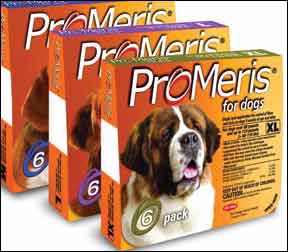 Pfizer has announced plans to discontinue manufacture and sale of its flea and tick control product, ProMeris. Orders will continue to be filled until September 20, 2011.

ProMeris was introduced in the fall of 2007, and touted as the first topical product to use metaflumizone. Pfizer gained control of ProMeris when it acquired Wyeth/Fort Dodge Animal Health in 2009. Pfizer is also the maker of Revolution, used to control fleas and one species of ticks, along with heartworm, ear mites, and sarcoptic mange.

While no specific reasons were given, it’s likely that Pfizer’s decision was influenced by the March publication of a study in the journal Veterinary Dermatology that was done at North Carolina State University. The study concluded that ProMeris “has the potential of triggering a variant of PF” (pemphigus foliaceus, an autoimmune disorder of the skin that will be discussed in an upcoming article on nose and footpad disorders). Lesions begin at the site of application, sometimes months after the initial application, and may later spread to other areas of the body. Immunosuppressive drugs are sometimes required for treatment. While most dogs achieve complete remission, lesions may recur in a few cases even without the further application of ProMeris. Labrador Retrievers and other large-breed dogs appear to have an increased risk for this adverse reaction. It’s important for vets to be aware of these findings, to avoid misdiagnosis.

Amitraz, one of the active ingredients in ProMeris, is a monoamine oxidase inhibitor (MAOI). Other products that contain amitraz include Preventic collars and Mitaban. Products containing amitraz should never be used together.

Amitraz can be dangerous when combined with antidepressants, such as Prozac (fluoxetine), or with other MAOI inhibitors, such as Anipryl (l-deprenyl, selegiline). DL-Phenylalanine (DLPA), used to treat chronic pain in dogs, should also be avoided when using MAOIs, such as amitraz. Cats are at risk if they come into contact with topical products, and even owners who are taking MAOIs themselves may run into problems using these products on their dogs.

ProMeris had recently been approved for treatment of generalized demodicosis, also called demodectic mange or demodex (treatment is not needed for the localized form). Other treatments for generalized demodex include giving high doses of ivermectin (the active ingredient in Heartgard) daily or every other day for long periods, and weekly or biweekly dips with potentially toxic Mitaban. In comparison, ProMeris is far more convenient, requiring only topical application every two to four weeks, and many veterinarians are sorry to see it go for that reason. Owners of dogs who reacted badly to the drug, however, may be wondering why it’s not being pulled off the market immediately.