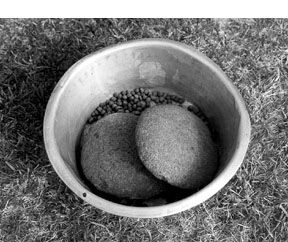 Gastric dilatation-volvulus, or “bloat” for short, is a feared disease among many dog owners. I have worked as an emergency veterinarian and have observed first-hand the horrible effects of this condition on a number of my patients, and I can certainly attest to its devastating effects.

Knowing what bloat is, and learning to recognize its clinical signs early is important for all dog owners so you can ensure prompt treatment before simple bloat progresses to irreversible and fatal whole body shock. Certain dogs are more likely to become a victim of this horrible stomach disorder, so it helps to know what those breeds are in case your dog is one of the more statistically likely candidates for the illness. And finally, it also helps to know how it is treated, and whether there are any preventive measures that can be taken to keep your dog from ever becoming a victim of bloat.

What is Bloat in Dogs?

The technical term for bloat is gastric dilatation. Simply put, this means the stomach dilates and enlarges. The main constituent of this dilation is air, although food and water are usually present in the stomach as well. This makes bloat quite different from a simple case of over-eating, where the pet engorges on food and the stomach fills rapidly with the last meal eaten.

Why does the stomach fill rapidly with air? The main cause seems to be aerophagia, where the pet literally swallows a large amount of air. Most commonly this is from eating too quickly. Unfortunately, for some reason, the air is not passed into the intestines or belched back out the esophagus. No one knows what causes the stomach to retain air.

Another theory is that after eating, some pets swallow air as they exercise, causing the stomach to bloat. While many doctors advise clients not to allow their dogs to exercise immediately after eating, I do not know of any controlled studies that show conclusive proof that exercise restriction prevents bloat. In many of my patients there was no history of exercise immediately after eating that contributed to the bloating. And since wild dogs and their ancestors (wolves) may need to be on the move after a meal (although, given the chance they usually rest to digest their food and recover from the recent kill), I doubt that exercise is a major factor in bloating. Still, until evidence proves otherwise, many veterinarians discourage exercise for 30-60 minutes after eating.

One of the myths regarding bloat is that only large dogs can develop bloat. It is true that bloat is more commonly found in large and giant breed dogs and deep chested dogs, usually two to 10 years old. The most commonly affected dogs include Great Danes, German Shepherds, Saint Bernards, Labrador Retrievers, Irish Wolfhounds, Great Pyrenees, Boxers, Weimaraners, Old English Sheepdogs, Irsih Setters, Bloodhounds, and Standard Poodles. However, any dog can develop bloat.

Another myth involves feeding your dog from a raised bowl as a way to prevent bloat. Feeding from a raised bowl can be very helpful in some dogs with a disorder called megaesophagus (where the dog repeatedly vomits up his food because the food has difficulty passing into the stomach). However, I have not seen anything in the veterinary literature that confirms that a high feeding table can prevent bloat (although, as you’ll see, there are some things you can do to minimize the chance of your dog bloating).

Some owners feel that feeding only cereal-based foods will cause bloat, or that dogs eating raw diets will not bloat. It is true that cereal-based foods ferment more in the gastrointestinal tract, which can cause excess gas, but this occurs further along in the intestinal tract (mainly the large intestine.) The only thing I have seen repeatedly suggested in the literature is that excess calcium in the diet, and excess air being ingested with the diet, may contribute to bloating in some dogs. Dogs can develop bloat no matter what diet is fed.

Bloating is a Life-Threatening Condition

Regardless of the actual cause, bloating in dogs is one of the few true emergencies in veterinary medicine. Dogs can and do die if not treated promptly. As I’ve mentioned, with bloat the stomach fills with air that it cannot expel. The bloated stomach compresses blood vessels in the stomach wall and abdominal cavity, causing hypovolemic shock. In severe cases, this bloated stomach can actually twist on its longitudinal axis. This twisting or torsion is called volvulus. As the stomach twists, it may pull the spleen with it, causing torsion of the spleen. If not treated promptly, both the spleen and stomach will die as the twisting cuts off the blood supply to these organs. Treatment involves decompression of the air-filled stomach and surgery to reposition the stomach if rotation occurs.

In an emergency case of bloat, pressure may be quickly relieved by inserting a large gauge needle (14-18 gauge) through the skin and right into the bloated stomach. This is only temporary treatment, but it does buy time and give the dog quite a bit of relief. After this temporary needle decompression, the dog is lightly anesthetized with an intravenous anesthetic (due to the shocky condition of most patients, less than half of a normal dose of anesthetic is usually all that is necessary to cause anesthesia).

Then two tubes are passed into the dog’s mouth: one goes into the trachea (windpipe) and one goes down the esophagus into the stomach. The stomach tube will be used to “pump the stomach,” removing food, water, and any remaining air. The tracheal tube is used to protect the airway so that no food or water accidentally enters the lungs. Other conventional therapies that may be used include IV fluids and corticosteroids (for shock) and antibiotics to prevent secondary infections. Homeopathic therapies such as Arnica can be used in the post-operative period to assist healing, and acupuncture can be used for pain control.

Dogs with volvulus will require surgery. Surgery has two objectives: to assess the damage done to the stomach, spleen, and other organs, and to reposition the stomach into the proper position. Stomachs that sustain severe damage cannot be repaired, and these patients must be euthanized. Stomachs with mild damage can usually heal after repositioning. Veterinarians hope that the surgery prevents future occurrences, as well.

The techniques to reposition the stomach is called a gastropexy, and involves literally sewing the stomach to some part of the body. Most commonly a circumcostal gastropexy is performed. In this technique, the stomach is sewn to the rib cage. The surgery is quite effective in preventing future episodes of volvulus, but no surgery can prevent bloating.

Owners of larger breed dogs (who might be prone to bloat and volvulus) have asked me about the feasibility of performing a gastropexy to prevent any episodes of bloating. I advise against this for several reasons:

• We can’t prevent bloat with this surgery, only the torsion (volvulus) that can accompany episodes of bloat.

• While nothing is guaranteed, following certain prevention tips can help reduce the incidence of bloat.

• I prefer not to subject pets to the inherent risk of unnecessary surgeries.

• I have seen no evidence that this prophylactic approach is worthwhile since gastric dilatation volvulus may never occur in any given pet.

If you are considering such a prophylactic surgery, I would advise you to talk with your veterinarian and carefully consider all options first.

This is one of those conditions where prevention is much preferred to treatment. While there is no 100 percent effective prevention, here are the guidelines I use in my practice.

• Feed small, frequent meals (2-4 meals per day). It’s a hassle, but the payoff is worth it. (There are some trainers who never feed their dogs out of a bowl, but who feed their dog its food as rewards for doing certain requested behaviors!)

• For dogs who tend to gulp their food, try placing large bricks or rocks in the food bowl. This forces the dog to eat around these obstacles, and slows the eating. Also check out these tips to slow down a fast eater from Dogster.

• No exercise for 30-60 minutes after a meal, and nothing hard (no hard running or playing.)

Because bloat is a true emergency, I encourage owners to be prepared at home. Ask your doctor for several large gauge needles to add to your first aid kit, and have the doctor show you how to properly perform needle decompression. This technique could save your pet’s life!

Dr. Shawn Messonnier is a holistic veterinarian in Plano, Texas. 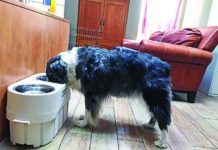 Bloat: The Mother of All Canine Emergencies 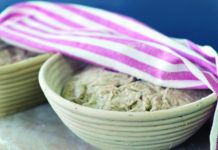 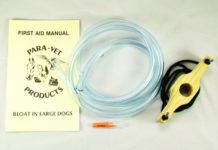 Bloating in Dogs Treatable with Gastropexy

Nancy Kerns 7
A single reported case of transmission of monkeypox from a human to a dog has prompted the U.S. Centers for Disease Control and Prevention...