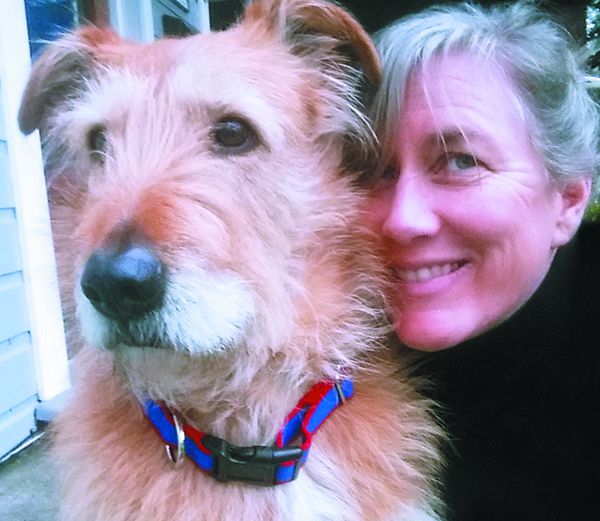 When I was 13 years old, my 19-year-old sister came home with her 3-year-old hound-mix, Frecklebelly (FB for short), and FB’s 10 puppies. My sister, who had moved out/been kicked out at age 16, wasn’t home to stay; she was just there to rid herself of the canines that had proliferated beyond her ability to cope.

My parents were likely dismayed by this development, but any aggravation they may have experienced would have been lost on me; I was in heaven. Ten pudgy, delicious, freckled puppies to play with! And the return of FB! – who had been a puppy herself when my sister stuffed her in a sack and left home, sticking her thumb into the air and departing for parts unknown with another 16-year-old girl and her dog, Jamaya. (This was 1976 – it was a different world.)

One by one, the puppies found homes. As their numbers reduced, my begging to keep one increased. I promised to support the dog myself; I’d get a job to feed him, if need be. I swore he’d be the best-trained dog on earth. I pointed out that I had always taken care of the family dogs, including FB and Argo, my other sister’s dog, whom she left behind when she went to college. I promised I’d never come home and dump puppies or dogs on my parents. And I committed to taking the puppy and FB with me when I left home.

Somewhere in all that, my mom gave up her resistance. I got to choose my pup from among the last three puppies who hadn’t yet been given away.

Frecklebelly had spent some time on a cattle ranch where a working Australian Kelpie was the only dog allowed to run free all the time; the rest of the dogs on the ranch were hounds (including FB’s mom) who lived in a big fenced pen and slept in tipped-over steel barrels that were filled with wood shavings; they only got out of the pen when the rancher took them to the mountains to hunt bears or to the slough to hunt wild pigs. The pup I chose came from the half of the litter that resembled the Kelpie enough to declare that they were half Kelpie. I called him Tavi, after the mongoose Rikki Tikki Tavi (from the Rudyard Kipling story of the same name).

I trained Tavi relentlessly with the only methods I had ever been exposed to: heavy-handed, choke-chain-based training. I wish I had known better; he was a smart dog of a working breed, but he would have been incredible if trained with the knowledge I have now. He was well-behaved, although he could be aggressive to other dogs later in life. Again, I know now that if aggression is met with aggression, more aggression ensues. Tavi, thank you for your companionship. You were a good dog; you deserved better. I’m sorry.